Published by Tense Moment Publishing, They Are Only Gone If They Are Forgotten – is the story of one of the original companies with the 82nd Airborne Division, 505th Combat Team, Third Battalion, Headquarters Company 1942-1945.

They Are Only Gone If They Are Forgotten is the story of the original members of the 82nd Airborne Division’s, 505th Combat Team, Third Battalion, Headquarters Company from inception in 1942 to demobilization at the end of the Second World War.

Steve is the son of a Paratrooper in the 505th Parachute Infantry Regiment of the 82nd Airborne Division in World War II who had been involved in 4 combat operations behind enemy lines by parachute insertion (Sicily, Italy, Normandy, Holland). Ben Powers recently had the opportunity to talk with Steve to learn more about his motivation in writing the book. 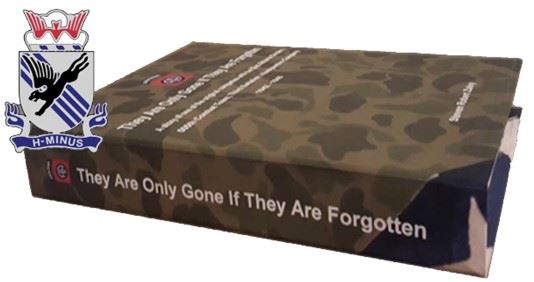 Ben: What was the inspiration for the book?

Steve: I grew up with this, listening to dad’s stories. I knew the names of the dead before I knew first-grade teacher’s name. I needed answers about what the war did to him. I went to Fort Bragg with my wife to see the origin of these stories. We stopped by the chapel and by chance met the Division chaplain. A quick story, the day dad died a Mass was said at the 82nd chapel. Anyway, I shared that with the chaplain and received an invite to come back and speak with present-day troopers. With all my questions about what dad went through, this invitation was the catalyst to begin learning more. I could never get the timing right to get back to Fort Bragg, so this dissertation never took place. If it had, I believe I never would have written the book. It would have been one presentation and done.

Ben: How did you get involved with speaking in front of students?

Steve: Once the e-book came out I was asked to speak to a group of high school students about WW2 airborne operations. I spoke at Enka high school in Asheville, North Carolina. The whole thing was well received and from there this process just started rolling; West Hendersonville High School, Asheville High School, North Buncome Country High School. The success of the school presentations led to speaking a speaking opportunity with a group of vets at the local VA dealing with post-traumatic stress, 10 – 12 months ago. This talk was very successful, and the VA is considering having me to come back to speak with a much larger group.

Ben: How did you get started?

Steve: I began the book by discussing Dad’s life prior to the airborne; working in the coal mines, dropping out of high school prior to joining the military, and signing up for parachute training and his subsequent experiences. What started as an invitation to do a 20-minute dissertation turned into this amazing book? There was more behind driving this than meets the eye. Too many things took place that went down the road that was meant to be. I had no idea of the way you go about writing a book, I started with what I knew the beginning and the end. Then It was years of the in-between. It was interesting to see how the stories began to fill the timeline. As the weekly / daily interviews with the men, my father served with. They became incredibly accurate reliving their youth.

Ben: The book is filled with information from primary sources – interviews with former troopers, photographs, and documents. How did you go about getting them?

Steve: I contacted troopers by tracing them through their serial numbers to find the town where they entered service, like Mike Klaus for example. Once I had towns, I used the internet to find phone numbers and the conversation blossomed from there. I was on the phone with them every week, raising stories that father had mentioned but did not know time and place, like whether some event occurred at Bragg or at Benning. As discussions progressed the faded memories started to come into focus. My wife encouraged me to let the troopers talk as long as they wished. When the cell phone era began we were able to have conference calls and my dad’s buddies began to interact and conversations would start with comments like “I thought you were dead!” “I never saw you again after Sicily!” The conversations led to more questions. Answering questions led to more detailed questions in order to sharpen the details of their stories. More and more memories began to resurface. I am very fortunate to have captured these stories when I did. To sit there across the tables and listen to personal stories of what took place in the actual airplanes en route to the DZ. Some of these guys were only 17 years old! Stuff like this could never be reiterated today. They’re gone now.

Ben: How often were you writing?

Steve: Every day for 20 years. In the morning before work. I took the laptop to work. I worked at General Dynamics. GD knew I was working on this and approved of using the laptop, due to proprietary info on company computers. I reviewed and wrote during lunch and breaks. General Dynamics even approved a technical writer to do proofreading as long as it was off-site and personal time. I only took a break from writing when Don Johnson and Mac McIntyre died in the same week. Their loss caused me to take a hiatus due to the mourning period for my friends. I eventually picked it back up to go forward for them.

Ben: How did you go about trying to get published?

Steve: At that point when we had compiled the book and it was ready for the next step of the journey I contacted I don’t know how many publishers and never heard a word back from over 90% of them. I decided with two proofreaders to publish an e-book. I had issues with Amazon’s policies but my sister, who works at Seattle University led me to Red Shelf. Red Shelf supplies on-line textbooks and do e-books as a side venture. So, we did an upgrade of the file and sanitized it/ refined it and the book started moving. The next step beyond was preparing the hardback edition. I met with some publishers. The first thing they wanted to do was slice and dice the text to maximize profit. I refused and stated they must use a completed file. The publishers said no. I then found out that the file was good for an e-book but was not suitable for a print book. All of the pictures would need to be sharpened, gone over and the words would need to be sent to the printer’s setbacks. This would take 1 1⁄2 years. Some of the publishers I talked with said they would get the books printed in CHINA to reduce the coast. Steve said absolutely NOT. The book would be printed in the United States. European books would be printed in London. Ultimately, I decided to self-publish under the “Tense Moment” title. I didn’t know what I was going to name the publishing company and received inspiration from a photo in the book of a paratrooper exiting a C47, known as a truly “tense moment”. We are now receiving inquiries from authors looking for publishers. After all, I went through with my dad and seeing him crying, preparing to sleep followed by a hair raising screams 30-40 minutes, two hours later… this makes it worth it. I found that dad and his friends were all exactly the same. The war had deeply affected them.

Ben: What was the hardest aspect of writing this book?

Steve: Knowing what he went through. How he saw his life and the life of his friends/brothers hang by a thread every second they were in combat. Knowing how dad was, standard paratrooper, short-fuzzed and you couldn’t reason with him (he wasn’t wrong). You could not be a defiant teenager with my father. Having spent all this time working with my father in the family business from 9 years old, he looked at me as one of his squad. There were situations that he put me in that could have been dangerous. This was the cost of war. I wanted my readers to feel the words cut like a knife. This is not a joke and people went through this. This is something that is lost in society today. PTSD was not recognized and people suffering from it were recognized as cowards. Listening about how lives were changed from these experiences was very hard.

Ben: Was your goal to learn more about father from the start?

Steve: It was always in the back of my mind circulating but it was not at the fore as the writing process began. The story was far more than one man’s participation. As I started to speak with these men on the phone and then meet with them for lunch or dinner and as I am experiencing their stories with their families in their homes. They spoke to me about things they would never have told an author. To see their stories coming to life and listening to this, I didn’t want parts of it. I wanted all of it. Even the things a (professional) author would have disregarded. I guess this is how we ended up with 623 pages.

Ben: Did you find anything that was surprisingly easy about writing?

Steve: The stories are basically in their words. I was the vehicle that pulled it all together. I didn’t want my name in the book. It wasn’t fair, and I did not want to take glamour and glory from these men. The historian/proofreader on the project advised me to put my name on the book to ensure another author could not take the title. The reward was to listen to these men. My father was proud of what they went through and survived. It mattered that someone actually cared about what these men went through. To them, it was a miraculous thing that someone took the time to hear what they had to say.