The Commander’s Voice is the story of the All American’s Combat Communicators in the First and Second World Wars.

Christopher “Moon” Mullins is a former paratrooper with service in the 82nd Airborne Division (served as the S-3 Air NCO and the Assault CP Platoon Sergeant in the 82nd Signal Battalion, 307th Engineer Battalion Commo Chief, and 505th P.I.R Brigade Commo Chief), Long Range Recon (F Co 51st Inf), and 5th Special Forces Communications Support (B-Team). Moon retired from the US Army in 2000 after 20 years. He holds an associate degree from Georgia Military College as well as a bachelor’s and master’s degrees in IT from Kaplan University. In 2016, Moon published a book about his father’s service in World War II titled, Lucky Mullins, available on Amazon.com. He reviews books for ARgunners.com, Pen and Sword, Osprey, Oxford Press, and independent publishers. Moon is married to Bhavna Mullins and they make their home near Atlanta Georgia. This is his third book.

Ben Powers, historian for the General Dennis Via All Airborne Signal Chapter of the 82nd Airborne Division Association, recently had the opportunity to talk with Moon to learn more about his motivation in writing the book.

Ben:  What was the inspiration for this book?

Moon:  The concept for the book came about a few years ago when I started reading and reviewing military history books for an online magazine. I noticed that although there were a ton of books about the Parachute Infantry Regiments of the 82nd, there were no books written about the Separate Battalions like the 82nd Signal Battalion. That bothered me. When I started thinking about all the great units I have been in, Special Forces, Long Range Recon, the 82nd, 1st Armored Division, they were combat arms centric. I get that. But IMPO there is certainly room at the grown-up table for these types of military history books for the support units. Compounded by the fact that the 82nd Signal Battalion was one of the original units of the 82nd Infantry when it was formed over 100 years ago! So, researching and writing a book about our Airborne Signal History seemed to be the path I was looking for.

I think this book goes a long way towards providing a solid, stand-alone history of one of the major tenants of “Shoot, Move, and Communicate” when it comes to telling the story of the 82nd Airborne Division.

Ben:  When did you decide upon a military career?

Moon:  As a teenager in Northern Kentucky, there wasn’t much there after high school except trouble with drugs, drinking, and overall bad behavior. The Army was the place I belonged to. AS I elaborate in my first book, Lucky Mullins, I was the youngest of seven and I was looking to have something of my own. My own team, my own family, my own house, and the Army helped me straighten my life out and push me towards those goals.

Ben:  How did the Signal Battalion differ from other units you served in?

Moon:  It was different. Our Battalion and its history of diversity, placing Black and Hispanic soldiers in leadership positions and pushing them to the front as they accomplished the mission. Anyone who had their head out of the sand noticed this. We took a lot of pride in our job. We were very proud to wear that 82nd Patch but we were also proud to be Signal.

Signal soldiers are normally selected or singled out in line units because they are sharper and smarter than the average soldier. We have proven that in special forces and conventional units as well. The Signal Battalion assignment was a great one for me. I was ready for it and it was ready for me. My first 6 months were getting my schools out of the way such as Jumpmaster, loadmaster, DZSTL, and the like. Shortly thereafter we deployed to the Gulf War and I was happy to put those skills into practical application by ensuring our first responders got out of Green Ramp with MREs, chocolate chip uniforms, basic loads, and all items they needed for a typical 82nd deployment. Although we were not allowed to conduct jumps in the theater, it didn’t stop us from airborne refresher training, looking for aircraft and making all the preparations for jumping just in case they changed their mind. At the end of the war, I was also there to ensure everyone got back home on civilian aircraft. I went on to lead one of the best communications platoons in the Army, the Assault Command Post Platoon that was responsible for the CG, his staff, and the Division Assault CP deployment packages that included manpack TACSAT (tactical satellite radio), FM, HF, Retrans (signal retransmission), and long haul Sat Comms as well. We were given priority over new soldiers assigned to the Battalion and the command team ensured we got the best soldiers as they came in. As many have said before me, the 82nd Signal Battalion was my most rewarding and at the same time, my most difficult assignment and I would not have wanted it any other way.

Ben: Did your time in the Signal Battalion influence your leadership style?

Moon:  Leading the finest signal soldiers has an impact on you. They are constantly checking you, ensuring you have what it takes to lead them. They see and hear all the little things you do.

I respected and loved my soldiers and asked them to do near-impossible tasks. But I never asked them to do anything I didn’t do, or could not do. That’s important. If you push them hard and they know you are right there beside them pushing with them…they won’t disappoint you. I still am in contact with my platoon soldiers and we meet up every few years to hang out with each other, drink beer, go to the firing range, and swap stories. Our small group of soldiers keep an eye out for each other and talk constantly. That camaraderie and closeness are hard to emulate in other assignments outside the airborne community, but It can be done. I was able to carry those leadership traits over to my follow-on assignments with a great deal of success.

Ben: Did any specific leaders have an impact on you?

Moon:  Quite a few. They are legends in the Signal Battalion, leaders like, CSM Bill Moore, CSM Mike Somerville, CSM Bobby Bell, Colonel Al Johnson, Colonel Rock Schmidt, Colonel Bill Bell. All great Americans. All served as mentors or reluctant mentors for me.

Ben:  What sparked your interest in military history?

Moon:  History is something you have to get right! Just like communications, or making comms, when you see someone doing it wrong you should step in, say something, and show them how to do it correctly. I hope I have fulfilled that need through my leadership over the years as well as in my civilian life in my books, critiques, and articles.

Ben:  How did you get started as an author?

Moon:  I have been writing since I was 12 or 13. It started as prose and poetry but evolved into something cathartic for me. Some people are made to be storytellers. I would like to think that when people read my books, they hear my voice talking to them. I have received that same type of feedback for some of my writing and it makes it all worthwhile and rewarding for me.

Ben:  Have any authors or historians influenced your writing style or research methods?

Moon:  I think the writers that have had the biggest impact on me are American writers such as Mark Twain, Faulkner, Steinbeck, and Hemingway. Not necessarily the content of what they wrote but more the context and voice they wrote in. Simple, easy to understand, common sense writings that strike home with a sense of authenticity!

Ben:  Did you have access to any primary sources?

Moon:  I struggled with this area. When I first started the research, it bothered me that there was a small population of Signal Soldiers that jumped into Sicily, Salerno, D-Day, and Market Garden and we did not even know their names. I couldn’t come to grip with it. A friend reminded me that, even if we did have those men’s names, what would you do with the info? How important is it? How does that info reconcile the untold stories? At the end of the day, he was right, they won’t reconcile! It was important for me to move past that.

Ben: How often were you writing for this book?

Moon:  I did not have a set pattern. I would set small goals for myself on a whiteboard of planned interviews and chapters I wanted to finish by certain deadlines. I kept track that way and it helped me keep stress levels down. I kept this whiteboard and list of tasks in my office so that I would see it every day. I set realistic expectations for myself and tried to maintain a sense of humor throughout the end to end process. You have to operate with these kinds of control mechanism or you will drive yourself mad.

Ben:  How did you go about trying to get published?

Moon:  I asked around and the publishing house type of hardcover costs were unreasonable to me. I have a history of self-taught in playing music, writing code in Turbo C++, building computers and I figured self-publishing need to be on that list as well. I found out that people that were self-motivated and self-publishing were using online tools to accomplish their writing goals. I looked into it and probably spent a few weekends learning the Create Space Tool, which later became Amazon Kindle Publishing which is a subsidiary of Amazon. 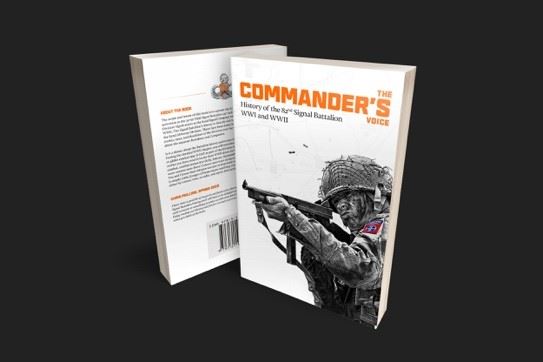 Ben:  What was the hardest aspect of writing this book?

Moon:  Ensuring I live up to my own tough standards! What did I want to see in the book? What would make this a great book versus a normal book? These guiding principles helped me self-correct and adjust to the tasks I needed to complete to reach the end state; a published book that can stand the test of time with my Signal Brothers and Sisters.

Ben:  Did you feel any sense of kinship with WW1 or WW2 soldiers as a result of writing this book?

Moon:  Definitely! Like me, those soldiers were average, everyday signal soldiers that just wanted to do their job and get back home to their families. Some of them did not make it home. After my service in two wars, I made it home. I am thankful for that and try not to forget that when I am writing articles about those that have passed on the Field of Honor. There are many common threads between modern signal soldiers and those WWI and WWII signal soldiers. I hope that some of the Signal Soldiers that read this book will also find a kinship as well. If that is true then I have accomplished my goals.

The History of the 82nd Signal Battalion World War I and World War II: The Commander’s Voice is available from Amazon.com.