‘Oder Front’ author A. Stephan Hamilton takes on the ultimate researcher’s challenge – Berlin during the chaotic final months of the Second World War. Here, we take a closer look at how Volume 2 is set to break new ground – examining the operational-level detail of the German defence of the Oderfront between January and May 1945.

Tell us about yourself

I live in Virginia with my wife and two children. I work full-time and serve as a Lieutenant Colonel in the U.S. Army Reserves. I have a B.A. and M.A. in History and I enjoy researching and writing when not engaged in the normal routines of family life. I also enjoy other activities (when I can find the time) like martial arts; wreck diving and mountaineering.

This is the second volume of the ‘Oder Front’ series. Did you always envisage writing two volumes or was this dictated by the wealth of source material?

I never thought I would write more than one book. After authoring ‘Bloody Streets’ I realized I needed to focus a book on Generaloberst Gotthard Heinrici and his command of Heeresgruppe Weichsel because he was such an overlooked, yet prominent figure during this period of the Second World War.

After writing Volume 1 the sheer scope of material I had – coupled with the fact that other histories often characterise the events of this period inaccurately – compelled me to write Volume 2.

Is Volume 2 a continuation of ‘Oder Front’ or do they have their own unique focus?

‘Oder Front Volume 1’ is an operational study of Gotthard Heinrici’s command of Heeresgruppe Weichsel – the final defensive army group outside of Berlin – in the last few months of the war in Europe.

Volume 2 focuses on Heinrici’s predecessor in command of Heeresgruppe Weichsel, Reichsführer-SS Heinrich Himmler, which includes his operational decisions and the entire scope of rebuilding a shattered defence outside of Berlin after the disastrous Soviet winter offensive of 1945.

Moreover, every single combat division – including important smaller military formations that served along the Oder Front from January to May 1945 – are detailed in this volume. This second volume is intended to be an academic study (a reference book if you will) that other researchers can use as a departure point in their study of the period.

Where did the idea for the ‘Oder Front’ books come from and how did you source your primary material?

They were natural extensions of my historical inquisitiveness. I sought to answer questions that had perplexed me and that were not addressed in other works of the period.

Almost every book written about the end of the Third Reich in Europe tends to focus on the machinations of Adolf Hitler and other high-ranking Nazis in the Führerbunker during the last few weeks of war. Few delve into the military operations and command decisions made by senior generals, or how these decisions played out on the battlefield.

The source material for such research is difficult to locate based on the fact that many records were lost in the chaos of the period and there were orders to destroy military documents at the end of the war. However, diligent searching and helpful guidance from other prolific researchers has turned up extensive and previously unpublished primary documents and personal accounts.

As an academically-trained historian, I try to source all my works. In Volume 2 alone I have included more than 1,400 end notes – the majority of which are primary source citations – which provides other intrepid authors the ability to continue to research beyond where mine ended. 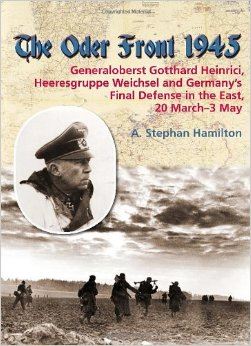 What is the one thing – a lesson or key piece of learning – you think your ‘Oder Front’ books convey?

I learned that the end of the Second World War might have concluded very differently – with far-reaching political and military implications for Europe – if Generaloberst Gotthard Heinrici’s desire to force the Supreme Allied Commander Dwight D. Eisenhower to order his forces across the Elbe River and occupy Berlin before the Soviets had occurred.

Was there anything you learned during the course of your research that surprised you?

I learned how closely my own family history was intertwined into these events, which might not have been the answer you expected!

As I note in the introduction to Volume 2 my Lithuanian grandmother trekked across Prussia and Pomerania into Northwest Germany that winter of 1945 behind the lines of Heeresgruppe Weichsel with the intent to reach the Western Allies. Her family had been sent to the Soviet Gulags after the Soviet occupation of Lithuania in 1940 where she lost both her mother and father to the barbarism of Communist-forced labour camps.

On her trek west she bore witness to the ferocity of fighting early on, but was spared from some of the worst horrors that befell many of the women, old men and children on that long march from the east.

Her own history parallels the military decisions and operations of this period, as it was among the withdrawing formations of the 3. Panzer-Armee in early May of 1945 that she ultimately reached the lines of the advancing U.S. 82 Airborne Division that was operating in the area of Schwerin with Sir Bernard Montgomery’s 21st Army Group.

How long did it take you to write the two books individually and how did you secure a publication deal with Helion & Company?

Volume 1 took about two years to author as it was based off Heinrici’s unpublished account of his command – in other words it was fairly straightforward. 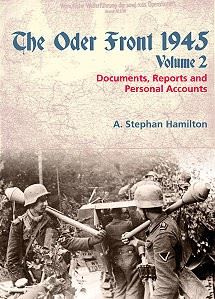 Volume 2 on the other hand took five years. In the case of Volume 2, the length of writing this book was due to the difficulty of piecing together the various accounts and documents of the period – as well as the sheer volume of translation work. I reviewed more than 20,000 pages of documents and translated near a thousand pages in the process! I do not think I will ever write a book this complex again.

I secured a publishing deal with Helion & Company mainly because they took a chance on me based on the vast amount of new research and quality of documents I had acquired. I doubt other publishers would have been so adventurous!

Have you any plans for a Volume 3?

Yes – big plans. Volume 3 will be the final capstone to the series. In Volume 3 I will revisit the Battle of Berlin.

Drawing on the material for the original ‘Bloody Streets’, I will add hundreds of new and unpublished personal accounts by German and Russian soldiers. Additional detail and context will be drawn from primary documents previously unknown or accessed.

As in ‘Bloody Streets’ I will detail the tactical fighting across the urban landscape of Berlin day-by-day, street-by-street – and in some cases detail the fighting that occurred in a building’s interior room-by-room. The vast amount of material I have might result in Volume 3 actually having to be split into two separate parts published simultaneously.

How many books have you written in total and what are their titles?
‘Bloody Streets’; ‘Oder Front Volume 1’; ‘Oder Front Volume 2’ and I am currently completing the divisional history of Panzergrenadier-Division ‘Brandenburg’, which covers its organisation and operations from January to May 1945 using a lot of new and unpublished information.

Your works are heavily focused around the latter months of the Second World War. Is there a reason why this period of history interests you so much?

Mainly for three reasons. The first is that there are so few works of history focused on the military events of the period, as most books have been overly focused on the machinations of the Führerbunker to the exclusion of little else.

The second reason is that despite the difficulty in finding material, there is a wealth of primary documents and first-person accounts for the period that have gone untapped by researchers. The material is far more difficult to work with due to the chaos of the final few months of the war, but is extremely rewarding from a historical context.

The third reason is that I personally feel that there is very little left to write about regarding the more well-known campaigns of Normandy; Ardennes; Stalingrad and Kursk.

What are your future aspirations in terms of your military history writing?

Beyond the upcoming history of Panzergrenadier-Division ‘Brandenburg’ and Volume 3 of the ‘Oder Front’ series, I do have plans for several books about U-Boats and the Battle of the Atlantic.

However, at some point it will be time to take a break and possibly go back to school to study for a Doctorate in History or Philosophy.