If the hallowed ground of Arlington National Cemetery could reveal its secrets, it would tell tales of heroism and tragedy that would make American hearts break even as they swelled with pride. Perhaps no tale is more heart-wrenching than that of Ira Hayes, the World War II hero of Iwo Jima. The Pima Indian was laid to rest on February 2, 1955, in Section 34, Plot 479 A of Arlington National Cemetery.

The image of the raising of the flag on Iwo Jima would become famous as a photograph, a postage stamp, and a statue, but for Ira Hayes, surviving the battle meant living his life in the shadow of a fame he never sought, tormented by the memory of the friends who did not return.

He was born on January 12, 1923 in Sacaton, Arizona, where he went to grade school. When the family moved to Bapchule, Arizona in 1932, Hayes attended the Phoenix Indian School, but after the attack on Pearl Harbor, Hayes’ sights were set on becoming a Marine. After two years of high school and two months in the Civilian Conversation Corps, Hayes enlisted in the Marine Corps Reserve in 1942. 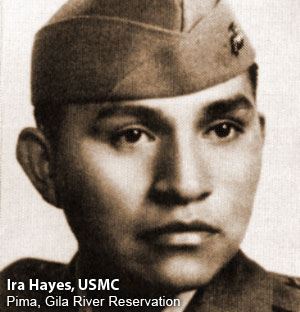 After boot camp and Parachute Training School, he was promoted to private first class and sent to New Caledonia in 1943. September of 1944 saw him sailing to Hawaii to train with the 5th Marine Division, which was headed to Japan.

They landed on Iwo Jima on February 19, 1945. The American forces needed a convenient location where damaged B-29 bombers could land and a base for escort fighters who would assist in the bombing against Japan. But Iwo Jima, with its intricate network of tunnels, caves, and underground installations was defended by 23,000 Japanese troops. Taking the island away from its fierce defenders would not be easy and the price in human life would be high.

On February 23, the fifth day of the battle. the American flag was raised on top of Mount Suribachi. Mount Suribachi was an extinct volcano overlooking the beaches, but it was alive with fortified caves, tunnels, underground installations, and storage depots. The fighting was deadly. But as Hayes would discover, the symbolism would prove to be equally lethal over the long term.

Later that day, Sergeant Michael Strank took Hayes, along with Corporal Harlon Block, Private First Class Franklin Sousley and Private First Class Rene Gagnon to go up Mount Suribachi with supplies and a more impressively sized American flag. Strank, who had come to the United States as an infant, was the son of a Czechoslovakian coal miner. Block was the son of Seventh Day Adventists who were opposed to war. Sousley, who hailed from Kentucky, had lost his father when he was eight years old. French-Canadian Gagnon, from New Hampshire, was the son of mill workers. Only war could have brought such an assortment of unlikely heroes together and only America could have been their homeland.

They took down the small flag and raised the larger one, an act immortalized by the camera of Associated Press photographer Joe Rosenthal. 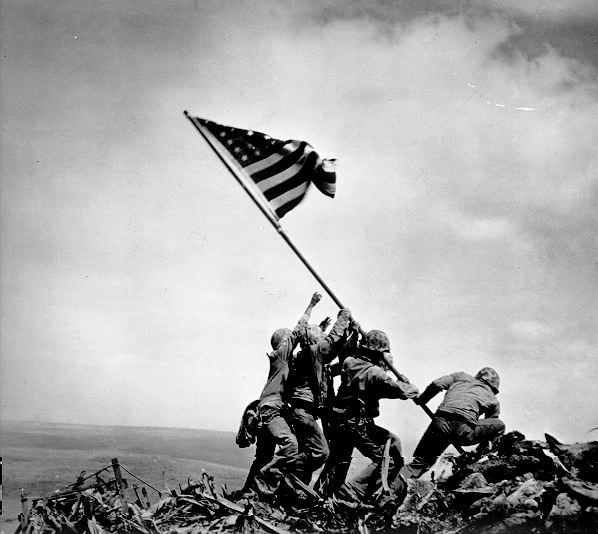 A week after the second flag was raised, the outfit took part in an assault on heavily fortified terrain. Strank, the squad leader who was like a father to his men, led the soldiers to take cover from the sniper fire. A shell that is believed to have come from an offshore American destroyer exploded and killed Strank. Harlon Block took over until a mortar round left him with his intestines pouring out on the ground. Sousley was killed by a sniper.

On March 14, the flag that Hayes had helped to raise was taken down and a new flag raised, signifying the occupation of Iwo Jima by the Marines. Fighting continued until March 26 when the island was secure. Deaths for American sailors and soldiers came to 6800, and more than 19,000 were wounded during the 36 days of fighting to secure the island. Medals of Honor were awarded posthumously to 27 sailors and soldiers; no other single American engagement matches that number.

On March 27, Hayes, one of five Marines to survive out of the platoon of forty-five men, left Iwo Jima with his unit. He had suffered no wounds, at least none that were visible. He returned home a hero. But he was about to learn that symbolism was more important than truth. Sergeant Henry Hanson was incorrectly identified as one of the Marines who had raised the flag in the iconic photograph, but Hayes knew that Hanson had been part of the first flag raising. Harlon Block, not Hansen, had been the Marine in the photograph. Hayes’ attempts to tell the truth were silenced by a Marine Corps officer.

In 1946, Hayes traveled from his home in Arizona, walking and hitchhiking, to Weslaco Texas, where Harlon Block’s family lived. He told them that their son was one of the men raising the flag in the photograph. The family wrote to their congressman and in 1947, the Marine Corps corrected the error.

But the invisible wounds of war did not heal for Hayes and he was not comfortable being hailed as a hero when his friends had died. Hayes was honored for his heroism; he went on a bond tour, met President Harry Truman at the White House, received a Navy Commendation from the Marine Corps, was praised by President Dwight Eisenhower at the dedication of the Marine Corps War Memorial. He even played himself, receiving the flag from John Wayne, in the film Sands of Iwo Jima. 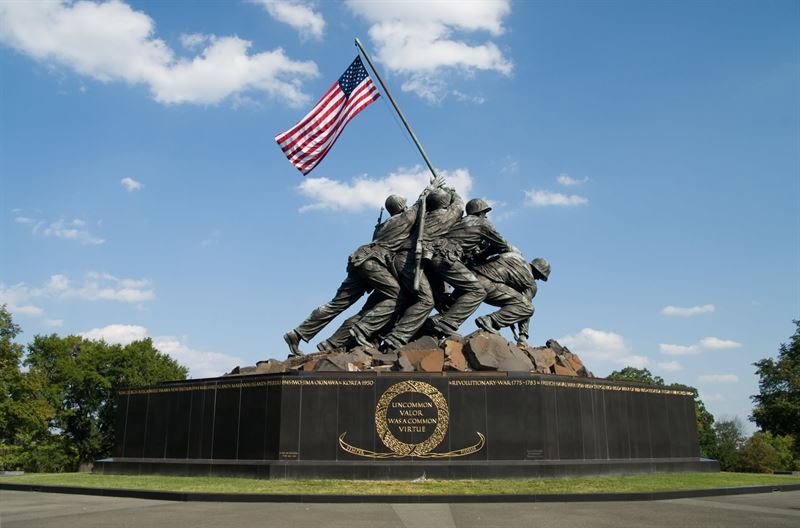 But the hero who returned to civilian life could not hold down a job. He was arrested 52 times for public intoxication. He seldom talked about the events that had led to his immortalization in a photograph, a memorial, and America’s best-selling postage stamp. Explaining his inability to return to normal life after the war, Hayes said, “I guess I was about to crack up thinking about all my good buddies. They were better men than me and they’re not coming back.”

On January 24, 1955, after steady drinking at an all-night poker game, his body was discovered in an abandoned hut on the reservation. The cause of death was exposure and alcohol poisoning. 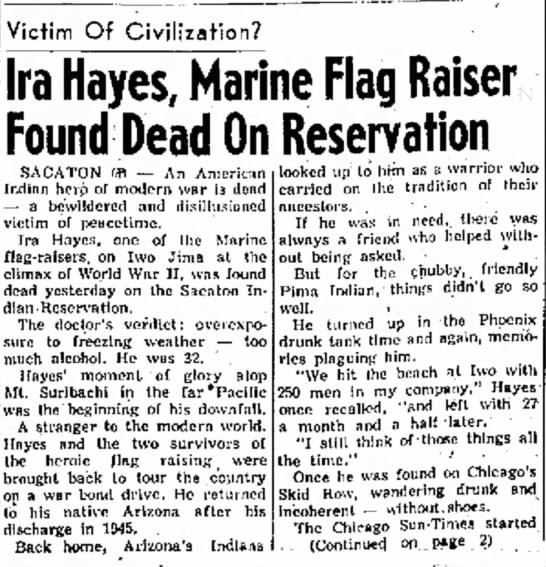 Arizona honored its native son with the biggest funeral in the state’s history and Arlington National Cemetery gave his body rest. Perhaps his soul returned to Iwo Jima.

1 thought on “Ira Hayes, The Haunted Hero of Iwo Jima”