A former crew member of the Battleship Musashi of the Imperial Japanese Navy that was sunk by U.S. forces during World War II, said he felt “a sense of destiny” in the apparent discovery of the battleship by a U.S. billionaire almost 70 years after the war’s end.

“I never thought the Musashi would be found,” said Reiichi Chigira, 90, of Yokosuka, Kanagawa Prefecture, on Friday. “I want to see her with my own eyes.” His eyes were glued to video footage of what appeared to be the Musashi.

The Musashi was the second Yamato-class battleship. It was sunk in the Sibuyan Sea in the Philippines in October 1944.

Chigira became a Musashi crew member at the age of 18 in August 1943. When he saw the Musashi, said to be the world’s largest ship at that time along with her sister ship the Yamato, he thought it was “just like an iron castle” and would never be sunk.

After the course of the war worsened for Japan, the Ship Musashi joined an operation off the Philippine island of Leyte in October 1944.

However, the ship came under attack by numerous U.S. warplanes when she was sailing in the Sibuyan Sea on Oct. 24. Chigira said his comrades were tossed by a bomb blast and the deck was covered with blood.

After five hours of bomb and torpedo attacks, the Musashi tilted by nearly 90 degrees and sank on the evening of Oct. 24. Many crew members were pulled into the sea. Chigira was rescued after drifting for about four hours. 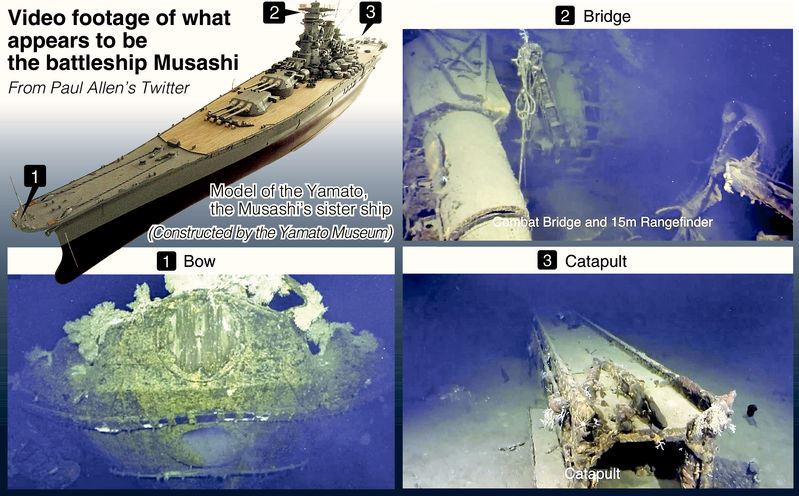 “The time I spent on Musashi was my entire life,” Chigira said. He said he had wondered where the battleship lay, and that he hopes the personal belongings of the dead and their remains will be recovered from the wreck on the seabed.

Microsoft Corp. cofounder Paul Allen has been trying to identify where the Musashi sank for more than eight years, spending his own money on the search.

Allen said on his Twitter on March 3 that he had found the Musashi, and posted several videos of what appeared to be the battleship on his website and elsewhere.

According to Allen, a camera attached to an underwater exploration device filmed the battleship on the seabed about one kilometer below the surface.

Allen said he became interested in military history because his father was a soldier during World War II. He said he plans to work with the Japanese government to make sure the site is treated properly and in keeping with Japanese tradition as a graveyard of war dead.

Article provided by The Yomiuri Shimbun.