Marie Curie may be one of the world’s best-known scientists, but some of her most important work took place not in the laboratory, but on the front lines of battle during World War One. Marie Sklodowska Curie started life in 1867 in Warsaw, Poland, but in 1891, she left home to study physics and mathematics at the Sorbonne in Paris and it was in France that her reputation was built. In 1903, she and her husband, Pierre, having discovered the elements radium and polonium, shared the Nobel Prize for Physics with another researcher. She would win another in 1911, this time for chemistry, but by that time, she was a widow; Pierre was killed in 1906 when he was run over by a horse-drawn carriage while crossing a busy Parisian street.

Curie’s pursuit of science had not been aided by the resentment and distrust of her male peers, who didn’t believe that a woman could possibly be their intellectual equal. The French Academy of Sciences had been unwilling to welcome her as a member for her scientific achievements. Several year’s after Pierre’s death, she entered into an affair with a fellow scientist who was married. The spurned wife, who had letters that Curie had written to her lover, sent the letters to French newspapers, where they were published, and the public turned against Curie. In 1914, her Radium Institute was completed, but the year also brought the outbreak of World War I, which took her male laboratory workers off to fight. She had one gram of radium to use for her research, not enough for her to experiment with during the war. She wanted to do something for the war effort. She was willing to have her Nobel Prize medals melted down to provide the gold that the French government needed, but the bank wouldn’t do it. So she donated the prize money she’d received and bought war bonds. But she wasn’t satisfied.She couldn’t do the research that had made her reputation, so she opted to try something else: X-rays. Knowing that war inevitably meant injuries that would require medical attention, Curie thought that X-rays could offer a new technology for the soldiers who were destined to be in harm’s way. X-rays on the battlefield could save lives.

She was named the head of the radiological services of the International Red Cross. She studied anatomy books. She learned to drive and how to fix automobiles. She taught herself how to use X-ray machines and trained medical professionals in the usage of the X-rays. She went on a fundraising campaign to raise money and by October, 1914, she had a traveling X-ray unit in a Renault van, the first of 20 that she would outfit.

The “Petites Curies” came with a generator, a hospital bed, and an X-ray machine. But once again, she had to sell the idea to the medical establishment, just as she had had to sell the science establishment on her qualifications as a researcher. Doctors were skeptical that radiology had a place on the battlefield. So Curie headed to the Marne where a battle was raging to prove the value of the X-ray machines. 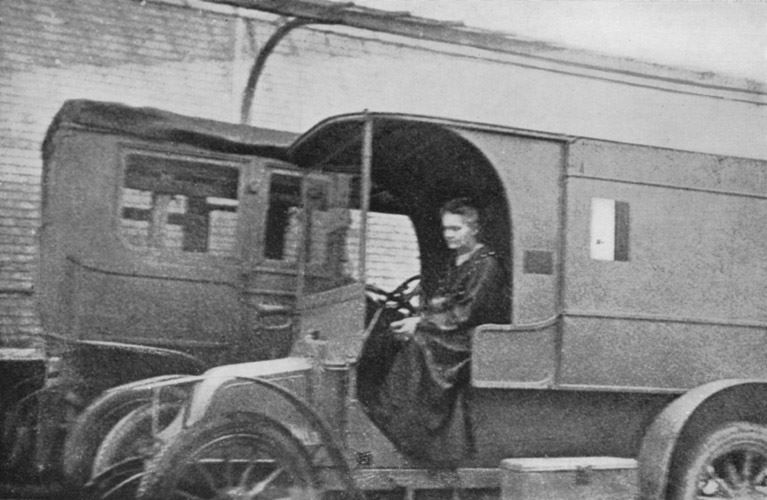 She was able to detect the presence of bullets and shrapnel in soldiers who came to the van to be X-rayed, making the work of the surgeons on the front lines easier because they knew where to operate. Curie was galvanized by the need for more X-ray units. In addition to the mobile vans, she wanted to add 200 stationary x-ray units. But the army was as dubious about her idea as they were about the new military technology like the tank and the machine gun. Once again, Curie wouldn’t take no for an answer. She gave X-ray training to 150 women so that they could provide radiological diagnoses for the soldiers. Over a million French soldiers benefited from the Petites Curies and the accessibility of X-ray machines on the front.

When the war ended in 1918, Curie, like other celebrating Parisians, took to this streets, but with a difference. She was driving a Petite Curie.

But ultimately, Curie’s sacrifice for science and for the war proved lethal. She didn’t know that the radiation was deadly and the years of exposure—she had the habit of carrying test tubes in her pockets and although she noticed the way they emitted light in the dark, she didn’t understand that the glow was an indicator of danger—led to health problems and ultimately leukemia, which killed her in 1934. Even now, her notebooks are so radioactive that anyone wishing to view them where they are stored at the National Library in Paris, has to put on protective garments and sign a waiver.