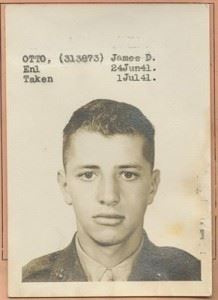 The Department of Defense POW/MIA Accounting Agency (DPAA) announced yesterday Dec. 4 that the remains of a serviceman, unaccounted for since World War II, have been identified and are being returned to his family for burial with full military honors.

Marine Corporal James D. Otto, born in Los Angeles, was only 20 years old. He will be buried Dec. 8, in Arlington National Cemetery. In November 1943, Otto was assigned to Company L, 3rd Battalion, 8th Marines Regiment, 2nd Marine Division, which landed against stiff Japanese resistance on the small island of Betio in the Tarawa Atoll, in an attempt to secure the island. Over several days of intense fighting, approximately 1,000 Marines were killed and more than 2,000 were wounded. Otto was reported killed in action on the first day of the battle, November 20, 1943.

In the immediate aftermath of the fighting on Tarawa, U.S. service members who died in the battle were buried in a number of battlefield cemeteries on the island. In 1946 and 1947, the 604th Quartermaster Graves Registration Company conducted remains recovery operations on Betio Island, but Otto’s remains were not recovered. On Feb. 10, 1949, a military review board declared Otto non-recoverable.

In June 2015, a nongovernmental organization, History Flight, Inc., notified DPAA that they discovered a burial site on Betio Island and recovered the remains of what they believed were U.S. Marines who fought during the battle in November 1943. The remains were turned over to DPAA in July 2015. Of the 16 million Americans who served in World War II, more than 400,000 died during the war.