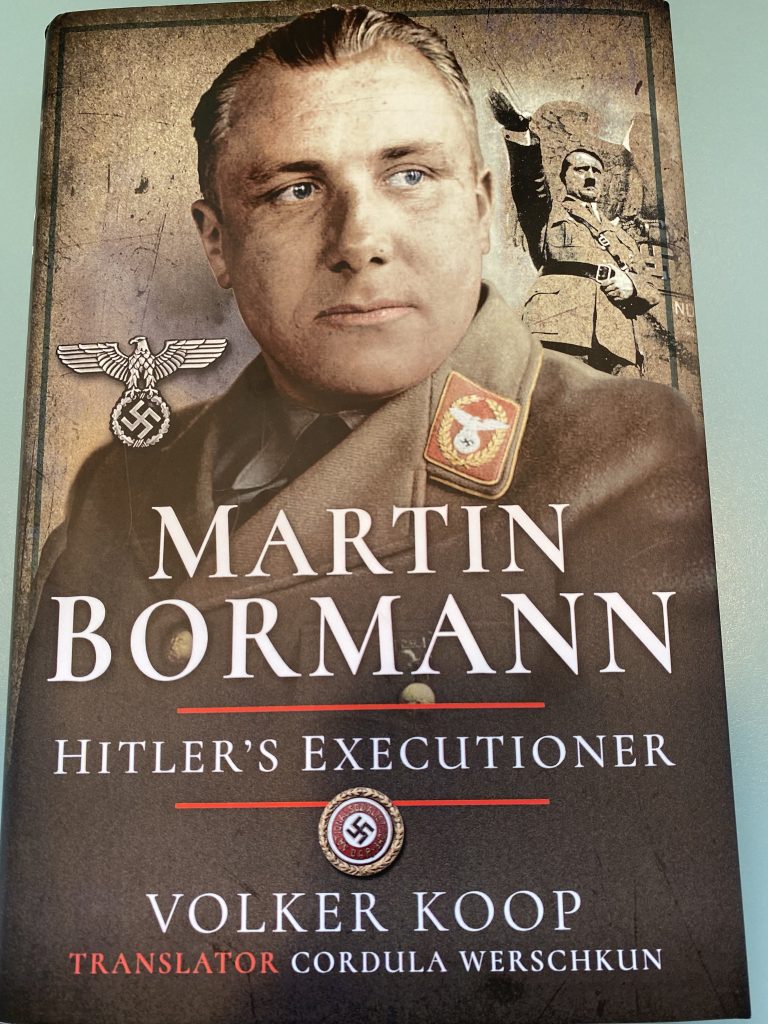 Being there . . . . alongside of and keeping pace with a man incapable of peace, hope, and joy,
Martin Ludwig Bormann, the second in control of the Third Reich, on occasion more powerful
than the Fuhrer himself, a Nazi of pure, unadulterated evil . . . . .
MARTIN BORMANN – – A NEW BIOGRAPHY OF THE INAUSPICIOUS POWER OF WILLFUL MURDER
BEHIND HITLER’S THRONE
“The Chief of the Security Police and of the SD and Head of the Reich Security Main Office,
Ernest Kaltenbrunner, had to report on the mood within the population after the assassination
attempt to kill Hitler, not to his superior Himmler, but to the head of the Party Chancellery,
Bormann. This is proof of Bormann’s elevated position, who on the day of the assassination
attempt, July 20, 1944, seems to have been the only person in Hitler’s entourage who kept his
cool and picked up the reins.”
Reviewed and Highly Recommended by Don DeNevi
“MARTIN BORMANN – – Hitler’s Executioner”, by Volker Koop. Frontline Books, Pen & Sword
MILITARY: 325 pages, hc; $34.95. See: Uspen-and-Sword @ casematepublishers.com;
www.frontline books,com; www.frontline books.com.
That Martin Ludwig Bormann rose in rank to be one of the most powerful, most feared men in
Hitler’s Thousand Year Reich is not debated. Yet it is true this obsessive neurotic wasn’t among
the Fuhrer’s coterie of inveterate followers, although he was assigned by the Fuhrer to
administer his entire apparatus of terror and murder, which he accomplished so conscientiously
and effectively that some in the Party and military believed HE was the actual clandestine ruler
of Germany!
Truth was that most in the Hitler greater circle, behind the Secretary of the Reich’s back, he was
sarcastically referred to as the “Brown” or “Gray” Eminence, depending upon which color of
uniform he wore that particular day while acquiescing and serving his boss, if not, standing
behind him. For a few like Himmler, Goring, Heydrich, and even Goebbels, the “gray” meant
“dull”, “stupid”, “bland”. To them, an “Eminence” he was not, and that the only achievement in
his life was to adequately inform others of the wishes and decisions of Hitler. None dared to
make an open enemy of him. Terrifying them was the fact, which Hitler seemed to appreciate
more than the man’s competence and absolute loyalty, that Bormann was not a man who in
order to gain or secure his own power forged alliances, sought out factions, or accepted
compromises. This he explicitly showed time and again. On the contrary, he went in exactly the
opposite direction. He affronted potential rivals and showed no consideration for their feelings.
And he didn’t care. He behaved as a brute because he was certain of Hitler’s absolute trust. In
the end Bormann was a powerful man, but also exceedingly lonely.

Martin Borman was a riddle, inexplicable, inscrutable, puzzling, an enigma, which is precisely
the way the Fuhrer wanted it, as he pitted the others against each other. By dividing them, he
could secure his own safety and security,
Thus, author Volker Koop, a freelance author and journalist mainly on topics of German and
European post-war history, has presented us with the latest known information about this
callous Nazi official, how he took over the Party, consolidated power, and by 1942 was Hitler’s
deputy and closest collaborator. As supreme military commander, the Fuhrer turned more and
more of the domestic issues over to him. Then, to make it all official for the German nation,
Borman, on April 12, 1943, was appointed Personal Secretary to the Fuhrer. Feared by
ministers, Gauleiters, civil servants, judges, and generals alike, Bormann identified strongly with
Hitler’s racial politics, determination to exterminate the entire Jewish race, work forced labor to
death, and, from 1944 – through to Hitler’s suicide on April 30, 1945, serve as the nation’s
indispensable executioner.
The most riveting reading of the biography begins in January, 1945, when the Third Reich
begins to collapse. Remaining at Hitler’s side until his final 30 minutes before chomping on a
cyanide pill while placing the nozzle of his Walther pistol into his mouth and pulling the trigger,
Bormann with two others flee the Fuhrerbunker. The rest, Reader, you must read for yourself.
You won’t put the book down