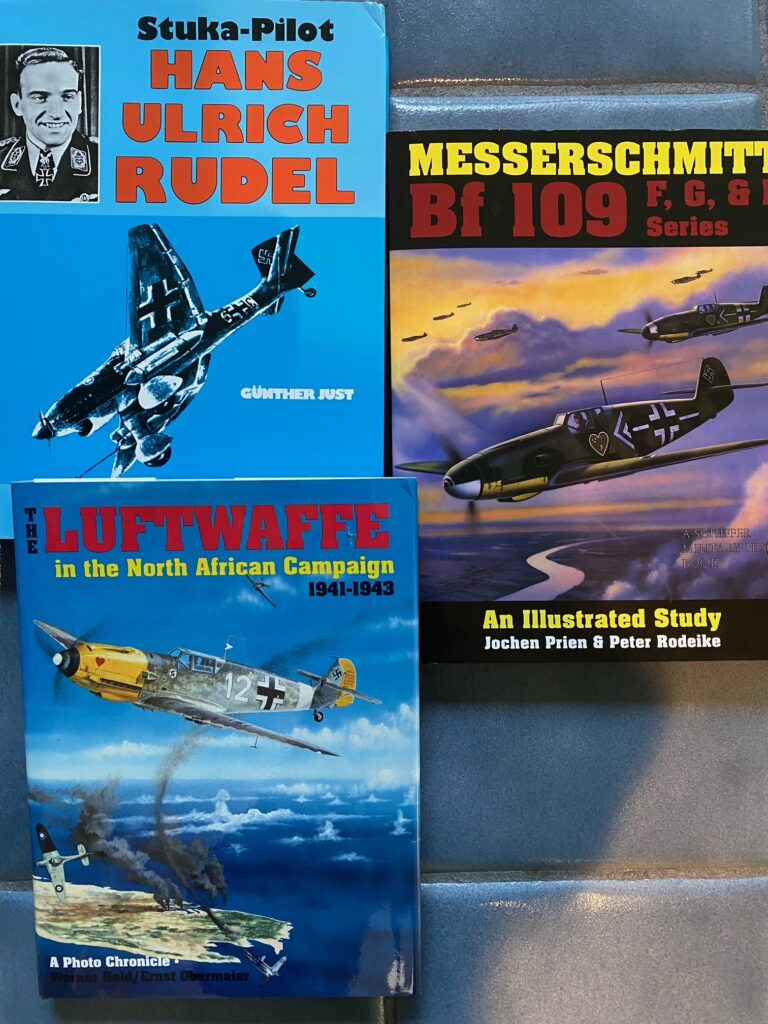 Being there . . . . on the early afternoon of August 13, 1940, for the Adlerangriff, or Eagle-attack,
the first day of the German bombing offensive against British airfields and aircraft factories, and
a day when the enemy Messerschmitt Bf 109s flew continuously prominent attacks. Two days
later, watch the Luftwaffe try to strike an all-out, one-day, blow, hoping to simultaneously crush
the Royal Air Force, and its Polish, Belgian, and French air force subsidiaries. Then, comfortably
seated, observe with trepidation all of August 15 th “Eagle Day”, which resulted in the heaviest
air battle fought in the Battle of Britain, nay, the greatest in the history of world aviation. Ten
days later, relish the RAF’s retaliatory raid on Berlin, the first of more than 800 that would
follow during the next five years, a rare raid directly ordered by the angry Prime Minister
Winston Churchill, himself.
Again, thanks to Schiffer MILITARY HISTORY Publishing, Ltd.
WITH UNPARALLED STRENGTHS, AND THE ADVANTAGE OF TWO AGAINST ONE, THE
MESSERSCHMITT ME 109, RULED THE SKIES OVER EUROPE – – – THAT IS, UNTIL BRITISH DESIGN
INGENUITY, AMAZING LOGISTICS OF MASS PRODUCTION, AND BRILLIANT AVIATION
EDUCATION COUPLED WITH EXPERT PILOT TRAINING, MATCHED, SURPASSED, AND OUTWIT
ANY AXIS AIRPLANES FLOWN AT THEM . . .
In 1935, beaming all over the place, Adolf Hitler determined Germany was to be the world’s
pace making pacesetter, especially for the manner and rate of speed war was to come. With
great pride, the Fuhrer introduced the Me109 as the most advanced fighter plane ever
designed and manufactured, and in any number afforded, at that. The 109 was a lithe 560 km/h
(360 mph), single-seating monoplane, an airplane with only one main supporting surface. Three
years later, British aerial designers and engineers not only caught up, but surpassed their
German counterparts with sturdier aircraft, i.e., the Hurricane (1937), a bit slower but much
smoother to handle, and the loved King of them all, the mighty Spitfire (1938). When chasing to
pounce and obliterate, or, if pressed himself to outmaneuver when being chased, the “Spit”
could reach almost 600 km/h (400 mph). The soon-to-be outfought Me109 fired two machine
guns and two cannon; the Spitfire boasted eight machine guns. “Eagle Day” repeatedly, and
embarrassingly, revealed the pacesetter Me109’s greatest weakness, a range of slightly less
than 400 miles. The British’s own two-for-one flexibility, spectacular rates of climb and descent,
and carefully trained pilots were nonpareil. By late 1944, the Me109 was considered obsolete,
reduced to the role of night fighter.
Three highly recommended reads for the New Year by Don DeNevi
“MESSERSCHMITT Bf 109 F, G, & K Series – AN ILLUSTRATED STUDY”, by Jochen Prien and Peter
Rodeike. Schiffer MILITARY HISTORY Publishing, Ltd.: 1995, 208 pages, many in color, 9”x 11 ½”,
hardcover; $35. Visit, www.schifferbooks.com.
“LUFTWAFFE IN THE NORTH AFRICAN CAMPAIGN, 1941-1943 – A PHOTO CHRONICLE”, by
Werner Held and Ernst Obermaier. Schiffer MILITARY HISTORY Publishing, Ltd.: 1992, 237
pages, 8 ½”x 11”, hardcover; $39. Visit, www.schifferbooks.com.

“STUKA-PILOT HANS ULRICH RUDEL – His Life Story in Words and Photographs”, by Gunther
Just. Schiffer MILITARY HISTORY Publishing, Ltd.: 1990, 292 pages, 9”x 11 ½”, hardcover;
$59.95. Visit, www.schifferbooks.com.
No publisher in the world can match, let alone surpass, Schiffer Publishing, Ltd. when it
comes to specializing in publishing German and other Axis military subjects of World War II.
Case in point is the last book listed above, the life story in words and photographs of the most
highly decorated soldier of World War II, Messerschmitt Bf 109 and Stuka pilot, Hans-Ulrich
Rudel, the famous “Eagle of the Eastern Front”. Imagine pouring over 600 high resolution
photographs on high gloss paper with a large magnifying glass candidly zeroing in on enemy
fighting men in actual air combat or relaxing in peace. Buffs, World War II enthusiasts, armchair
historians, and military strategists know precisely what this reader and reviewer is
recommending. “You want to know what it was all about it? Damn it, BE THERE! to meet the
enemy face to face, read and digest the documents and commentaries about him. Read and see
for yourself why it was the Soviet, Allied, American and British pilots all exclaimed the same
words, “What a pity Hans-Ulrich wasn’t wearing our uniform! He was probably, on either side
of this dastardly war, the best pilot known to recorded aviation history.”
Of course, by May 8 th , 1945, the day when World War II was officially over, there was nothing
left of the Luftwaffe other than the great gift Germany reluctantly gave the Allies, the
Messerschmitt Me262, the world’s first jet – capable of flying 150 miles per hour faster than
any fighters the Allies sent to intercept them, including the hallowed Spitfires. The jet engine
Me262 brought to the final months of the war a rare echo of the performance German aviation
had enjoyed 10 years before with the birth of the Me Bf109. As for Rudel, he left all of us a
fighting motto for all dangers and ordinary aspects of life, “You are only lost if you give up on
yourself . . .”