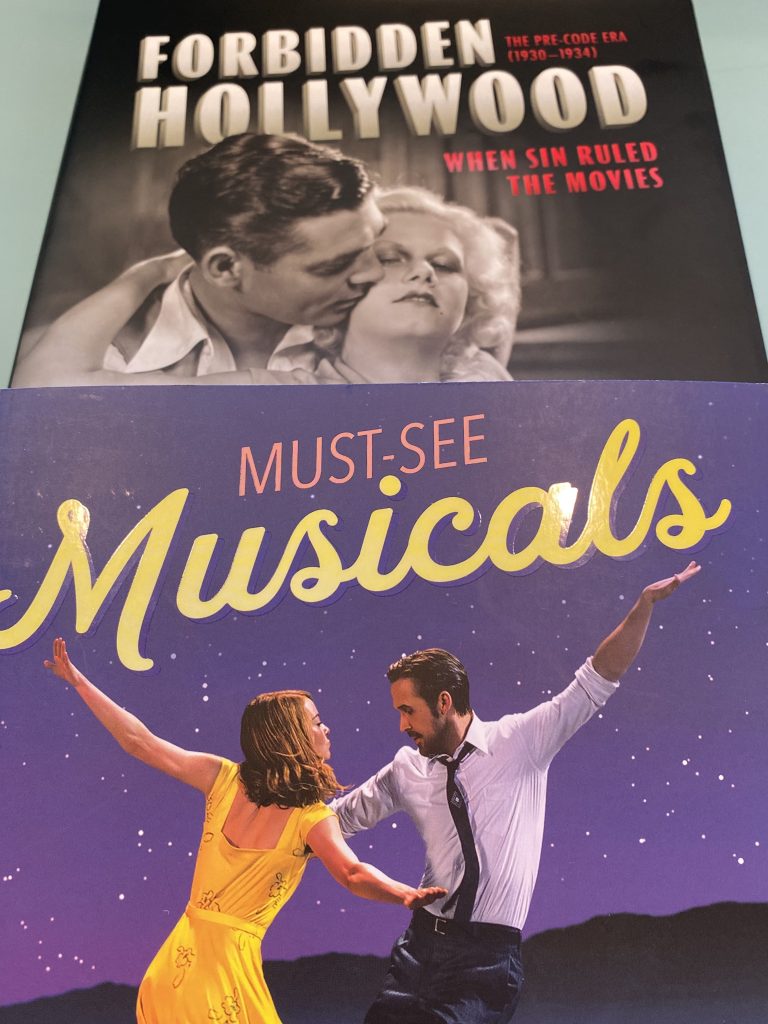 Being there . . . via two impressive coffee table books soon-to-be acknowledged literary classics
of historical cinema. Accompanied with rare, forgotten, hitherto unpublished studio and
personal photographs, they are rivals of any of the best compendia about the growth and
development of Hollywood yet published . . . .
Reviewed and Highly Recommended by Don DeNevi
FROM THE CURRENT CAST OF BOOKS APPLAUDING CINEMA CLASSICS, ADD TWO NEW ONES
“MUST SEE MUSICALS – – 50 Show-Stopping Movies We Can’t Forget”, by Richard Barrios,
Foreword by Michael Feinstein. Running Press, Hachette Book Group for Turner Classic Movies,
Inc.: 272 pages, hc, 2017; $24.99. See www.tcm.com, or www.runningpress.com
Turner Classic Movies has been the definitive resource for the greatest American movies of all
time. Reading the must-read “Must-see Musicals”, while savoring the sumptuous studio
photographs will prove the point.
Covering 50 of the best musicals yet made, highly respected musical historian Richard Barrios
has selected his favorites and filled their page-spaces with ripe-tight reporting as well as cogent,
provocative commentaries. Perfectly, he includes supposed legendary anecdotes and known
but long lost behind the scenes word and photo vignettes. From “The Broadway Melody”
(1929) to “LaLa Land” (2016), Richard, with his earnest and endearing narrative skills, invites his
readers, when appropriate, to frolic with dancing stars, laugh alongside screwball comedy
comedians, thrill throughout riveting thrillers, and sob with unabashed joy at the end of warm,
wonderful romances that wind up “. . .happily ever after”.
One of the films Richard lists, # 11 th on his list of 50, “Snow White and the Seven Dwarfs”, made
in 1937, is to most of us as much a musical as a feature length cartoon. Disney’s new-idea
musical was a sensational hit, of course, with not only the young of all ages, but also the elderly,
who, while enjoying, momentarily forgot their ages. Supposedly, it required 1,000 artists and
three years to create the masterpiece. It was the most anticipated pictures in America for over
20 years. And when it bounced and landed in theater projection booths in late 1937 and early
1938, it combined in cartoon color all the dramas that had ever come out Hollywood – –
romance, adventure, mystery, pathos, tragedy, humor, and beauty such as one must see and
feel to believe. The Selected Bibliography of “Must See Musicals” is as priceless an addition to
the brilliant masterwork as Pinocchio was to “Pinocchio” (1940).
“FORBIDDEN HOLLYWOOD – – The Pre-Code Era (1930-1934), When Sin Ruled the Movies”, by
Mark A. Vieira. Running Press, Hachette Book Group for Turner Classic Movies, Inc.: 272 pages,
hc, 2017; $24.99. See: www.tcm.com or www.runningpress.com.

Of course, the first question upon reading the book’s title, is what does “pre-Code” mean?
Especially, from today’s perspective in America’s mirage industry.
“Pre-Code”, writes author Vieira, a Hollywood photographer who specializes in the history of
the motion picture industry, “is not a film genre like the western or the musical. It is a
retrospective discovery, like ‘film noir’ or screwball comedy. Unlike these two, ‘pre-Code’ lasted
only a few years”.
Thus, Mark’s 272 pages are divided into a six-part chronology, with an Epilogue, i.e., “The
Roaring Twenties”, “1930”, “1931”, “1932”, “1933”, and “1934”. When Mae West made “She
Done Him Wrong”, she had no idea she was making a “pre-Code” feature. She thought she was
making a movie about her favorite subject. The pre-Code tag came later, when it was realized
that these films shared a time, a place, and an attitude. Mark Vieira then explains what the
terms pre-Code, Code, and “forbidden” really mean.
Serious film buffs already know that silent films were not pre-Code movies, and not every pre-
Code film was a low budget shocker. The silent, for the most part, were made with artistry,
emotional integrity, and all the elements found in love, thought, and happiness. Most of the
pre-Code films had big stars, big directors, and big budgets, which often helped them defy the
Code. Thus, one can sense how valuable Mark’s “Forbidden Hollywood” truly is, an absolute
essential text where public, private, and personal film libraries are found. Some of the better-
known film titles that today are considered “pre-Code” include, “The Divorcee”, “Little Caesar”,
“Public Enemy”, “Frankenstein”, “Scarface”, “Islands of Lost Souls”, “The Sign of the Cross”,
“She Done Him Wrong”, “Queen Christina”, and “Tarzan and His Mate”.
Reading “Forbidden Hollywood” not only leaves one with a bit more knowledge about the
greatest of all the creative arts, but also the truth about America’s most controversial cinematic
Eras..