Did you know that pigeons parachuted? That it took more than a quarter of a million cows to make a Zeppelin? Discover this and much more in IWM’s new book Weird War One.

Weird War One (ISBN: 9781904897842) by Peter Taylor (IWM) is a collection of the weird, the wonderful and the downright eccentric from deep within the First World War archives at Imperial War Museums. This book tells the often untold stories of the ‘war to end all wars’ and will leave readers with bizarre and interesting facts to share with friends and family.

Meet Douglas the ventriloquist dummy used by Arthur Langley Handen of the Royal Artillery and Jackie the Baboon who served with the 3rd South African Infantry. Amid the destructive darkness of the First World War this book celebrates the individuals who showed creativity, ingenuity, courage, camaraderie and above all humour, according to the IWM’s Press Release. 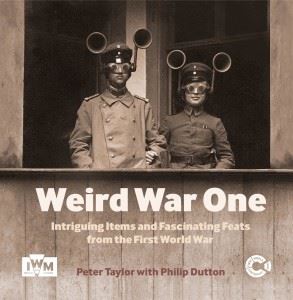 “Friendly Aliens and the British Army.” “The Women Versus the Submarine.” These strange scenarios may seem to come to us straight from science fiction, but both were in fact bold and attention-getting slogans to encourage support for British involvement in the Great War. And bizarre propaganda posters are by no means the only curious or confusing memorabilia from the war. There are also pigeon parachutes, military-grade fly swatters, and tickle sticks.

For Weird War One, Peter Taylor has scoured the archives of Britain’s Imperial War Museum, which holds one of the leading collections of materials related to World War I, to compile this fascinating encyclopedia of eccentricities. Some of the entries are amusing, like the story of a ventriloquist’s dummy that boosted men’s morale in the trenches and, later, saved its master’s life. Others inspire awe, such as the cunning creation of a fake Paris to the city’s north to foil German bombers that might fly overhead—complete with railroad tracks, soiled factory rooftops, a replica of the Gare du Nord station, and even a phony Champs-Elysées.

From this motley miscellany emerges a fun and surprisingly informative sketch of the wartime experience, making the book a perfect gift as we approach the World War I centenary.

You can buy this new and intriguing book on Amazon UK and Amazon US.