Successful video game producer/director Kris Renkewitz makes his feature film debut and will direct from his own screenplay. Principal photography is slated to begin in March 2015 in New York with further casting under way.

UNTÖT, meaning “undead” in German, is set towards the end of World War II in December 1944. During a blizzard an elite military unit headed by Lt. Fredrick Hank (Christensen) is dropped behind enemy lines in the mountains of Poland to destroy a secret Nazi weapons facility. The soldiers must face their greatest fears when they encounter something they could never have been trained for: the undead. 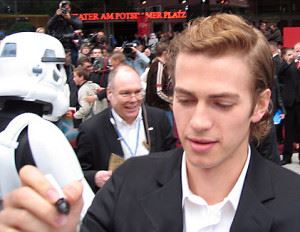 “Kris has already proven himself as a master visual artist with his successful career as a video game director. I’m thrilled to support his first foray into the medium of cinema with UNTÖT. He has written a haunting, edge-of-your-seat, action-packed script filled with supernatural elements; and I can’t wait to see his creative vision realized on screen,” said O’Connor.

“Renkewitz is a director to watch who has written a unique, high-concept horror film set in the World War II era. With Christensen attached as the lead, this will surely be a big draw for buyers at Berlin,” said Anisi.

Hayden Christensen is known to audiences worldwide for his performance as Anakin Skywalker in George Lucas’ massively popular prequel trilogy STAR WARS: Episodes 2-3. He will next be seen in AMERICAN HEIST, co-starring Adrien Brody, which premiered at the 2014 Toronto International Film Festival and will be released later this year. He is currently filming 90 MINUTES IN HEAVEN opposite Kate Bosworth. His other credits include LIFE AS A HOUSE, which garnered him a Golden Globe nomination, JUMPER, FACTORY GIRL, and SHATTERED GLASS.

Writer/director Kris Renkewitz is an established artist, director, and producer in the comic book and video game world. His credits include working on Marvel Comics’ popular The West Coast Avengers, Iron Man/War Machine, and Daredevil as well as for DC Comics’ The Flash, The Justice League, and Superboy. His experience in the video game industry includes directing for Tomb Raider, Ghostbusters, and 007: Tomorrow Never Dies. He owns and operates an animation and VFX production studio, Renketwitz Studios, whose past projects include Halo, League of Legends, Prince of Persia, Mad Max, and Resident Evil.

Solaris Entertainment’s Greg O’Connor produced the Oscar nominated film WARRIOR, starring Tom Hardy, Joel Edgerton, and Nick Nolte, which was released by Lionsgate. His other credits include PRIDE AND GLORY with Edward Norton and Colin Farrell, MIRACLE featuring Kurt Russell and Patricia Clarkson, and THE SLAUGHTER RULE with Ryan Gosling and Amy Adams.