You’ve probably seen one of the most famous photographs taken in Normandy, 1944, already that show the young Waffen-SS soldier Otto Funk with a ‘Thousand Yard Stare’. Funk was only 18 years old at that time, had been fighting continuously for days; almost no sleep and Allied planes were interfering with every German move which caused many soldiers to worry.

Here are some interesting Then & Now photographs that show Otto Funk and his comrades like Klaus Schuh in Normandy, 1944.

Otto Funk fought with the 15. (Aufklärungs ) Kompanie/ SS-Panzergrenadier-Regiment 25 der 12. SS-Panzer-Division “Hitlerjugend”, which consisted mainly out of 16-18-year-old boys. Although it was merely ‘youngsters’, the division would become infamous for their viciousness. Otto Funk kept on fighting until the end of the war when he was captured by the U.S. Forces. He was born on June 6, 1926, and would pass away on September 11, 2011.

SS-Sturmmann Otto Funk of the 15. (Aufklärungs ) Kompanie/ SS-Panzergrenadier-Regiment 25, photographed after an assault, near Rots. They were to follow up on the attack at Norrey-en-Bessin on June 9, 1944. Also seen in the middle is SS-Grenadier Klaus Schuh, who would be killed on June 26, 1944. 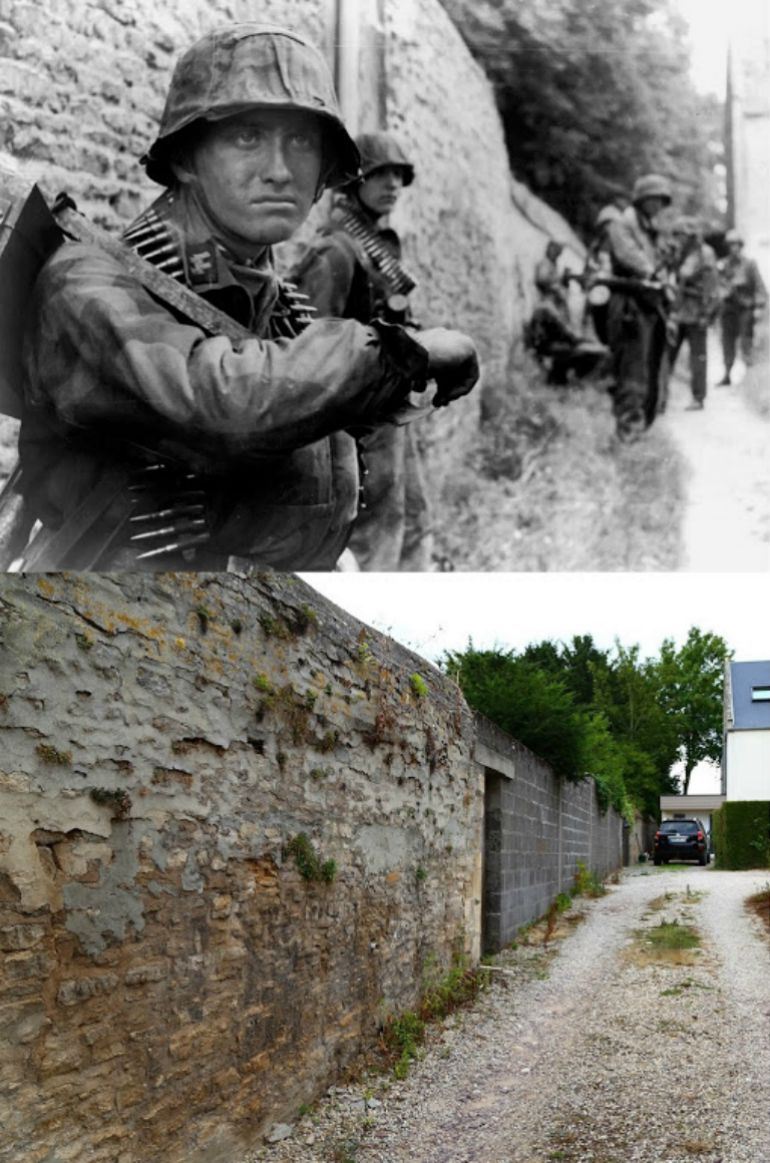 SS-Obergrenadier Günther Hamel and SS-Unterscharführer Paul Koslowski, both belonging to SS-Panzergrenadier Regiment 25 of the 12. SS-Panzerdivision ‘Hitlerjugend’, in Rots, northwest of Caen, Normandy. June 9, 1944, after fierce fighting in Norrey-en-Bessin. 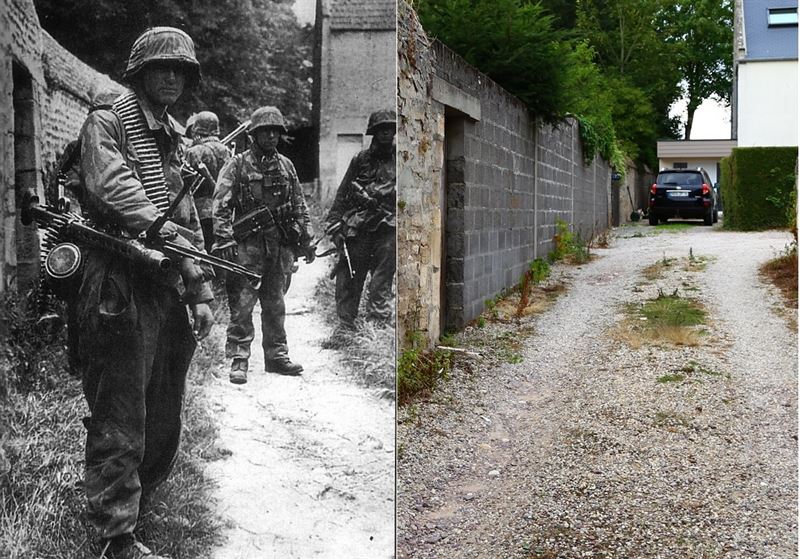 Soldiers of the SS-Panzergrenadier-Regiment 25 resting in a small street in Rots, Normandy. 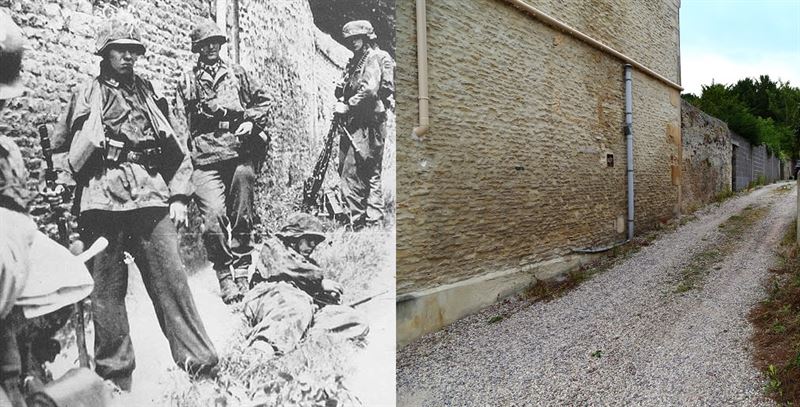 Although both wounded, SS-Hauptsturmführer Rudolf von Ribbentrop (sidecar) and SS-Obersturmbannführer Max Wünsche (driving), Regimentskommandeur of SS-Panzer-Regiment 12, are photographed after paying a visit to survivors the 3rd Platoon (III. Zug) of the 15. Kompanie. 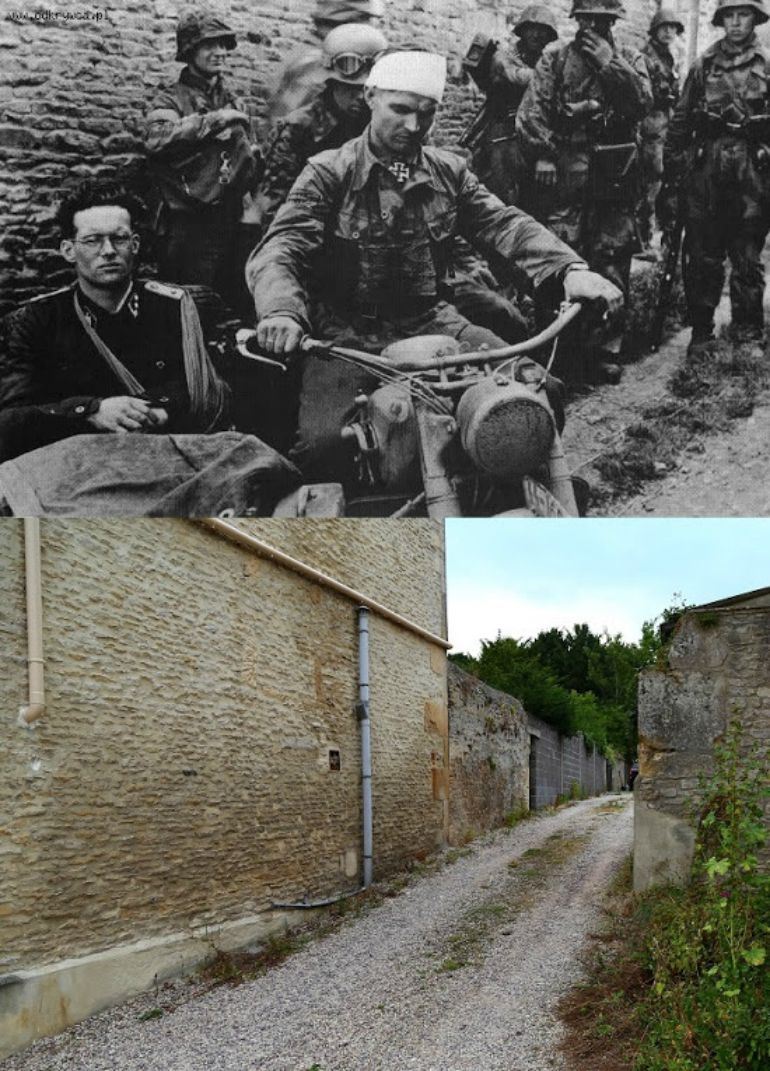 Panther of 3. Kompanie/ SS-Panzer-Regiment 12, after a failed attack on Norrey-en-Bessin. “The third tank of the troops was intact, but its commander, Friedrich Eismann had stuck the upper part of his body out of the turret of his ‘326’. That escapade did not last for long and he was cut in two by a shell, emptying his blood onto his gun-layer, Gerd Krieger, a lad known for his very blond hair. The lower part of the tank commander’s body fell onto Krieger who was terrified.” (The Panzer and the Battle of Normandy by George Bernage)

Gert Krieger, cleaning the blood of his commander, SS-Unterscharführer Eismann, who had been sliced in two by a shell, from the interior of the turret. 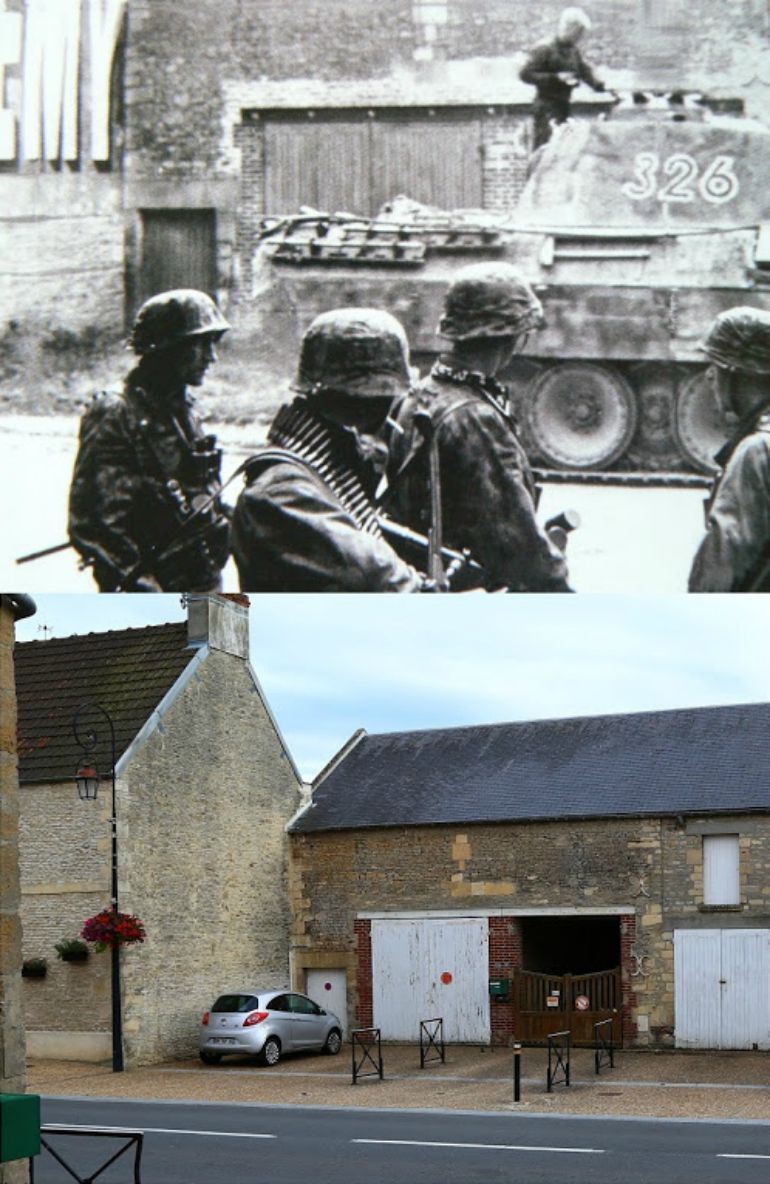 The last two slides were enlarged due to their small size and lost quality. Photographic credits: ‘Profoka Wolf’ (wanting to remain under this nickname) who took the ‘Now’ photographs in Rots and German ‘Bundesarchiv’ for all the ‘Then’ photographs.

Related articles: Take a look at these Then & Now Photographs from the Omaha Beach Area, Normandy, or these 12 amazing aerial photographs of D-Day.

8 thoughts on “Otto Funk and his unit in Normandy: Now & Then”