Operation Infatuate was the codename given to an Anglo-Canadian operation during the Second World War to open the port of Antwerp to shipping and relieve logistical constraints.

The operation was part of the wider Battle of the Scheldt and involved two assault landings from the sea by the 4th Special Service Brigade and the 52nd (Lowland) Division. At the same time the 2nd Canadian Infantry Division would force a crossing of the Walcheren causeway.

On 1 November 1944 the Operation started with the Walcheren landings. No. 4 Commando landed at 05:45 hours just east of the Oranjemolen, a windmill on the sea dyke at Flushing, with the main part of the troops arriving ashore at 06:30 hours.

SEE ALSO: Friedrich Lengfeld: I died for the Enemy during Battle of Hürtgen Forest

The Operation ended on November 8, 1944 after four German officers approached the Allied troops to ask for a surrender for the remaining German troops. An estimated 40,000 German troops surrendered. 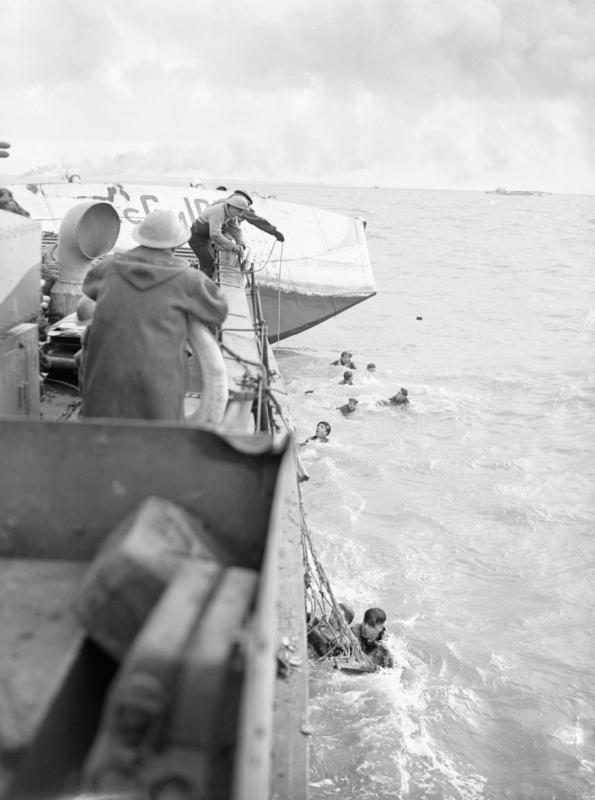 Walcheren Landings: British Marine Commandos Land on Walcheren at Westkapelle. 1 November 1944, on Board An Lci (s). the Final Phase of the Battle To Free the Approaches To the Belgian Port of Antwerp Began When Royal Marine Commandos Landed at Dawn at Westkapelle, the Western Most Point of the Island of Walcheren. LCG survivors being picked up by an LCI(S) acting as a hospital ship. Smoke of battle ashore is in the background. 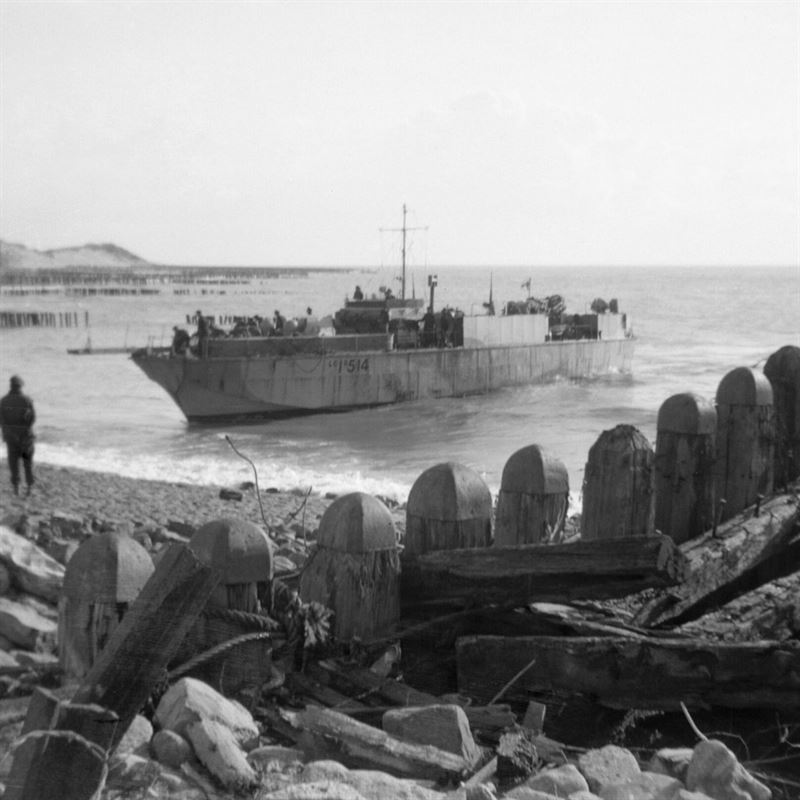 Walcheren Landings: An infantry landing craft (LCI) approaching the shore to take off wounded from Walcheren, Holland, November 1944. The occupation of Walcheren Island is going fast. Flushing is in the hands of the British and troops fanning out to the West are close to the Marine Commandos coming down from the Westkapelle beachhead (where these pictures were taken). This image shows a ship coming ashore at Walcheren to take off the wounded. 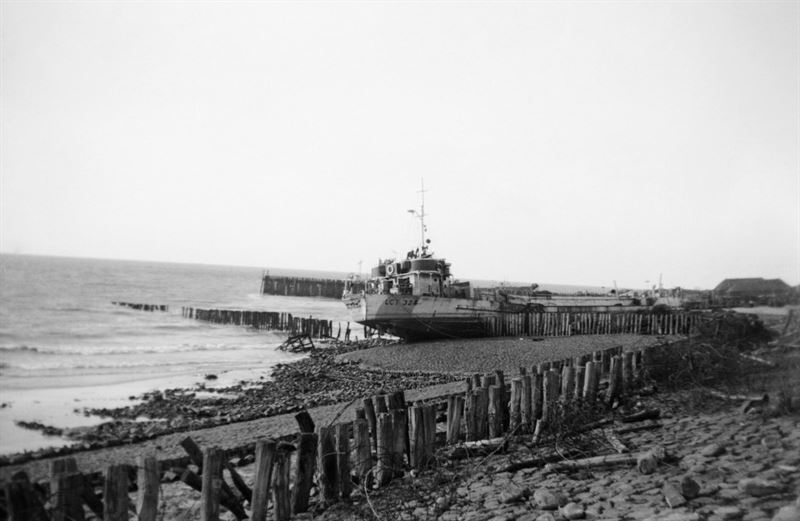 The image shows a wrecked landing craft on the beach of Walcheren. 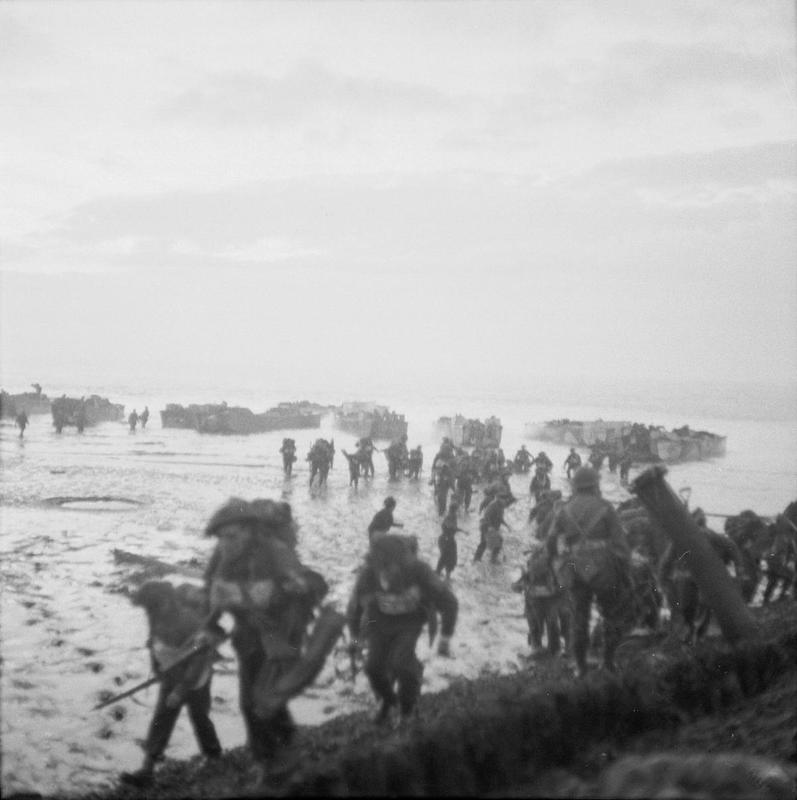 The Battle for Walcheren Island: Men of the 4th Special Service Brigade wade ashore from landing craft near Flushing to complete the occupation of Walcheren. 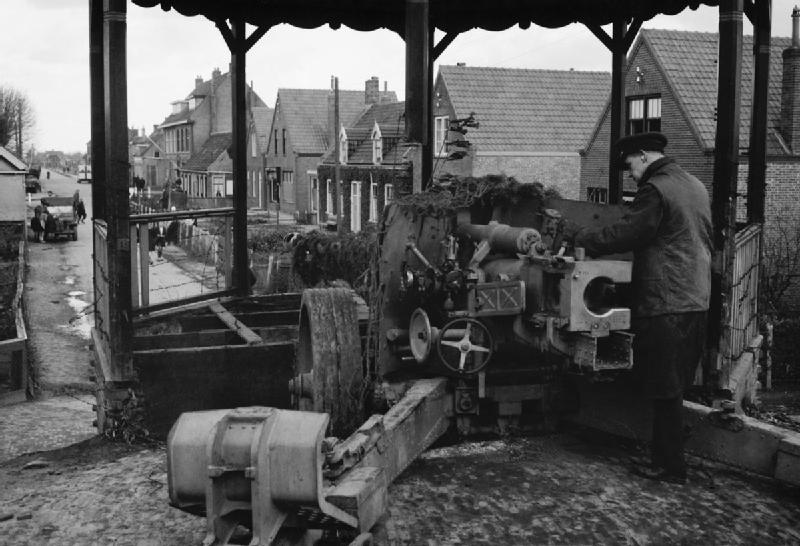 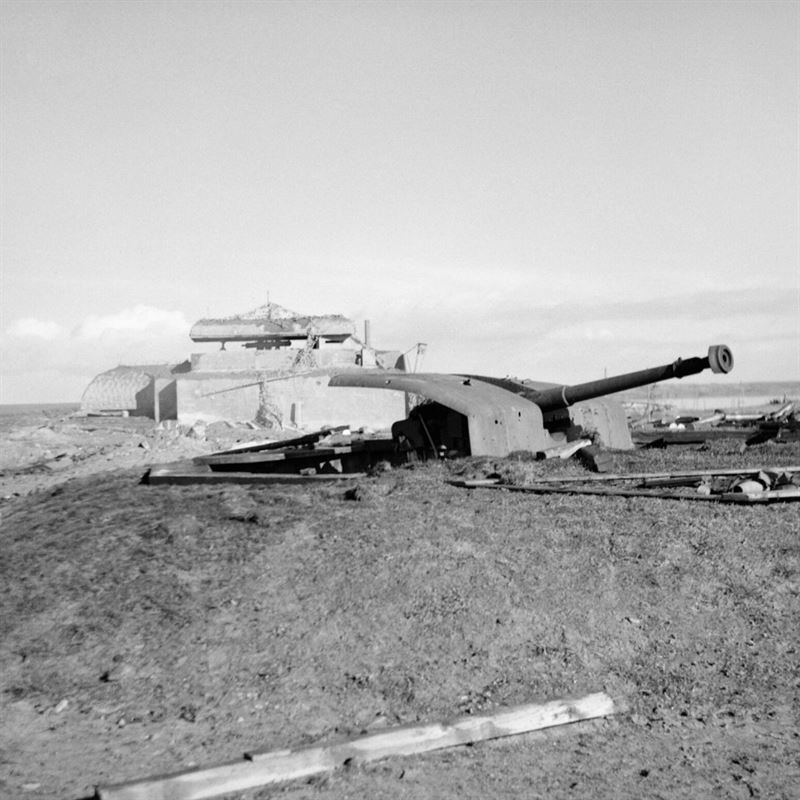 The occupation of Walcheren Island is going fast. Flushing is in the hands of the British and troops fanning out to the West are close to the Marine Commandos coming down from the Westkapelle beachhead (where these pictures were taken). This image shows German coastal guns and blockhouses which the British forces quickly put out of action on Walcheren Island. 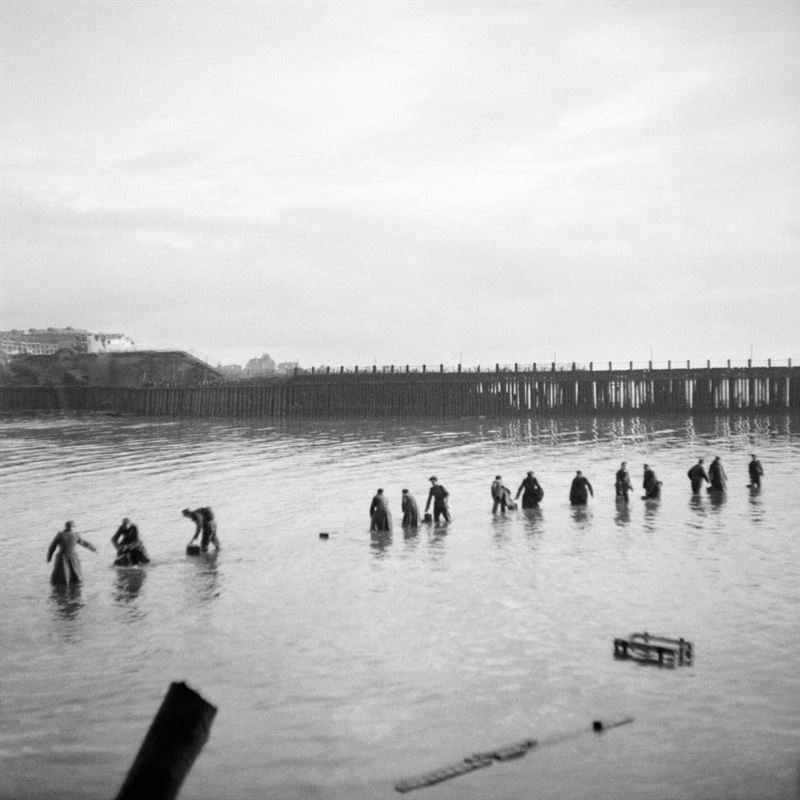 Stores are being landed near Flushing after the landing. 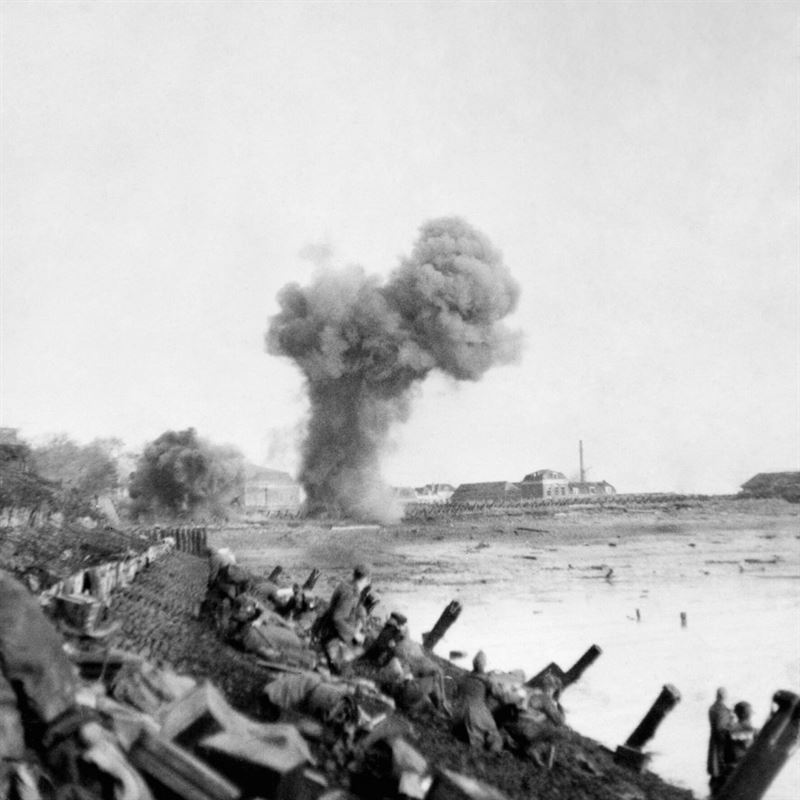 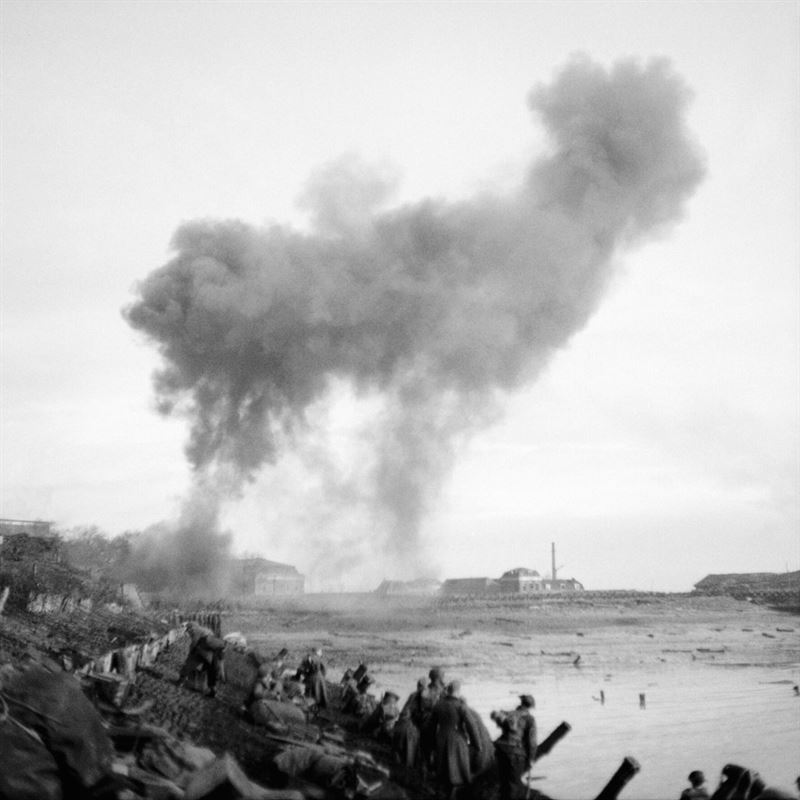 The images show troops advancing along the waterfront near Flushing with shells bursting ahead. 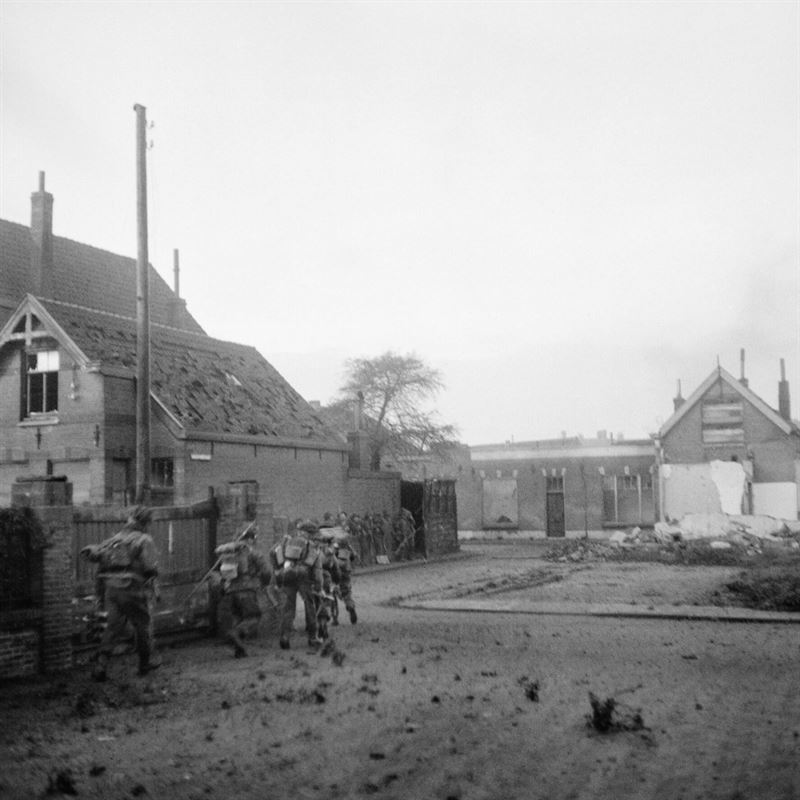 British assault troops landed on Walcheren at dawn on 1 November 1944 and most of Flushing was included in the first bridgehead. The landings were supported by fire from British warships. The object of the assault is to silence the enemy guns menacing the Scheldt passage to the port of Antwerp. 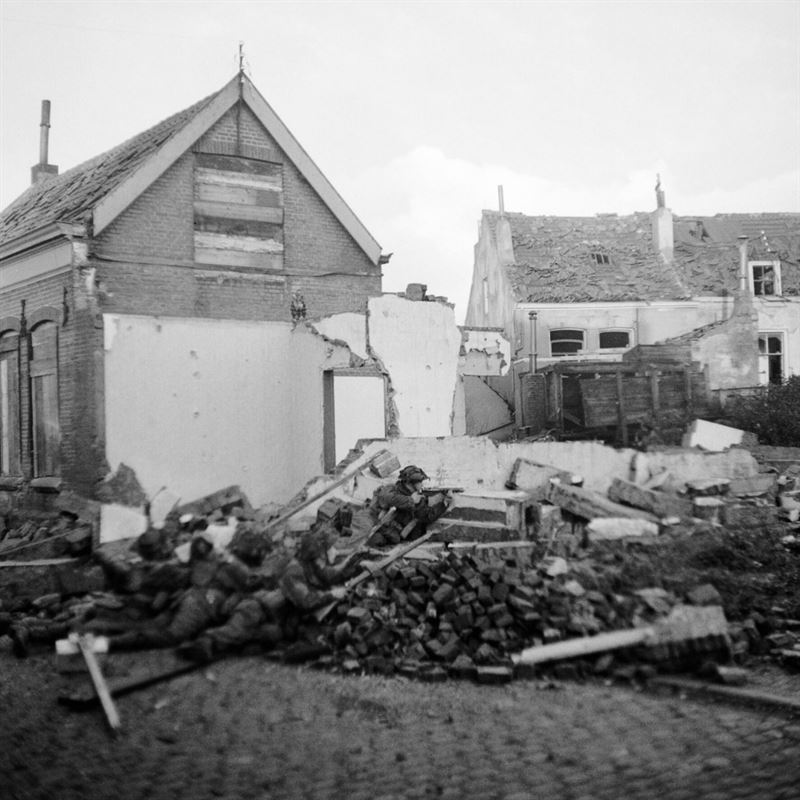 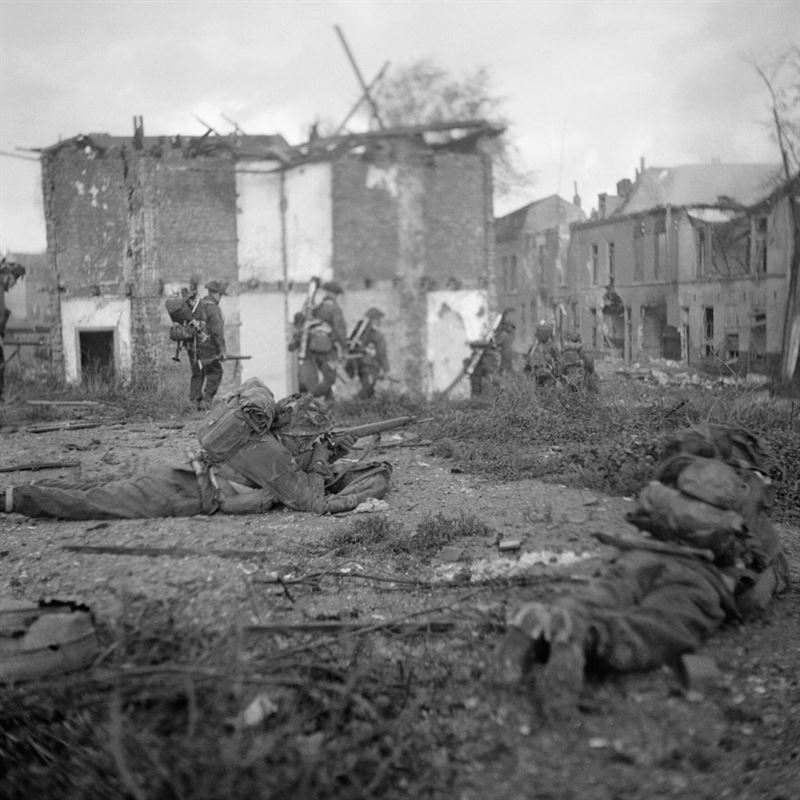 These images show the British assault troops advancing through the streets at Flushing where there was sharp fighting. 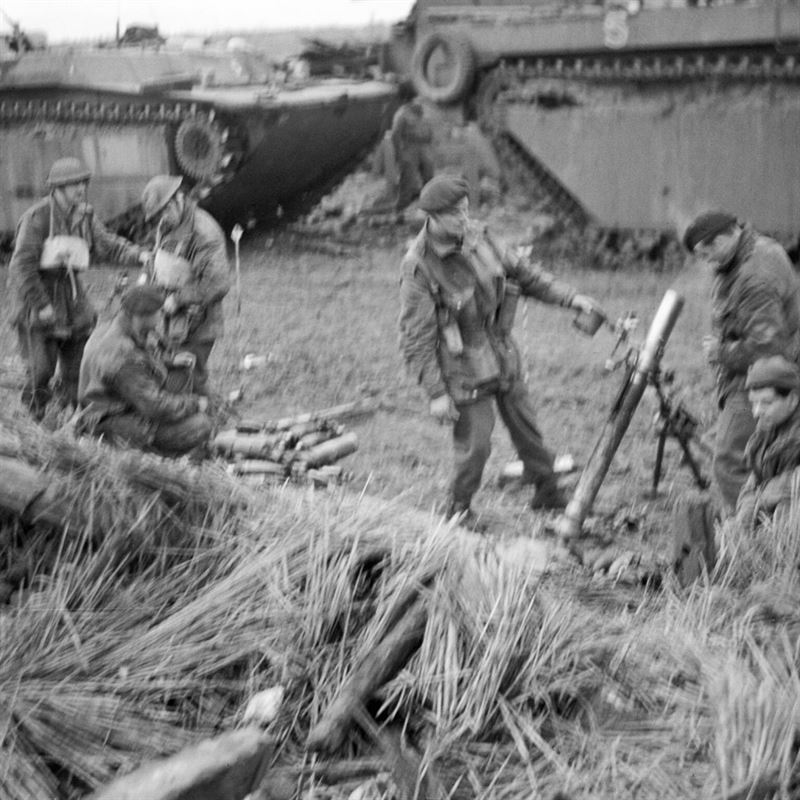 3″ mortars in action from behind the cover of amphibious tanks. 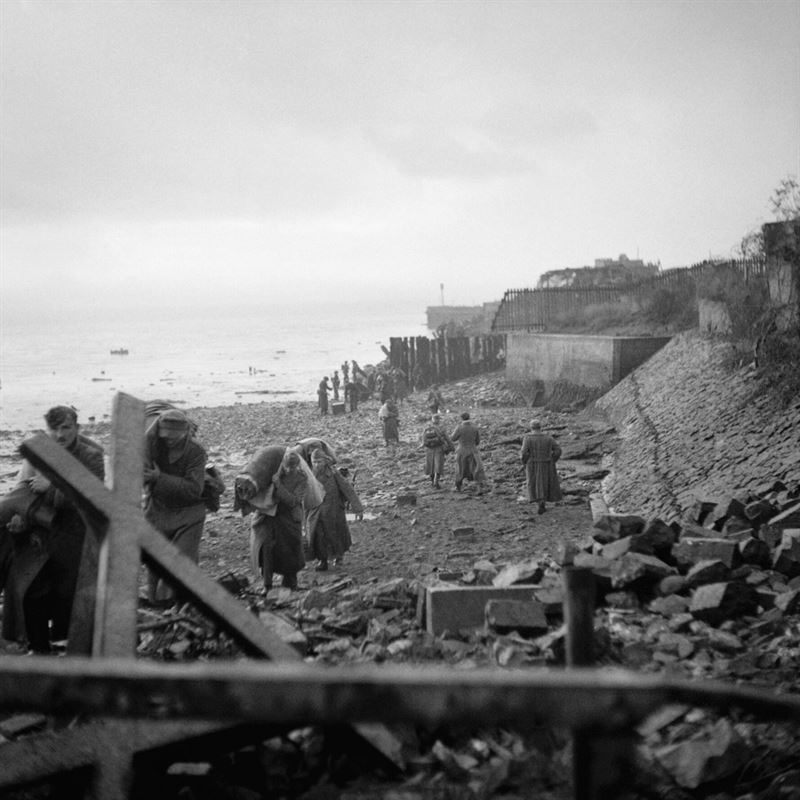 This scene on the Walcheren coast after the British landing has been effected. 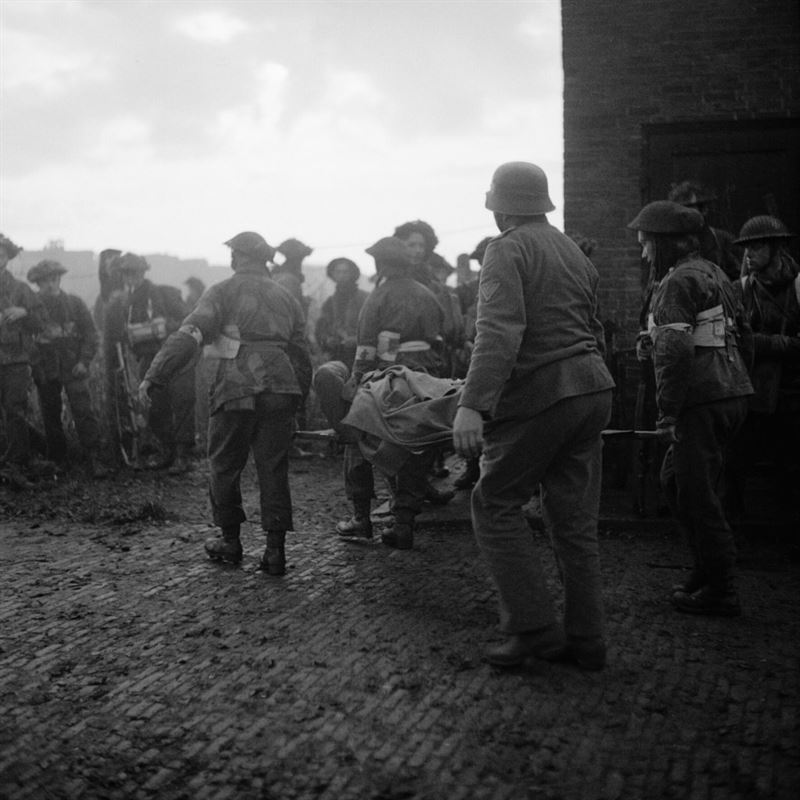 This image shows the wounded being attended to by a British medical officer. 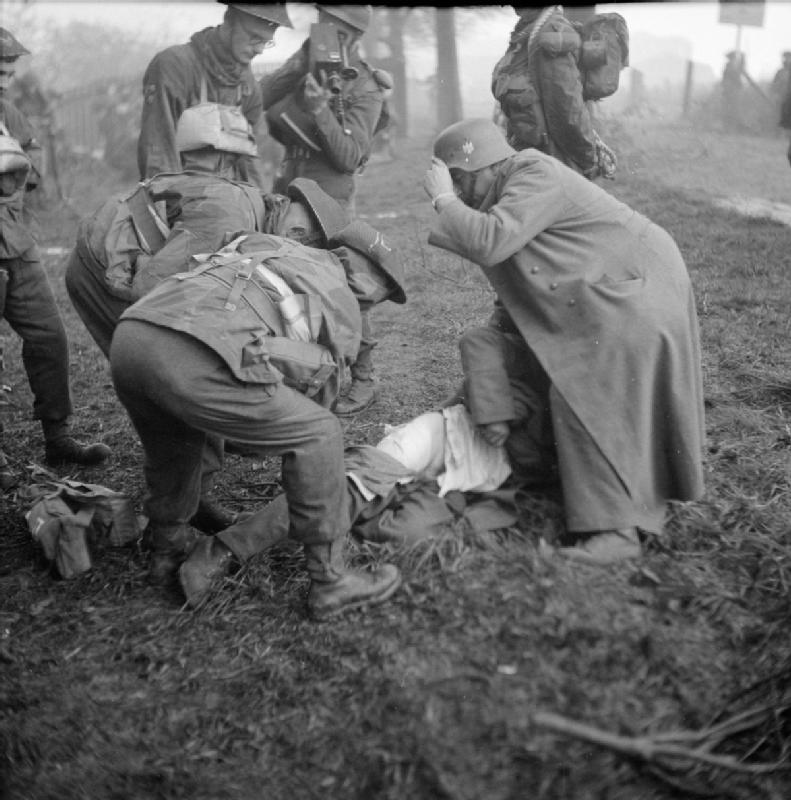 A British medical officer and German POW attend to a casualty during the landings on Walcheren, 1 November 1944. Note the AFPU cameraman filming the incident. 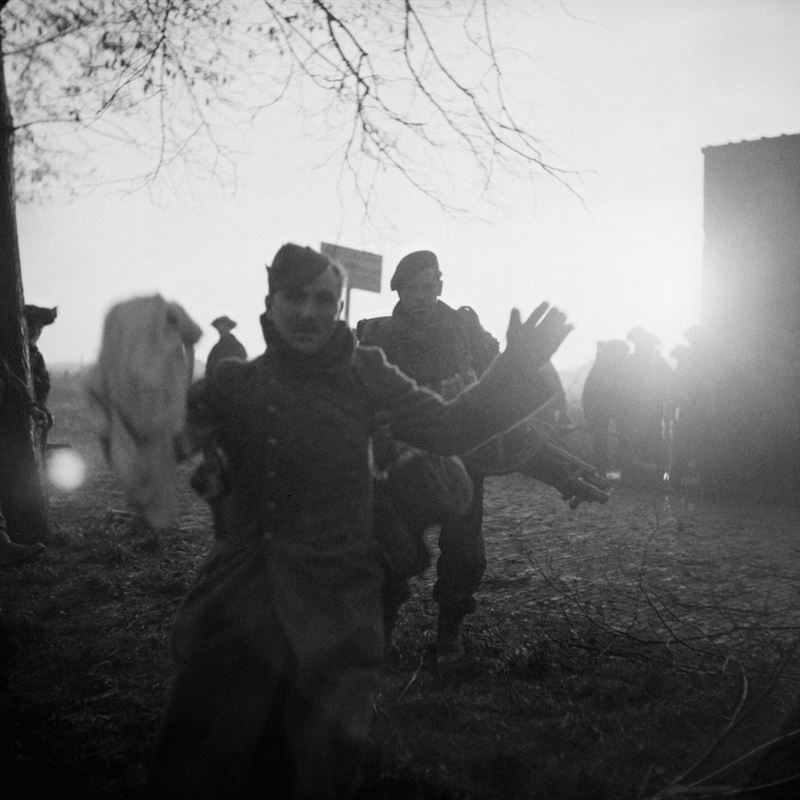 A German POW captured during the Allied assault on Walcheren Island in Holland, November 1944. 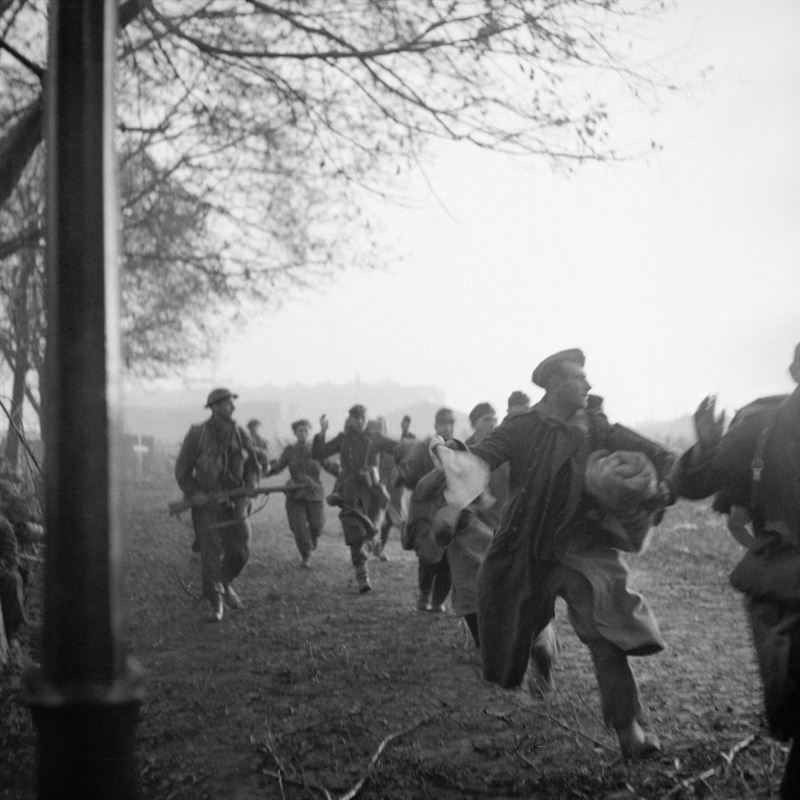 Image shows some of the first prisoners captured after the landing. 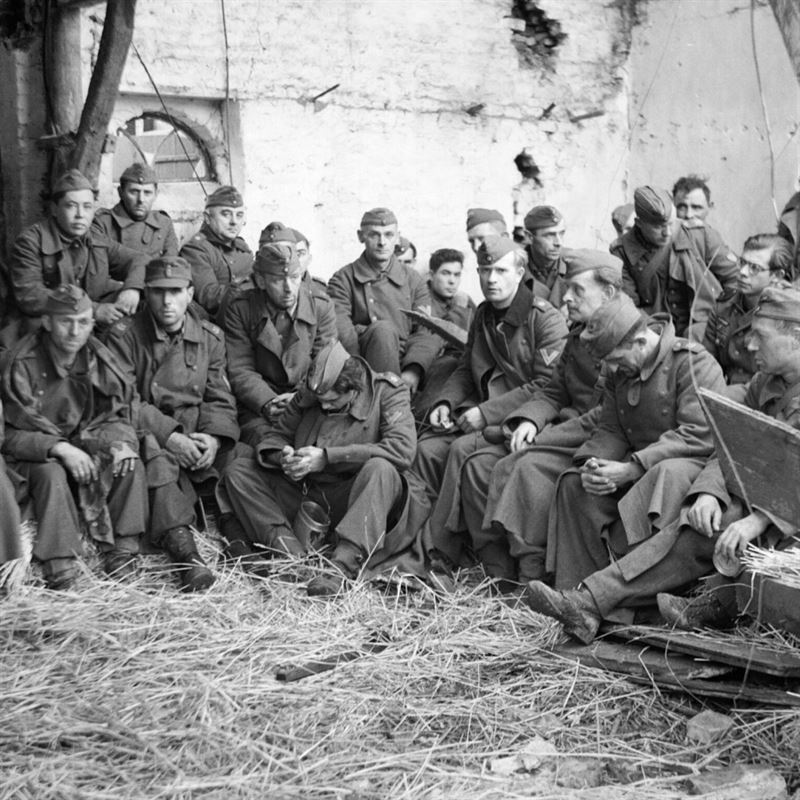 German prisoners that were taken in the fighting being housed in a barn on the way to the Prisoner of War cages. Note that most Prisoners are from the Marine-Artillerie (see shoulder boards). 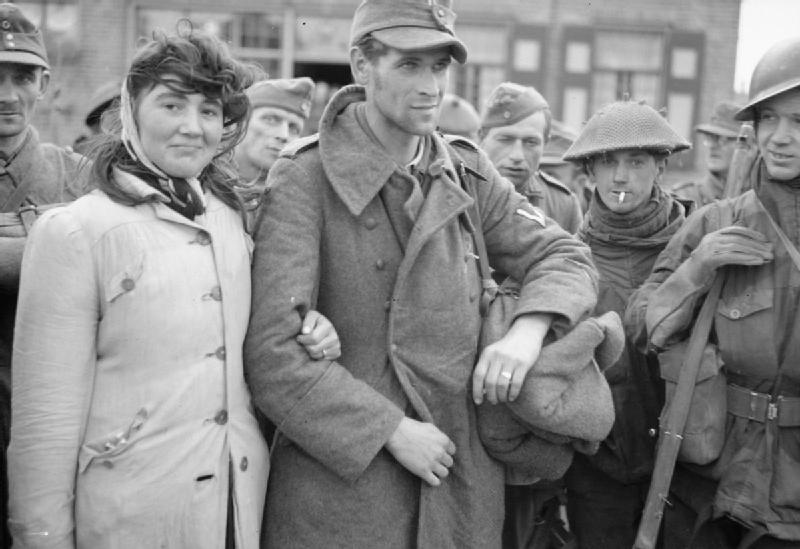 Among the prisoners taken on Walcheren was this Dutch woman. She is seen here in this R.A.F photograph with her husband, a German solder, whom she refused to leave. She marched with the German prisoners to the Prisoner of War cages.