This Sunday, May 5 (1821), marks the anniversary of Napoleon’s death, to coincide with this anniversary Pen and Sword Books will be giving away four eBooks for free from Amazon. Here are the four eBooks that will be free on sunday only:

Waterloo: The Campaign of 1815: Volume I: From Elba to Ligny and Quatre Bras by John Hussey 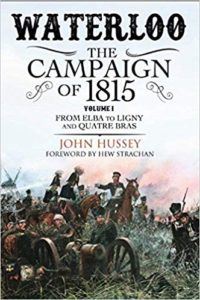 The first of two groundbreaking volumes on the Waterloo campaign, this book is based upon a detailed analysis of sources old and new in four languages. It highlights the political stresses between the Allies, and their resolution; it studies the problems of feeding and paying for 250,000 Allied forces assembling in Belgium during the ‘undeclared war’, and how a strategy was thrashed out.

It studies the neglected topic of how the slow and discordant Allies beyond the Rhine hampered the plans of Blücher and Wellington, thus allowing Napoleon to snatch the initiative from them. Napoleon’s operational plan is analyzed (and Soult’s mistakes in executing it). Accounts from both sides help provide a vivid impression of the fighting on the first day, 15 June, and the volume ends with the joint battles of Ligny and Quatre Bras the next day. 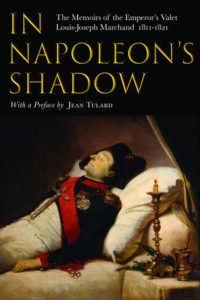 ‘In 1811, twelve young men were chosen among the families in the Emperor’s personal service to serve as ushers in his apartments. My mother, attached to the household of the King of Rome as first nurse to the prince, requested this favour for me from the grand chamberlain, the Count de Montesquiou, and it was granted.’

Louis-Joseph Marchand’s intimate memoir of his time as Napoleon’s valet is the last of the significant Napoleonic manuscripts to be translated into English and a unique and precious insight into the last days of Napoleon’s Imperial project.

Serving alongside the Emperor from the apex of his reign and through his eventual demise, Marchand depicts, in remarkable detail, the Russian campaign, the campaigns of Germany and France, Napoleon’s exile to Elba and subsequent escape, his defeat at Waterloo.

Friend and confidante to the leader, Marchand was beside him at the Tuileries during the Hundred Days, and he was present to hear Napoleon’s last words, ‘France… my son… the army…’ on the island of St Helena.

This sincere and authentic testimony from a man with ‘nothing to hide, nothing to apologise for’ is both a meticulous historical record and a fresh personal perspective on Napoleon

‘In this work’, Tulard remarks in his preface, ‘the Emperor speaks freely. Listen…..Marchand presents the somewhat familiar history of the Emperor’s decline as completely new territory through conversations, fond stories and personal encounters’.

‘Marchand’s memoirs, republished in English for the first time in two decades, represent a truly irreplaceable contribution to Napoleonic scholarship. Beyond the Emperor as commander and conqueror, Marchand, from his privileged vantage point, illuminates Napoleon the man in rich and absorbing detail.’ – John H Gill

Letters from the Battle of Waterloo: Unpublished Correspondence by Allied Officers from the Siborne Papers by Gary Glover 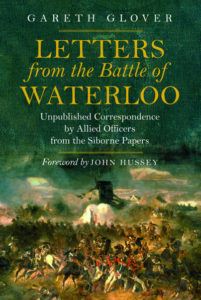 Waterloo is probably the most famous battle in military history. Thousands of books have been written on the subject but mysteries remain and controversy abounds.

By presenting more than 200 previously unpublished accounts by Allied officers who fought at the battle, this collection goes right back to the primary source material. In the letters the Allied officers recount where they were and what they saw. Gareth Glover has provided historical background information but lets the officers speak for themselves as they reveal exactly what happened in June 1815.

Originally sent to, and at the request of, Captain W Siborne, then in the process of building his famous model of the battle, these letters have remained unread in the Siborne papers in the British Library. A small selection was published in Waterloo Letters in 1891 but much of vast historical significance did not see the light then and has remained inaccessible until now. Glover now presents this remarkable collection which includes letters here by Major Baring, George Bowles, Edward Whinyates, John Gurwood and Edward Cotton as well as letters by Hanoverian and King’s German Legion officers.

This is a veritable treasure trove of material on the battle and one which will mean that every historian’s view of the battle will need correcting.

With Eagles to Glory: Napoleon and his German Allies in the 1809 Campaign by John H. Gill

(Kindle Edition will be uploaded to Amazon in a few days – check back): 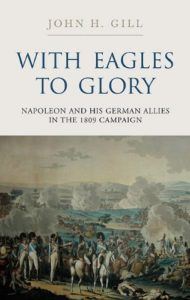 When Napoleon’s Grand Armee went to war against the might of the Habsburg empire in 1809, its forces included more than 100,000 allied German troops. From his earliest imperial campaigns, these troops provided played a key role as Napoleon swept from victory to victory and in 1809 their fighting abilities were crucial to the campaign. With Napoleon’s French troops depleted and debilitated after the long struggle in the Spanish War, the German troops for the first time played a major combat role in the centre of the battle line.Aiming at a union of German states under French protection to replace the decrepit Holy Roman Empire, Napoleon sought to expand French influence in central Germany at the expense of the Austrian and Prussian monarchies, ensuring Frances own security. The campaign Napoleon waged in 1809 was his career watershed. He suffered his first reverse at Aspern. Victory was achieved at Wagram was not the knock-out blow he had envisaged.In this epic work, John Gill presents an unprecedented and comprehensive study of this year of glory for the German soldiers fighting for Napoleon, When combat opened they were in the thick of the action, fighting within French divisions and often without any French support at all. They demonstrated tremendous skill, courage and loyalty.