Old Blood and Guts George Patton, the American general who was most feared by his German counterparts, was a magnet for controversy throughout his career. While his military skill and audacity were respected by his superiors, his technique for dealing with what would today be recognized as Post Traumatic Stress Disorder earned swift condemnation from General Dwight D. Eisenhower. 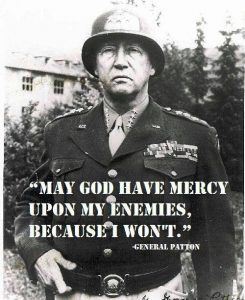 It was midway through the war in 1943 when General Patton, commander of the Seventh U.S. Army, visited a military hospital in Sicily, showing his concern for the wounded. Then he came to the bed of eighteen-year old Private Charles Kuhl, who seemed to exhibit no indications of injury. Patton asked Kuhl why he was in the hospital. “It’s my nerves,” Kuhl replied. “I can hear the shells come over but I can’t hear them burst.” Patton called the private a coward, slapped him across the face, and left. When Patton heard Kuhl respond with tears, he went back to the hospital bed, slapped the soldier again and told him to leave the hospital. The scene, which was vividly depicted in the film Patton, became a defining moment in the general’s career.

Kuhl was also suffering from a high fever and malaria at the time, but whether that information would have evoked a different response is doubtful. Another hospital visit a week later resulted in the same reaction: Private Paul G. Bennett, who had also been hospitalized for what was described as nerves, received a slap from General Patton.

When he learned of the episodes, General Eisenhower send a letter to Patton, ordering him to apologize to the soldiers. Eisenhower wrote, “I am well aware of the necessity for hardness and toughness on the battle field. … But this does not excuse brutality, abuse of the ‘sick,’ nor exhibition of uncontrollable temper in front of subordinates.”

Later in the year, when the media learned of what had happened, there was an outcry as Patton’s legitimacy to command was challenged. Members of Congress joined the chorus of those who wanted Patton to pay for his action. There were accusations that Eisenhower, who had permitted his volatile but brilliant general to retain command, had tried to cover up the incident. With so much attention now focused on Patton, Eisenhower had no choice but to relieve him of command of the Seventh Army. However, when Patton was put in command of the Third Army, the result was victory in the Battle of the Bulge. Fast forward from the twentieth century Patton and World War II to the twenty-first century and the wars in Iraq and Afghanistan and another Patton.

Except for his family heritage, he has no personal connection to war, but that doesn’t mean that he isn’t involved in the military. Patton, a filmmaker whose background is in developmental psychology, began working on a program to help veterans dealing with PTSD. Recognizing the power that film has for younger veterans, Patton has helped develop workshops that guide soldiers in narrative storytelling.  The veterans learn how to make a film that explores their personal battles with PTSD.

The filmmaking Patton’s involvement in the PTSD project has not diminished his regard for his grandfather.  In fact, he feels that the slapping incident overshadowed General Patton’s deep concern for his troops. “Trademark discipline and the ever-greater demands on his combat troops always went hand in hand with making sure they were properly outfitted, and had at least one hot meal a day whenever feasible.”

As Benjamin Patton is a filmmaker, it’s perhaps no surprise that he appreciates the movie Patton, which was released when he was five years old.  Even home movies of the audacious military leader evoked family admiration. Patton recalled his father responding to one home movie which showed Patton in the 1930s by saying, “He was something else. That guy was something else.”

He was indeed. The trait that George Patton IV called “visible personality” which was the means by which they inspired their soldiers to fight harder so that victory would be achieved with fewer casualties translates into the use of film as a means to help soldiers with invisible wounds heal. The Patton legacy is a multi-faceted one which has benefited the American military tradition in ways as complicated as Old Blood and Guts himself.