Although the tragedy at Arnhem and the failure of Operation Market Garden have been covered extensively here on Argunners.com and other websites it still remains a hot topic that draws interest from a wide audience. It would appear we have more to learn and understand from our tragedies than our successes. Makes sense to me. This book extends that courtesy to some of the heroes of that battle who had smaller roles in the fighting, but their stories are still immense and not lost on the audience of World War Two enthusiasts. 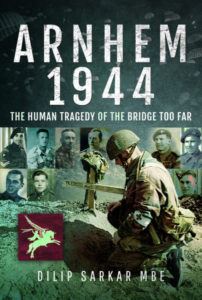 Dilip Sarkar (MBE) the author of this book provides us great stories and details about drivers, privates, recon squad members, Glider pilots, anti-tank gunners, and Sappers. These stories, deaths, accounts of battle are just as important as the Generals and Allied leader stories and tales of the battle. Dilip does a great job of detailing the deaths, burials, re-burials and local populace that were associated with some of the smaller battles and skirmishes. I think it is a fantastic approach to telling the smaller stories that did not necessarily make the front page. He also covers the impact of the families of the fallen and the growth of their kinship with the locals who adopted the cemeteries and graves of these brave men.

As one of the main reviewers for Argunners.com website I have fielded comments on Arnhem that speak to the frustration that readers have experienced over the years wherein they didn’t feel like enough of the actual story was being told. As an interested reader and historian, I empathize with those sentiments and can honestly say that this book does a great job of getting closer to the truth about how the families felt about the battle and especially how they have dealt with the tragedy since it happened. A lot of the families of the fallen involved have made pilgrimages to Arnhem and the surrounding areas. Curious and wanted to get a better understanding of what was the big deal? Why was Arnhem so important on Invasion day but seem to be pushed to the back afterwards? This book goes a long way towards answering those questions for the families of those fallen. Does it do enough? I can’t answer that from a strong position, but I can comment that I truly enjoyed Dilip’s detailed research and will look for more of his books in the future.

About the author. A prolific author, DILIP SARKAR has been obsessed with the Second World War for a lifetime. An MBE for ‘services to aviation history’, and Fellow of the Royal Historical Society, unsurprisingly, for a retired police detective with a First in Modern History, his work has always been evidence-based – often challenging long-accepted myths. Firmly focused on the ‘human’ experience of war, his many previous works include the authorized biographies of Group Captain Sir Douglas Bader and Air Vice-Marshal ‘Johnnie’ Johnson, the best-selling Spitfire Manual and The Few. Dilip has presented at such prestigious venues as Oxford University, the Imperial War and RAF Museums, and National Memorial Arboretum; he works on TV documentaries, both on and off screen.