An epic World War II story of valor, sacrifice, and the Rangers who led the way to victory in Europe. It is said that the right man in the right place at the right time can make the difference between victory and defeat. This is the dramatic story of sixty-eight soldiers of the U.S. Army’s 2nd Ranger Battalion, D Company—Dog Company—who made that difference, time and again.

From D-Day, when German guns atop Pointe du Hoc threatened the Allied landings and the men of Dog Company scaled the ninety-foot cliffs to destroy them; to the thickly forested slopes of Hill 400, in Germany’s Hürtgen Forest, where the Rangers launched a desperate bayonet charge across an open field, captured the crucial hill, and held it against all odds. In each battle, the men of Dog Company made the difference.

Dog Company is their unforgettable story—thoroughly researched and vividly told by acclaimed combat historian Patrick K. O’Donnell—a story of extraordinary bravery, courage, and determination. America had many heroes in World War II, but few can say that, but for them, the course of the war may have been very different. The right men, in the right place, at the right time—Dog Company. 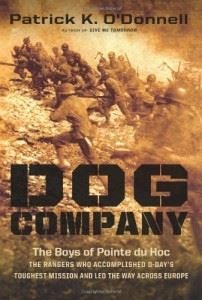 REVIEW: On June 6, 1984, as part of the 40th anniversary celebration of D-Day, a reenactment of the scaling of the ninety-foot cliff of the strategic Pointe du Hoc at Omaha Beach was performed. Included with the dozen Green Berets scheduled for the climb was 63-year-old Herman Stein, who forty years earlier and under far less pacific circumstances as a member of Dog Company, 2nd Ranger Battalion, clambered up that precipice. Not only did Stein scale the cliff that day, he resoundingly beat the much younger Green Berets to the top. Even when in their sixties Rangers lead the way. That scene forms part of the prologue of Dog Company: The Boys of Pointe du Hoc by combat historian and bestselling author Patrick K. O’Donnell, a stirring account of 68 soldiers, members of Dog Company, 2nd Ranger Battalion, who, when the moment came, proved themselves worthy.

It took sixteen years for O’Donnell to write this book. He conducted hundreds of eyewitness interviews of individuals involved on both sides of battle, obtained official accounts of the battles, and visited the battlefields. By interweaving the participants’ unsparing and sometimes intense recollections with official records and his own observations, O’Donnell succeeded in writing a vivid narrative of rare power. Personal details, so important in an account like this, add an intimacy to the triumphs and trauma of life in the service and survival on the battlefield, and O’Donnell’s narrative is rich with them.

Dog Company had a pivotal role in one of World War II’s most important battles, Operation Overlord, and in one of its deadliest, Hürtgen Forest, a battle Maj. Gen. James Gavin, whose 82nd Airborne Division fought there, noted “was one of the most costly, most unproductive, and most ill-advised battles” ever fought by the U.S. Army.

Like other young men entering the service during the war, the men in Dog Company came from a wide variety of backgrounds. In Dog Company’s case, some of them proved to be real characters with larger-than-life personalities. The roll included Antonio J. Ruggiero, a five-foot-three-inch professional tap dancer who became the unit’s deadliest sniper, Capt. Harold K. “The Duke” Slater, a company commander who had the on-screen presence and looks of actor Lee Marvin, Larry Johnson, who became notorious for elaborate and inspired practical jokes (especially when it came to explosives), and men like William “L-Rod” Petty, initially rejected by the Rangers because he wore a partial dental plate, who was accepted when he protested, “Hell, sir, I don’t want to eat ’em—I want to fight ’em!” Ruggiero was also initially rejected, in his case because he was too short. His interviewing officer told him, “You’re not very big, are you?” Ruggiero replied, “You mean I’m not very tall.” And, when asked if he could kill a man with a knife, Ruggiero said, “No, why the hell should I? I’d just shoot the bastard.”

Dog Company’s experience on D-day and in the Hürtgen Forest form the major part of the book. For D-Day, Dog Company was part of a Ranger force assigned to neutralize German artillery positions at Pointe du Hoc, a high ground location looming over Omaha Beach that enabled Germans to also shell Utah Beach to the northwest and Gold Beach to the east. The only avenue of attack for the Rangers was a frontal vertical assault, the most dangerous of its kind. In the confusion that occurred on June 6, 1944, at Omaha Beach, less than half the assault force landed at Pointe du Hoc, making Dog Company’s role in the successful attack even more important.

Dog Company’s attack of Hill 400 in the Battle of the Hürtgen Forest, which began on Dec. 4, 1944, was a particularly brutal engagement in a campaign noted for its deadly savagery. The reason for the intense level of German defense and counterattacks only became clear on December 16, when the German army launched the counterattack later known as the Battle of the Bulge. Hill 400 was a strategic height that had an unobstructed view of secret German Fifteenth Army troop concentrations in the northern shoulder of the offensive. Capture of the summit by American troops would have exposed the secret activity and compromised German plans.

O’Donnell summarizes what happened to surviving Dog Company Rangers after the war and concludes with a brief account of the fortieth anniversary ceremonies at Normandy, where President Ronald Reagan made his famous “Boys of Pointe du Hoc” speech.

You can buy this book on Amazon (U.S.), on Amazon (U.K.) and for Europeans on Amazon (DE). It’s a must have for all history enthusiasts especially those interested in the Normandy Campaign and the Rangers.