Another great pictorial book that outlines the Fall of Berlin at the end of World War II. An appropriate fire-drenched ending to the horrible regime that was the failed German Third Reich. As the Allied war machines crept up to Hitler’s doorstep, I’m sure the atmosphere was similar to hell for the Nazis cowering in the command bunker. An appropriate ending to such an evil empire that has gone down in history as having so much military potential and culminating in so much death, destruction and disappointment. 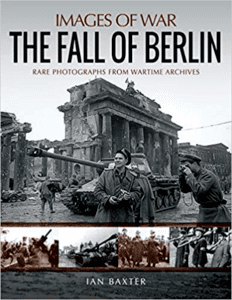 Ian’s pictorial book covers the Vistula-Oder Offensive, The Defense of the Oder, The Battle of Halbe, and the Battle for Berlin.  As the author points out, this book, “analyzes the German defense in front of the Reich capital and then it’s final collapse. Accompanied by in depth captions and text, the book shows how the Wehrmacht, Waffen SS, Luftwaffe, Hitler Youth, and the Volksturm personnel struggled to defend every yard of ground against an overwhelming, relentless enemy.”

Page 16 depicts a still vibrant group of soldiers as Hitler troops the line near the Oder in March 1945. This was the last time he would visit a combat zone. Only a month earlier German forces were in the east being driven back to the Oder. Three weeks earlier, the Eastern front was still Deep in Poland. But at this point in time, March 1945, “Upper Silesia was lost; in East Prussia German Forces were smashed to pieces; West Prussia and Pomerania were defended by depleted troops thrown together, and now the defense of the Oder was being entrusted to exhausted armies that had been fighting defensive actions for months in Poland along the Vistula. What was left of these forces were supposed to hold the Oder front and fight to the death.” A tragic and horrific end for the German Reich clearly depicted in this great pictorial review of the Fall of Berlin.

About the author. Ian Baxter has produced a fine selection of highly illustrated books in the Images of War Series mainly covering Axis Forces in WW2. He is a dedicated collector of rare images and an expert in his field. He lives near Chelmsford, Essex.