Another great historical fiction genre of book that carries us back the end of World War 1. In this series called “The Frontline Fugitives, this particular book has the main characters hunting down Werewolves, Straggler SS teams that were conducting hit and run tactics in Germany towards the end of the war. A compelling story of CID, MPs, the French Armed Forces, and other teams working together to defeat the common enemy. The motif throughout speaks as a strong advocate to the normalization of race relations in the Armed Services. 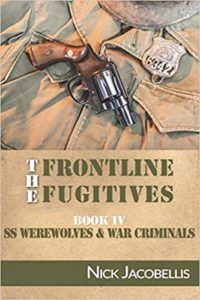 With the series moving from the US to the European Theater of Operations, the theme has maintained consistency from the first book to this fourth book in a convincing way without a lot of churn.

While a team led by Colonel Jim Beauregard and Captain Al Parker collaborate with a French Army team, a team of CID agents under Captain Don Lorenz investigate black-market activities at a supply dump called Q179. During this time in the Army CID agents actively served in the front lines operating like civilian police detectives ensuring Black Market activities were suppressed and the criminals brought to justice.  As the story unfolds in Southern Germany, Jim and Al befriend a German cop while they are held prisoner for a short time. Later that same German cop and his injured son, are found in an American run POW Camp. Jim and Al decide to exonerate the charges and they are freed to work with the team to assist in tracking down the SS Werewolves. The SS Werewolves team is run by SS Major Kessler who is running training camps and issuing orders for disrupting Allied supply lines and mop-up operations.

As the book concludes the author does a great job ensuring we know what happened with eh main characters after the war ends and they attempt to return to normal lives.

As a fan of Nick Jacobellis’ books, I can only hope the series does not end here. I am sure there are some strings left undone in New York!

This book is available at Amazon.com (US), and Amazon.co.uk (UK).

About the Author – Nick Jacobellis is a medically retired US Customs Service Senior Special Agent and former Police Officer. Nick has published over 180 magazine articles and 6 books. He was born and raised in Flatbush section of Brooklyn NY and has an BS Degree in Police Science from John Jay College of Criminal Justice.