Richard Hargreaves’ thorough analysis of the German defense of Normandy through the summer of 1944 provides “the other side of the story” for readers who based their understanding of the campaign on memoirs and studies presented from the Allied point of view.

The Germans in Normandy is a detailed, yet highly readable account of the Normandy campaign from the perspective of the defenders. Hargreaves addresses the campaign chronologically, providing readers with a brief strategic overview that discusses how German combat power, concentrated in France at the end of the campaign to overrun that country in 1940, slowly dispersed to meet manpower needs in other theaters such as Russian and North Africa. By 1942, German garrisons in France consisted of second rate troops who numbers were a fraction of those formations that fought two years earlier. Hargreaves recounts that life as a member of an occupying army was easy, especially compared to combat troops in other theaters. Despite an apparent lack of threats, the German leader, Adolph Hitler entertained plans to create an impregnable fortified system, dubbed “the Atlantic Wall” to ensure no invasion from the west would threaten Germany.  The Allied raid on Dieppe, France in August 1942 alerted the German High Command to the need for such defenses and thus the German forces in France turned to the task of constructing a barrier to invasion along the coast. Work initially proceeded in fits and starts through the fall of 1943, when Hitler appointed Field Marshall Erwin Rommel to oversee the construction of the western defenses. Rommel brought his reputation as an effective combat commander in France and North Africa, along with zeal and energy to the task, and set about leading his troops in establishing a dense defensive network. Subsequent events in June 1944 demonstrated the prudence of these preparations. 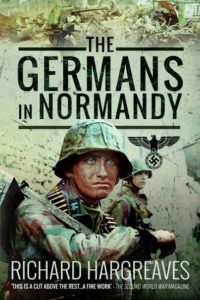 The heart of the book is Hargreaves’s discussion of the actual invasion of France, and the subsequent combat in Normandy. He presents an array of views, from troops manning defensive positions and their operational commanders, to those of the high command reading reports from the front. Hargreaves does an excellent job of intertwining the observations and recollections of participants with his own analysis of the fighting. What emerges is a portrait of confident troops initialing believing they could stop the Allies on the beaches coming to the slow realization that there enemy had come to Europe to stay, and that they had brought significant material advantages with them. Hargreaves ably demonstrates how Allied airpower effectively nullified the German troops’ mobility and opportunities to mass combat power in any sizeable concentrations to generate more than local counterattacks, and the effects that this realization had on the defenders. He illustrates to the reader that the Germans maintained their cohesion and discipline in what was rapidly evolving into an untenable situation as they slowly retreated eastward away from the French coast.

Hargreaves’ contrast between the views from the front with the German High Command’s perception of events in Normandy reveals the dichotomy between the two worlds. German military leaders could not replace the losses sustained by the combat units in men or material, however Hitler and his senior subordinates continued to insist that the formations contest every foot of ground in Normandy, rather than conduct an orderly withdrawal in order to shorten lines and reconstitute for further combat. Decision makers refused to acknowledge that fighting spirit could not match the material supremacy of the Allies, to the point where, many subordinate staff officers within the high command convinced themselves that Hitler and his supporters must be eliminated and new German government formed to try and negotiate some form of cease fire before Germany was destroyed. This plot eventually evolved into an attempt on Hitler’s life and an aborted coup known as Operation Valkyrie. The author’s recounting of the planning and subsequent failed execution of this plan is one of the strongest sections of the book.

Hargreaves is an experienced writer and journalist, with two previous volumes on the German Army in World War II to his credit. He adds to his reputation with The Germans in Normandy. It is an honest portrayal of men who fought well for a bad cause.

This book is available at Pen & Sword Books, Amazon UK, and Amazon US.