They Are Only Gone If They Are Forgotten – The story of one of the original companies with the 82nd Airborne Division, 505th Combat Team, Third Battalion, Headquarters Company 1942-1945. Tense Moment Publishing. Author – Steven Robert Zaley.

Steve’s book covers the story of the 505th Parachute Infantry Regiment before, during and after World War II. The 505th is THE premier infantry regiment in the 82nd Airborne Division and the US Army. All other units are striving to meet or beat their records in combat and in peacetime. The 505th, since its inception were Jumpin Jim Gavin’s boys. Gavin was their first Regimental Commander and later became their Division Commander and kept a close eye on them throughout the rest of the war after D-Day when he was promoted to replace Matt Ridgway. Both men were giants in the US Army Airborne Community. 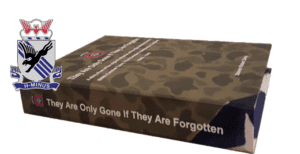 Steve’s father served with the 3rd Battalion 505 Combat Team with distinction and honor during World War II. He was one of the few men from that unit that made all four combat jumps and lived to see the end of the war.

I have heard many people describe this book over the past year and all of them have had nothing but praise and high compliments for the subject, author, content and context of the book. Weighing in at 5 pounds, 600+ pages, a ton of neat memorabilia items from the author’s father and his buddies he served side by side with. You may ask, like what? The book is flush with lists of A-bag contents, B-Bag contents, what was required to be in each cargo pocket on the combat top and pants, manifests, combat orders, Static Line articles, newspaper articles, pictures of Max the parachuting dog, patches, ribbons, details of each combat jump, pics of escape maps, invasion currency, air movement tables, all great paratrooper keepsakes from the war.

For serious book collectors or historians Steve Zaley’s book is a must have. It should be right next to, Ridgway’s Paratroopers and Devlin’s book Paratrooper. This is an instant classic. We will be discussing this book in our 82nd Airborne Division Facebook groups, the 82nd Signal Battalion Newsletter, on argunners.com and everywhere else we discuss 82nd History.

The story is based on actual events of the everyday lives of the men of the 505th Combat Team, 3rd Battalion, Headquarters Company, 82nd Airborne Division from the period 1942 through 1945. The names are real. The situations, personal conversations, arguments, and comments are presented the way they took place in World War II. The events were described to the author by the men who were original members of the Combat Team.

The author provides these comments in the foreword, ‘from childhood through early adult life I listened to my father’s stories about brave men who risked everything they had in order to defend our nation against a threat that was all too real. As the years went by my wife cautioned me to be patient and listen to my father’s stories. Someday he will not be here to tell them.’ That time has come and passed, and she was right.

Podcasts about the book can be found here, https://82airbornebook.com/wwii-82nd-airborne-podcast/.

About the author; Steve Zaley spent three decades listening to his father’s stories about fighting in World War II with the 82nd Airborne Division’s 505th Combat Team. He spent another twenty years writing a full anthology about his father’s experience. Steve is married and makes his home in Arden, North Carolina.

This book is available on Amazon.com (US) and Amazon (UK).