This book is the culmination of 15 years of research dealing with I/SS-Panzer Regiment 3, from its inception in 1942, when it was equipped with Panzer III’s and IV’s, until its conversion to the Panther tank during late 1943. The book covers the history of I/SS-Panzer Regiment 3 when it was equipped with Panther tanks. From the summer of 1944, Abteilung fought in Siedlce and later in the defensive battles east and north east of Warsaw. Later during 1945, the Abteilung would take part in the Konrad operations in Hungary in an attempt to relieve the forces trapped inside Budapest. By March 1945 the remnants of I/SS-Panzer Regiment 3 was in full retreat and would eventually surrender in May 1945 in Austria.

REVIEW: Engaged in Eastern Front combat from 1943, starting with the recapture of Kharkov and enormous battle around Kursk shortly after, the unit received it’s first Panther tanks at the start of 1944. By July of that year the new machines and their crews were put to the test in Poland trying to repel the massive operation “Bagration”, launched by the Soviet’s a month earlier. After heavy combat it was put in reserve from November but before the end of the year an alert order put them on their way to Hungary. The new year started badly when the highly esteemed Abteilungskommandeur Meierdrees, commanding the unit since October 1942, was killed within one hour of starting the advance when a SU-85 blew his turret off. 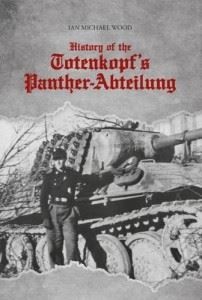 Besides the enemy a constant battle was also fought with their new equipment as they discovered it’s flaws in action, only worsened by the shortage of spares and bad fuel quality at the time. As the situation deteriorated even further the crews without vehicles were used as infantry as they fought to stem the Russian advance to Germany upto it’s unconditional surrender.

The first and shortest chapter is on the unit’s initial Panzer III and IV training in 1942 and their combat actions in 1943. The second chapter focuses on the training period with the Panther tanks and subsequent combat in 1944, offering an almost day by day description of most organizational events and/or movements of the unit. The many period sources used, including dozens of Russian reports from units which engaged Totenkopf’s Panzer’s, are evident from the detail contained in the information. In the same manner chapter 3 paints a clear picture of the unit’s situation and locations during the desperate battles in the last stage of the war.

Itself evolving from a short appendix to his research on the 3.SS-Panzer-Division “Totenkopf”, Wood’s short history of I./SS-Panzer-Regiment 3 holds 6 appendixes. The first appendix lists all command positions of the regiment and it’s companies followed by one on it’s Knight’s Cross recipients including citations. A short appendix 3 and 4 respectively list the officers killed in the line of duty and issuing of vehicles in 1944. Extensive attention is given to the operational status in 1944 and 1945, listing how many tanks were operational and/or awaiting a short- or long term repair, on a regular basis. The final appendix deals with total Panther losses suffered, going into details such as numbers, causes and locations.

After a listing of it’s many sources the book concludes with a photograph section, containing about 30 pictures with detailed captions, most from private collections.