The author, Gilberto Villahermosa, does a great job of detailing the II Corp’s intense and focused fighting in Normandy as the allies pushed them south and east. During this period of the war the II Parachute Corps did not have an effective replacement program, had no consistent air cover, and often did not have the numbers to match the Allied forces. Hitler had concentrated his Paratrooper forces in Normandy and Cotentin Peninsula over the course of a year prior to the Normandy Invasion. It was a brilliant strategic move. However, not providing that same force with the appropriate air cover, replacements, and weapons system was a tragic mistake that cost the Paratroopers dearly. 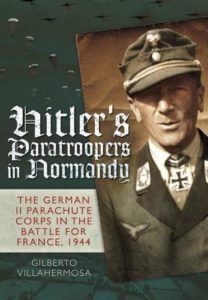 Although forced into some precarious battles, the German Paratroopers fought the best that they could with what they had. As the Allies conducted their breakout from Normandy and pushed to St Come-Du-Mont, Carentan, Hill 192, Hill 122, Mont Castre and St Lo they faced a determined and tough German II Corps. Not all of the German II Corps were top tier units but the esprit de corps that comes with serving in a German Paratrooper unit required a resilient soldier that was relentless on the pursuit, counterattack and the defense as well. It is a trait you find in all paratrooper units whether they are Germans, American, Belgium, British, or Canadian. Paratrooper are expected to be better soldiers and perform better under pressure. Perhaps the German Paratrooper were not given enough credit for their fighting skills post WWII, but they are certainly praised these days. In the early years of the war the German paratroopers had been the vanguard of Nazi Germany’s offensive strategy, driving their way into Scandinavia, Holland, Belgium, the Balkans and Crete. After Crete Hitler made a major shift in planning and relegated the Paratrooper units to a lesser tole as straight leg infantry. This was a horrible mistake. As far as the Defense of Normandy is concerned, he could not have picked a better group of soldiers to be the primary defenders against the allies in Normandy! The example set by the II Corps Commander; General Eugen Meindl was the best the Germans had to offer. He was a top notch with extensive combat experience with combat jumps into Scandinavia, the Low Countries, Corinth Canal and later Crete in 1940. Meindl was tough and experienced Paratrooper officer and veteran who was known to care for his soldiers and look after them on the battlefield.

The author focuses on Meindl and his II Parachute Corps service from the Allied invasion on 6 June through the end of August 1944. Meindl’s forces fought with bravery and determination and were forced to fall back in the face of superior allied infantry, armor, and air cover. These paratrooper finished the war suffering huge losses which was not in line with their dedication, fighting ability, and level of potential for a formidable combat unit.

About the author; Colonel (Retired) Gilberto Villahermosa is an Army Master Parachutist, Strategist, and Military Historian. He holds master’s degrees from Columbia University and has authored several books, including Hitler’s Paratrooper: The Life and Battles of Rudolph Witzig.