This is the photographic history of the Waffen-SS in combat on all fronts. The short six year history of the Waffen SS spanned triumph and disaster, and their story can be traced through these powerful images, which clearly document the reality of combat from 1940 to 1945. These rare images span the combat history of the Waffen-SS from the optimism of the opening phases of the war in the west through the challenges of Barbarossa and the long and bloody retreat against a numerically far superior enemy in both the east and the west. This powerful photographic record is essential reading for anyone with an interest in the course of the war from the German perspective and clearly demonstrates the scale of the task undertaken by the Waffen-SS on all fronts.

REVIEW: To quote from the back cover… ‘‘this is the photographic history of the Waffen-­SS in combat on all fronts” and goes on to tell you that the author, Bob Carruthers, is ‘‘one of the UK’s leading military historians”.

That being said this book is basically a book of photographs of the Waffen­-SS taken by the SS-Kriegsberichter (War Reporting) Unit from 1940-­1945 divided into three chapters. They are, The Waffen-­SS in the West 1940; The Waffen­-SS in the East 1941­-1943 and the Waffen-SS in Combat 1943­-1945. It is 160 pages long with as noted a plethora of photographs taken by said Kriegsberichter unit all captioned by Carruthers.

After a brief one or two page introduction to each chapter “setting the stage” as it were, the book is mostly photographs BUT the photographs have captions that show why Carruthers is a leading military historian. The captions though short are thorough and descriptive and let you know what is going on in the photograph and also what is the surrounding result or the time frame of the war at the time the photograph(s) were taken. 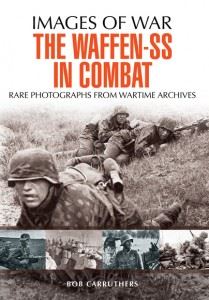 He does make special note in the first chapter, however, of two “massacres” perpetrated by the Waffen-­SS against surrendered British troops without noting that the British troops, in the Les Paradis affair, allegedly were using dum­dum bullets and had misused a truce flag. Also Carruthers fails to note is that the SS Officer, Knochlein, was hanged after the war for the crime and that, even at the time, many SS officers were appalled by the massacre and some reportedly challenged Knöchlein to a duel. The second massacre, Wormhoudt, while committed by the Waffen­-SS seems to have been a leaderless situation.

It is interesting to note that these are the only two incidents mentioned in the book attributable to the Waffen-­SS. On page 135 Carruthers captions a picture of Waffen­-SS prisoners captured during the fighting in the West. Carruthers notes that “these men faced a frightening ordeal at the hands of the Western Allies. This pales into insignificance compared to the treatment meted out by the Russians” glossing over any incidents that the Allies may have committed.

I would guess that what Carruthers is putting across by detailing the two SS incidents and the statement on page 135 is that “war is hell” and that on both sides there were what we would consider war crimes committed but those of the victors aren’t publicized or prosecuted.

The photographs in the book, all taken by the Kriegsberichten and chosen by Carruthers from their archive, are almost all from a safe distance “behind the lines” but they show the Waffen-­SS in various situations, areas and with various equipment. The photographs are strikingly similar and I venture to say that if the photos were mixed together and the reader was asked to divide them into Carruthers chapters any ones that you matched to the period would be because of luck.

Nowhere in the book, although the Waffen-­SS are supposed to have committed them, are any photographs of atrocities or war crimes. One might think that since so many war crimes and atrocities are attributed to them that one or two photographs might have made it into the book. The book on its last page does make mention of the fact that the Waffen-­SS suffered more combat deaths in the war than the combined US casualties (killed and wounded) for the entire war.

If you are looking for a book providing the written history of the Waffen-­SS this is not the book for you. However, if you are seeking a book that provides from the period photographs of the Waffen­-SS on the Eastern and Western fronts then you might consider purchasing this soft cover 160 page book.

After a brief one or two page introduction to each chapter “setting the stage” as it were, the book is mostly photographs BUT the photographs have captions that show why Carruthers is a leading military historian. The captions though short are thorough and descriptive and let you know what is going on in the photograph and also what is the surrounding result or the time frame of the war at the time the photograph(s) were taken.

2 thoughts on “REVIEW: Images of War – The Waffen-SS In Combat by Bob Carruthers”