Book Review of Images of War– The Battle for Arnhem 1944-1945 by author Anthony Tucker-Jones. Pen and Sword Publishing.

An excellent catalog of images related to the tragic Operation Market Garden- Battle for Arnhem. The Battle for Arnhem has confounded military historians for years. Only a few months after the D-Day Normandy landing which seemed to display an unprecedented string of crushing defeats of the Nazi power arrayed against the Allies, followed by Operation Market Garden which was nearly the exact opposite. An allied near-disaster. 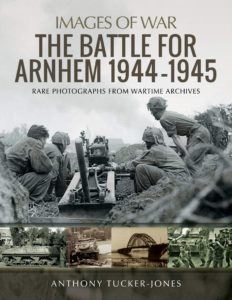 The Battle for Arnhem displayed in over 200 photographs, accompanied by a detailed narrative, depicts the horrors of battle at its most fragile point. A good mix of those we have seen before and some we have not. Photographs are all black and white but very detailed.

This is one of the few books on Operation Market Garden that reveals the huge mistakes made by the allies when planning and executing airborne operations without the proper experience needed for in depth intelligence analysis of the target objective. It also peels back the skin to reveal the candid remarks of the General Officers and warriors that were on the receiving end of being abandoned by your own leadership on the battlefield. The large egos of Eisenhower, Montgomery, Brereton, and Horrocks are in play here. When planning an invasion of this size it requires detailed intelligence analysis and close coordination for air support, resupply, follow on forces, and most importantly a winnable concept of operation that removes battlefield jeopardies versus hampering soldiers on the ground.

The biggest and most heartfelt tragedy was the insertion of the British paras eight miles from their initial objectives near Arnhem. It doesn’t sound like a long distance until you factor in, they were lightly equipped, had no transportation, and faced a quick formation of enemy in the counterattack led by battle hardened, experienced battlefield Commander, Model. The British paras were dropped miles from their objective although there were drop zones very close to the objective bridges that were used only days later by follow on Polish Airborne forces. It was a perfect storm of mistakes!

Operation Market Garden and the Battle for Arnhem will forever be remembered as the antithesis to the D-Day Invasion. The arrogance, flippant remarks and attitudes, cavalier discount of lives related to the British and American Paratroopers, by British and America leaders after the battle reflect poorly on their leadership and their legacies. A dark stain that cannot be erased.

The British and American Paratrooper forces would recover within weeks and reform to continue their push through the heart of Germany towards ending the war. The questions will always remain with us. Why the complacency? Why the sacrifice of great men at the expense of egos? War will always have its wins, losses and tragedies. This one has always hurt paratroopers to the core and left a gap of understanding between the soldier on the ground and the leader in the rear.

Published in 2019, this book will continue to resonate over the years for a grateful audience of WWII historians.

This book is available on Amazon.com (US), Amazon (UK), and Pen and Sword Publishing. Be sure to check out these Stunning Colorized Photographs of Operation Market Garden.