The Final Days of the Reich is the latest in the popular Images of War series by Ian Baxter. Drawing on rare and previously unpublished photographs accompanied by in-depth captions and text, this book is a compelling account of the final weeks of the Nazis’ struggle for survival against overwhelming odds. Each photograph fully captures the tension, turmoil and tragedy of those last, terrible days of war as Wehrmacht, Waffen SS, Luftwaffe, Hitlerjugend, Volkssturm and other units, some of which where comprised of barely trained conscripts, fought out their last battles.

Exhausted and demoralized skeletal units must have been aware of the impending defeat. Yet the German General Staff was still resolved to fight at all costs. By late March 1945, less than 100 miles east of Berlin, some 250,000 German troops had slowly withdrawn to the Oder, and what followed was a series of fierce and determined defensive actions that would finally see the Germans encircled and fighting the last desperate battle within Berlin itself against overwhelming odds. 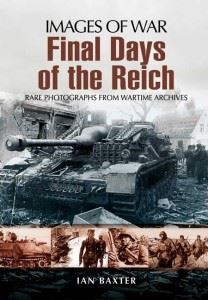 REVIEW: Ian Baxter has done another great job compiling a photographic journey throughout a certain period of time, in this case the final days of the Reich. His earlier photographic books include the Nazi Concentration Camp Commandants 1933-1945: Rare Photographs from Wartime Archives, Hitler’s Mountain Troops 1939-1945, German Guns of the Third Reich, Afrika Korps, The U Boat War 1939-1945, Belsen and its Liberation and plenty more… I am a big fan of dedicated photographic books as it is perfect for research and if done well, it may become an excellent reference source.

First thing that I need of my heart is that – especially – with books that are compiled mostly with images that it should be on glossy paper or paper that let the details of photograph come out right or can be scanned to zoom in for research purposes and sadly that is was this book misses. It may or may not be a problem to people who just want to use the book to get a look into this period of war however when you are willing to use it for research (either uniform wise, material, identification..) the photographs come in medium quality especially for a dedicated image book.

Although almost all photographs enjoy a caption, it misses some more in depth information. Most of the time no location is given or when the photograph might be taken. Another example: on page 137 you’ll notice a Feldwebel being decorated with the Ritterkreuz (Knight’s Cross), which was the highest valor award a German soldier could earn, by a General however no names are given. The caption just notes “a foreign General decorates one of his men for bravery in the field during the Battle for the Baltic States (…)“. It would have be nice to learn more about the soldier, why he was awarded the Knight’s Cross or who this ‘foreign’ General is. He might have been a more thorough in his captions. As on page 18, where you’ll see personnel of the Luftwaffe in the photograph whilst the caption reads “Wehrmacht troops“, so he could have been more specific.

Although overall this book is great for people that are looking for a photographic book where they can see late-war photographs of the German army. There are a few great photographs in there, that I haven’t seen myself (which is getting rare!). The captions are also easy readable and great for learning for those that do not know much about German equipment, armored vehicles and weaponry. However for researchers – such as me – the quality of the photographs could have been better or the caption could’ve been more in depth (identification of high ranking personnel, area or time it was taken, …).

You can buy the book at Pen and Sword Books or on Amazon (U.S.) and Amazon (U.K.)