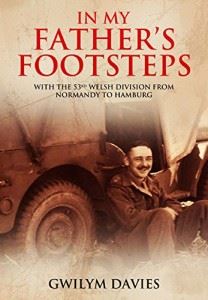 In 1944-45, Capt. G.H. Davies served with the hard-fighting 53rd Welsh Division. He was an artillery officer in command of a battery of 25-pdr field guns and saw action from Normandy to the final surrender of Nazi Germany. Capt. Davies was present at the Normandy battles, the fierce fighting for s’Hertogenbosch and the Battle of Arnhem. During the course of the war, Capt. Davies kept a diary and also snatched a few photographs on his treasured camera. When the opportunity arose Capt. Davies liberated a camera from a fallen SS officer and, after the war, had the film developed. The film contained graphic images of the war from the German side of the line. Seventy years on from the events, the wartime diary, the photographs of the guns and the photographs taken by the dead SS officer were the inspiration for the son of Capt. Davies, television producer and writer Gwilym Davies, to undertake an emotional return to the battlefields, which his father had described in his diary. The result of that pilgrimage is an important new book which builds upon the wartime diary and the photographs to produce a powerful record of one man’s war service with the guns of the 53rd Welsh Division. The book also contrasts the experience of Capt. Davies with those of the Germans on the other side of the line. Gwilym Davies is himself an accomplished photographer and his photographs of the 70th anniversary celebrations and the memorials provide a poignant counterpoint to the events of 1944. In My Father’s Footsteps is also a major TV documentary, which will be broadcast to coincide with the 70th anniversary of the Battle of Arnhem.

REVIEW: In My Father’s Footsteps: With the 53rd Welsh Division from Normandy to Hamburg tells the story of the author’s father, Captain G.H. Davies, who was an officer in the 497 Battery, 133rd Field Regiment (RA) of the Division, who were equipped with the 25 pounder field guns. The book was created with the help of his father’s dairy, memories and photographs from his album. His son and author, Gwilym Davies, completed it with extra background information on the famous British 25 pounder, the battles his father participated in and german intelligence reports in order to let the readers know what devastating effect the Division’s artillery had on the German units.

Nicely divided in 12 chapters (‘In My Father’s Footsteps’, ‘Landing in Normandy’, ‘The Odon Valley Battles’, ‘The Falaise Pocket’, ‘The Advance to Holland’, ‘The Battle for ‘s-Hertogenbosch’, ‘The Onset of Winter’, ‘The Ardennes – The Battle of the Bulge’, ‘The Reichswald Forest – Operation Veritable’, ‘The Rhine Crossing – Operation Plunder’ and ‘The Final Push’) on a total of 213 pages (not counting the unpaginated photographic section in the book which counts 36 photographs, 2 maps and 1 document).

The minute I started reading I immediately got drawn into the book, as the author includes parts of his father’s dairy which are written in his own words. His (Capt. G.H. Davies) writing is filled with ‘typical’ military humor, his feelings and random excerpts of what a cadet / soldier goes through in his military career. The way he tells his story and what he – at that moment – went through, gives you plenty of room to imagine how it was back then. This is incredible hard, if not impossible, for a person – who didn’t live through that time of period – to tell this to its readers and let the readers know what went on back then or how they lived through that. Since the author uses many parts of his father’s dairy, you now can finally place yourself (at a certain height) in that time.

This books gives you a great insight in what horrible fightings the 53rd Welsh Division went through but more specifically it tells you the story of an officer from the artillery, one of the most forgotten branches of the army, but one that is unmissable. The author, Gwilym Davies, even put great effort into making a film of his personal journey to follow his father’s footsteps. I didn’t see it but I feel like I should after the reading the book. Gwilym Davies did a great job into tracing his father’s footsteps and what he has been through, making this book an absolute recommendation.

There are a few errors in the author’s writing, such as on page 47 where he states that the 10. SS-Panzer-Division ‘Frundsberg’ participated in the Ardennes (Battle of the Bulge). However these errors – in my opinion – do not harm the book in any way. There are just – for me – two little disappointments: (1) I would’ve loved more of his father’s personal dairy entries related to the fightings in Normandy, Arnhem and Ardennes; (2) Although the author traced his father’s footsteps and the places he was at, there are sadly no photographs of these places. It would have been nice to have some photographs of the places he fought at, or remembered, shown in the book.