REVIEW: Do not hope for any real story line or plot in this book. It is nothing more than a collection of letters written by John “Jack” Homer Woolsey from April 2, 1943 to October 1, 1945 presented in chronological order. After reading it I would state that it would be an average and very general go to book for a source documents for one who would like a superfluous reading of letters of a enlistee and later a Lieutenant (Navigator), who in the words of the editor, left his “devoted dog Toots and his horses Koli and Lady”.

It is apparent, given, this information about “Jack” that the Great Depression didn’t depress him too much and that he came from a doctors’s well to do family. The letters are mostly general in nature and center about what Jack does, what Jack feels, and what Jack wants. He seems very concerned that a hometown paper, “The Democrat” gets to him in a timely fashion and in many of the letters asks for the family to send him things like a pen, socks, fur lined gloves, checking his finances, etc. I did learn from reading his letters that it seems the Army Basic Training had changed little from when Jack was in it (1943) to when I went through it (1967). The same KP, the same PT, the same threat of “washing out” and going down “gunner’s row” (i.e.: no commission and you continue your Army “career” in the enlisted ranks) 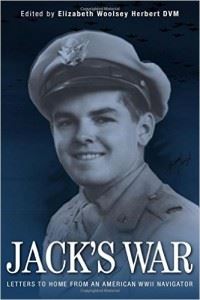 The book says little about what is going on in the world about him and while he has pictures of his B­24 Liberator crew and a list of them along with their home towns that’s it as far as they are concerned. They may just as well be in the Luftwaffe. In fact, most of them get mentioned by crew position and state only and one unlucky one just gets name and crew position. The letters mention some particulars of life going on around him but only as to how it affects Jack he mentions he “really does like combat” (P.194) I found that a little odd because from personal experience, talking to comrades and veterans of several armies and wars and the many books I have read one participates in combat but one doesn’t “like it”. Then I read his mission summaries in the back of the book. They started on October 8 February 22. 1945. His plane was, it appears, never attacked by fighters (although others in his formation were) and “flak” was the worst enemy action he had to put up with you can see why he “really does like combat” because if he saw casualties, the torn, bleeding and dismembered, one wonders if he would “really like it”.

“Jack’s War” is, as stated, a collection of letters sent to his home by John “Jack” Woolsey and if you want to know what motivated and were the concerns of just one B­24 navigator in training, and on duty both in the states and in England then this is the book for you. If you are looking for descriptions of combat then you would just want to read the blurbs of the mission statements #1­35 on pages 222­291 of this 293 page books but be forewarned many of these mission summaries are just one two three general paragraphs long and are just impersonal summaries.

One final item, the editor notes, that her grandfather told her that her “father was not the same man who left to go to war”. No one who “seen the elephant” is the same man. In Jack’s case he also went directly from a cushioned homelife (they had a maid at one time who retired to England) to being on his own. That alone will change you. Throw in the Army and your going to get changed some more. Add in the war and, as Marcus Licinius Crassus said about his son who accompanied him in his conquest of Spartacus, “send a boy to war and, if he survives, he will come out a man”. The experience it seems applies universally to soldier throughout history and is not unique to Jack.

If you want to see what the went on in the life of one navigation officer mostly from his letters to home this is the book for you. “Jack’s War” is a compilation of the letters of one small cog of a mighty war machine that tells some of the background of what his wants were, what he experienced, what he felt and what he did for about two years and ten months in the US Army Air Corps during World War II.

You can buy Jack’s War: Letters from an American WWII