Book Review of Joys of War – From the French Foreign Legion, the SAS and into hell with PTSD by John-Paul Jordan, Pen and Sword Books.

A striking reminder that all the warrior’s kills, destruction, battle, wars, narrows escapes from death have an end result on the body as well as the mind. This book narrows the vision to focus on the isolation and helplessness a warrior experiences near the end of their road. As John-Paul Jordan explains; his story is “a testament to the strength of the human spirit; to get back up and lead from the front”. He did not “go thru all that” for the sake of saying I went thru “all that”. A great read for modern Special Forces operators. A straight forward, no bullshit look at the impact of war on the individual soldiers. 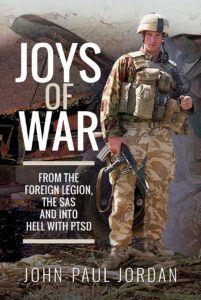 John-Paul Jordan tells a hero’s tale of volunteering for the French Foreign Legion at a young age. That assignment and the hard, brutal training motivated him to follow that assignment by training for selection into the British Special Forces, Special Air Services. His stories of train-ups and the impact on the body and mind will resonate with the modern-day special forces operator. John-Paul also served in mercenary forces, my words here, deploying to Afghanistan, Iraq, and Libya fighting his way through the modern battlefield and the opportunities to lead combat forces, civilians and news teams into some of the most dangerous war zones in the world.

I found John-Paul Jordan’s style of writing/speaking perfect for my style of reading. I would like to think I write in this form. He writes with a straightforward approach, a lot of Irish slang, which adds a great flavor to the overall tone of the book. He speaks from a voice of deep experience and a good soldier can tell he knows what he is talking about and he explains it in a way that is clear and concise. I truly enjoyed this book on many levels.

More pain and misery via the PTSD train

Unfortunately, the Joys of War, (I hope you catch the pun there!) and the warrior’s path of destruction cover all special forces soldiers with glory. Rightfully so. But what I am hearing from John-Paul, about the after effects strikes a similar tone to both UK and US soldiers returning from war and dealing with the horrors of what they have done on behalf of their country.

For all of the pain and misery John-Paul, and most modern warriors, went through to qualify for selection and then deploy as a special forces soldier, at the end of his cycle, the end being – time to settle down and have kids, be a father, establish a home – you are forced to come to terms with all you have done. When that time comes, usually crashing down like a hard, southern Wales rain, you may find your mates, regiment, veteran organizations (US-VA, UK-MOD) not having your back like you expected them to!  You will have to follow his example and let the fog of opioids and painkillers clear, let the alcohol wear off, and help yourself and see it as another challenge, such as selection phase or a long deployment, and simply knock it down with all your might. “if we deny your sickness, we deny our treatment. You can’t have one without the other.” I raise a pint of Guinness to John-Paul and say, well done Irish, Well done!

This book is available on Amazon.com (US), Amazon.co.uk (UK), and Pen and Sword.