Presented here are the biographies of the 130 men of the Fallschirmjäger—Hitler’s elite paratroopers, who won the Knight’s Cross and its higher grades. These men fought on nearly every front during the Second World War, from their first action in Denmark in April 1940, to their last major battle at Monte Cassino. A total of twenty-four Knight’s Crosses were awarded to Fallschirmjäger troops during the battles of Monte Cassino and in the airborne invasion of Crete with the remainder awarded during the fighting in France, Belgium, Holland, Italy, Russia, and at least one in North Africa. These tough, elite soldiers parachuted behind enemy lines and were one of the most successful units during the Second World War. The book gives details of their promotions and other medals and decorations and is well illustrated with over 200 photographs.

This is a great book for basic research to Fallschirmjäger personnel that earned the Knight’s Cross to know how they looked like, what awards did they earn, promotion dates and a small biography on their military career. However for more in depth research you may be disappointed. Rudely taken, you can learn about the previous mentioned data, if just Google these days and gain an answer in four – five seconds. Other books have covered this same subject so what we want these days is information we didn’t know about before: personal life, in depth military career, facts we didn’t about and to see unpublished photographs.. 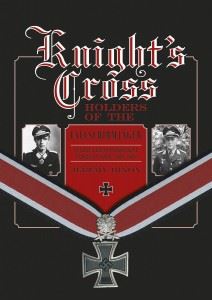 Don’t expect to find much in depth biography of the Fallschirmjägers in this book. You’ll mostly find a shortened version of their military career: which units they served in, major battles they participated in, promotion dates, awards they earned and a smaller portrait. The biographies are mostly filled on one or two pages. The biggest biography to be find in the book is that of Kurt Student.

I must admit that some of the biographies are confusing or don’t tell the whole story, especially I noticed this, if the author talks about their fate. For example the first Knight’s Cross holder listed Herbert Karl Abratis, who was killed in Action on 28/29th March 1945 by a shot in the neck. You can only find this information captioned beneath his portrait (on top of the page) however in the biography beneath you can’t find anything on this matter. It just notes: “On 28th March 1945 his unit was engaged in defensive fighting in the breach in the Oder Front south of Stettin-Rosengarten.” That’s it.

Another example is Wolfgang Henner Peter Lebrecht Graf von Blücher: Although he was killed, the author confuses me with adding also his KIA brothers “After winning the Knight’s Cross, he took part in the invasion of Crete, where on 21st May 1941, along with his two brothers he was killed. The first to fall was Hans-Joachim, who was attempting to resupply his brothers, Wolfgang, with ammunition when the latter and his platoon were surrounded by members of the British Black Watch. Hans-Joachim had grabbeb a horse (…) but was shot in front of his brother. A little while later the same day the third brother (…) nineteen-year-old Leberecht Graf von Blücher was reported killed (…).” Now I’m leaved with question marks as how did Wolfgang fell, about who the biography should be. 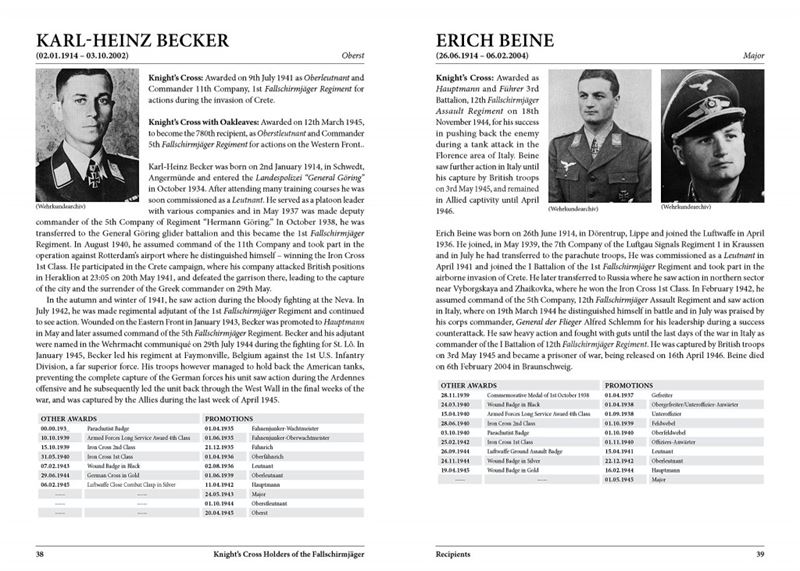 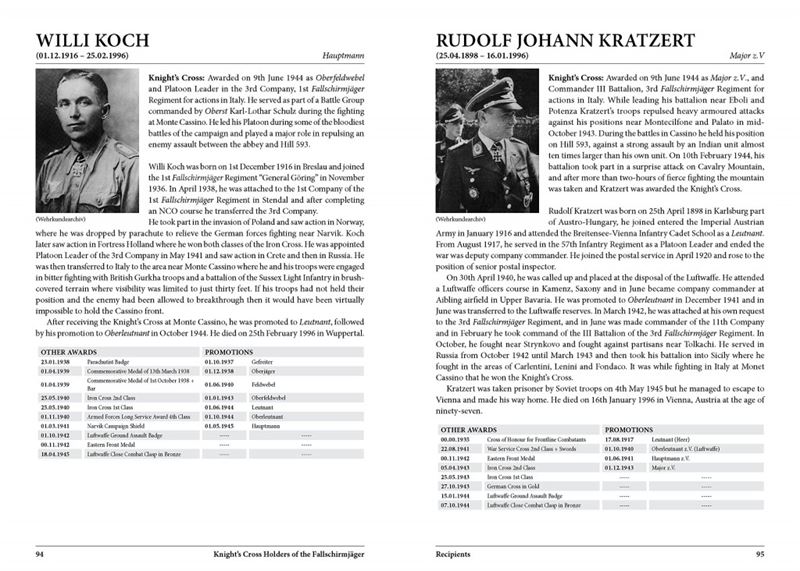 Although the above scans always show a global biography that ends with they being born and when – where they died, it doesn’t always ends this way.

I also should note is that the biographies sometimes don’t tell you – at least globally – how they ended their career, if anything special occurred afterwards or so.. Question marks are left behind when you’ll be doing research. One example of such is Kurt Gröschke, although he passed away in 1996, the author ends the biography with “On 8th February (Editor note: 1944) his forces prevented the enemy from breaking through to the Cassino-Rome road.” What happened afterwards? Was he captured? Did he fought until the end of war? Since Kurt Gröschke earned January 9, 1945 the Knight’s Cross with Oak Leaves but that is just noted on the top of the page where the author notes he earned it and where. Thought the actual biography doesn’t tell you anything behind February 8, 1944.

The index of the book is found on page 30 – 32 which contains the recipients, organized alphabetically. It starts off with Herbert Karl Abratis and ends with Otto Zierach. In total there are 130 recipients. On the previous pages, the author tells you more about the most important awards the Fallschirmjägers could earn and wrote an introduction.

As said before this is a great book for basic research to Fallschirmjäger personnel that earned the Knight’s Cross to know how they looked like, what awards did they earn, promotion dates and a small biography on their military career. Should you be looking for a book that to perform in depth research, you may be disappointed.

Rating this book is hard, I’m a rating this book in a Researcher’s view or just someone whose interested to learn more about these men? I’m giving this the benefit of the doubt and hope the author will cover his future works more in depth, tell us about facts we didn’t know yet and add more exclusive photographs.