An excellent expose capturing the significant contribution of the Spanish fighters of the 250th Ski Company that served in the German Wehrmacht at Lake Ilmen on the Russian Front during World War II. The book outlines the sacrifice and dedication of these soldiers and how they adapted to the harsh Russian winter conditions. 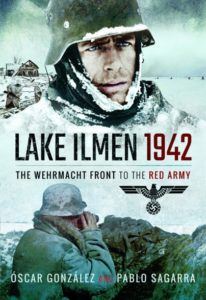 Lake Ilmen is a large lake in the Novgorod Oblast of Russia. It’s a historically important lake, which formed a vital part of the ancient trade route from the Varangians to the Greeks. The city of Novgorod – which is a major trade center of the route – lies six kilometers below the lake’s outflow.

The Battle for Staraya Russa was part of the attack of ArmeeGruppe Nord towards Leningrad.

Generally, Lake Ilmen was an unknown battle fought with a tenacity where the ambushed 290th Division were attempting to hold their ground. The men of Ski Company of the Spanish Blue Division was requested to relieve the Germans. Facing temperatures near – 50° F; the majority of the personnel were disabled with frostbite, however most battled fearlessly before they fell back. This book focused on the individual soldier stories from this battle and their eyewitness accounts. A great story of sacrifice complimented with tons of photos, maps and battlefield details. Although this epic struggle is well known in Spain it is now presented from a major publishing firm in an excellent format.

This book is available on Amazon.com (US),  Amazon (UK) and Pen and Sword Publishing

Published in 2019, this book will continue to resonate over the years for Spanish historians of the Russian Front during World War II. The Spanish 250th Ski Company paid their dues on the field of honor fighting for the Germans in a lost cause against the Russians and the cold winter that has been the downfall of many great armies.