The 28th SS Volunteer Grenadier Division ‘Wallonien’, which mostly consisted of French-speaking citizens of the Kingdom of Belgium – first as part of the Wehrmacht, and later in the ranks of the Waffen SS – fought as one of the national legions against the Red Army on the Eastern Front in February 1942. The Walloons gained fame during the legendary resistance in Cherkassy Pocket, where in early 1944 they lost more than fifty percent of their strength. In the summer of the same year they fought a defensive battle in Estonia in the region of Dorpat, and in February 1945 were directed to Western Pomerania, where until the last days of the war they put up a stubborn resistance to the armies of Stalin.

This book, which was originally published in Polish, is based on the unpublished memoirs of participants of these events, and is the first account to describe the Walloons’ participation in the mysterious Pomeranian campaign in such a detailed manner. It tells the tragic story of the Walloon volunteers, who at all costs tried to stop the onrush of the enemy standing at the gates of the Third Reich. The Pomeranian odyssey led by the controversial and infamous Volksführer Leon Degrelle went on for three months, and the trial meant death and courage. Stargard, Altdamm, Neu Rosow – these are locations, that became synonyms for unconditional sacrifice. They are also a symbol of kameradschaft, of a group of tough guys and daredevils, who were determined to stake everything on one throw of the dice.

The book is illustrated with unique photographs, known so far only to a small group of people. These are complemented by a special comic created by the French artist Godus and with images made with great attention to detail, which were produced for historical reconstruction, showing silhouettes of the Walloon soldiers. It is worth noting that some of these were made in the same location where the fighting raged in April 1945. 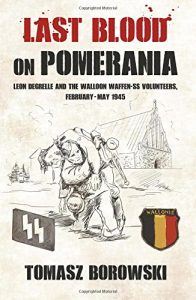 Bearing the brunt of the fighting shortly after arriving in Pomerania in Februari the volunteers of the 28. SS-Freiwilligen-Grenadier-Division „Wallonien“ spend the next months making costly contributions to operation “Sonnewende” and the subsequent Oder defense. For many men in this unit the term “Walloon volunteer” did not apply as it also included French and Spanish volunteers, the latter disobeying Franco’s orders to return home, aswell as Walloons recruited in a not so voluntary fashion. Some could hardly be called men as the increasingly desperate situation saw young, often overly enthousastic, boys drawn into the fray. As those unfit for battle marched towards the West to avoid capture by the Soviets, many Eastern Front recruits and veterans sacrificed themselves in these final battles trying to somehow resist the Russian onslaught. While his soldiers continued spilling their blood on the Pomeranian soil Degrelle wrote a memorandum for Himmler which included a number of items indicating he had no intention to join his men in the “heroic” fight to the death he mentioned in his speeches. Besides requesting permission to leave for Sweden or Portugal he also found time to anger himself for being refused a second last name, “Tcherkassy” with the “von” preposition. The initial advances of 1942, as Werhmacht soldiers at the time, were now a distant memory as even Degrelle’s speeches showed little more ambition then a fight to the death just to let the Americans reach the Oder.

In the 1st chapter Tomasz Borowski gives a short summary of Degrelle’s political activities before the war and initial collaboration, including the creation of the Walloon Legion and its path to becoming part of the Waffen SS in June 1943. Despite attributing this move to a special agreement Degrelle said to have reached with Himmler and Berger, “Using his reputation and fame”, while omiting Himmler’s more likely general plan to bolster “his” armed forces the author does not forget to aknowledge Degrelle and many of his statements were controversial. A second short chapter discusses the transformation to a Waffen SS Sturmbrigade, noting for example the contradiction of a great many fervent Catholic Walloons, including a Catholic chaplain, joining the “Germanic SS order”. After the actions at Cherkassy and Narva their subsequent reorganisation into a division is summarized aswell as events upto the arrival at the Pomeranian Front at the beginning of Februari.

From chapter 3, “First blood”, the book gets into the main subject of the unit’s struggle on the Reich’s crumbling Eastern border during these sometimes confusing and mysterious last months. It outlines the deployment and initial contact with the enemy untill the German counterattack for which they had been brought to Pomerania. In the extensive chapter 4 their participation in this operation, “Sonnewende”, is covered where their tenacity and great sacrifice had them mentioned in a radio announcement by the Wehrmacht High Command on the 27th of Februari. Throughout it and the following chapters on the battles near Altdamm and the Oder the author increasingly draws on first hand accounts from different levels of command, many published for the 1st time. Not surprisingly, and to the delight of many researchers no doubt, this could lead to the correction, or atleast challenging, of statements in earlier publications on the Walloon Division during these chaotic times. In the 9th and final chapter the Walloon’s final battle at Schönwerder is outlined, after which most attention is spent on Degrelle’s journey to Copenhagen at the beginning of May. Besides the Walloons that went into captivity there is also mention of those who tried to go home disguised as industrial, the blank forms supplied by Degrelle to deceive the Belgian authorities, despite ealier claims in his speeches that when returning home “You’ll be in no danger, they’ll be satisfied with having me”.

Over 100 pictures, listed with captions at the beginning, are spread throughout the book’s glossy pages including many period ones known only to a limited number of people but also a number of color photographs showing local reenactors displaying Walloon uniforms in Pomerania. Appendice 1 gives a short overview of casualties suffered in West-Pomerania after which a second one goes deeper into the search of a son trying to find out what really happend to his father, a Untersturmfuhrer at the time. The third appendix contains the 1985 article “Je Veux Parler de Vous, Amis…” by André Regibeau, who commanded 1st company of the 69th regiment, followed by the 4th on Degrelle’s efforts to recruit Spanish volunteers into his battered unit. The final two appendices provide some information on the Walloon’s uniforms and insignia, concluding with the circumstances they faced at the end of the war and some even long after.

You can purchase this book on Amazon (U.S.).