Book Review of Leadership in the Shadows by SGM Kyle Lamb

What do Sun Tzu (“The Art of War), Julius Caesar (“The Gallic Wars”), Antoine­ Henri Jomini (“The Art of War”), Carl Von Clausewitz (“On War”) and Erwin Rommel (“Infanterie greift an”) have in common? They all wrote books on the science of war albeit from “the top down”.

One can be so caught up in their reputation as great military commanders and their books that one can easily forget that they did not start out at the top of the profession of arms and were not born leaders. They, like thousands before them, had to start at the bottom. They had to learn soldiering and then how to lead groups of soldiers starting at the squad level and then progressively larger military formations until they reached the peak of their chosen profession and could write a book telling their contemporaries how to accomplish what they did when they reached the pinnacle. 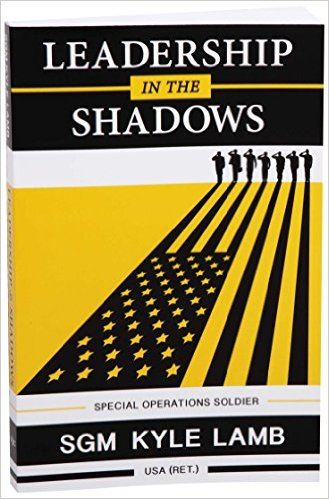 Leadership In The Shadows is about how to build the foundation of commanding small units. Remember the aforementioned vaunted commanders and theoreticians had to perfect commanding and leading the small units and do it superbly before they could move on. They had to be taught how to lead. They weren’t born with the ability to lead and that they could, perhaps, learn faster then others allowed them to reach the height of the profession of arms, become famous and write books instructing others.

This is where Sergeant Major Lamb’s book fills a needed role in the development of the junior leader (like all of those in the first paragraph were at one time). Indeed, Lamb’s book is “ground up” classic the way the books above are “top down” classics. In his book Kyle Lamb instructs the new leader and “wanna be leader” on how to guide, lead and motivate the troops that are under his command. The German Army had “Regulation 300­ Truppenführung (Troop Leading) written in 1933 which listed some 1.032 “rules” to follow for the Army but unlike that book“Leadership in the Shadows” does not list “rules” to follow in every situation. Sergeant Major Lamb realizes that leadership is a flexible and fluid thing and writing from that perspective that can only come from the being in the Army from the ground up shares those principles with the reader in clear, concise and, dare I say, easy to follow procedures complete with examples and the ubiquitous “what ifs”.

The book is 235 pages long and is divided in to sections on leadership as it relates to action, traits, the mission, future leaders, and the “home front”. Sergeant Major Lamb even provides you with a “leadership toolbox”.

While all of his theories, principles and suggestions fit the military life and some can overlap in to civilian life but not all of them, in my opinion, and that is where I disagree with SGM Lamb’s premise that all of his work can be used in all aspects of your life without exception. The military is the military and civilian life is civilian life and they are two different tracks that sometimes run parallel but more often then not diverge with nothing in common.

I can say that I wish I had Sergeant Major Lamb’s book “Leadership in the Shadows” when I was starting out in the Army and certainly wished that I had studied it diligently when I was a Second Lieutenant because it took me until I was a Captain for a few years to learn and put into effect most of what is written in his book.

“Leadership in the Shadows” by Sergeant Major Kyle Lamb should be made mandatory reading at all our service academies and throughout the leadership courses in all our armed services.

You can buy this book on Amazon