The book records the service details of the airmen who took part in the Battle of Britain in considerable detail. Where known, postings and their dates are included, as well as promotions, decorations and successes claimed flying against the enemy. There is also much personal detail, often including dates and places of birth, civilian occupations, dates of death and place of burial or, for those with no known grave, place of commemoration. There are many wartime head-and-shoulders photographs. Inevitably the high achievers who survived tend to have the longest entries, but those who were killed very quickly, sometimes even on their first sortie, are given equal status.

The 2015 third edition will include new names and corrected spellings, as well as many new photographs. Plenty of the entries have been extended with freshly acquired information. The stated nationalities of some of the airmen have been re-examined and, for example, one man always considered to be Australian is now known to have been Irish. 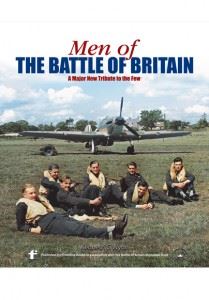 REVIEW: As I love to do research myself in certain units from the Second World War, I’m always happy to receive such adorable “Monumental” books as Men of the Battle of Britain by Kenneth G. Wynn. First published in 1989 (with a second edition published in 1999) this book contains names of over 3,000 airmen (pilots, air gunners up to observers and more…) that participated in the Battle of Britain.

It lists these brave men fully provided with a photograph (if available), a (small) biography of the airman, which squadron he belonged to and all other information you need! Nicely organized in alphabetic order so you have an easy search through this book which weights ca. 3 kg & contains 606 pages. This book is just remarkable reference source and in short: a must have book for all historians and “Battle of Britain” enthusiasts!

You can buy this book on Amazon (UK), Amazon (US) and Pen & Sword Book.

1 thought on “REVIEW: Men of the Battle of Britain by Kenneth G. Wynn”