REVIEW: This book accurately reflects it’s title. Short on words and filled with pictures it shows the SS Commandants and, sometimes, men who manned the concentration camps from 1933-­1945. It gives a brief overview of the development of the GERMAN concentration camp system and how it evolved from a single prison for dissidents and political enemies of the Third Reich to a wide spread system of death and labour camps throughout Nazi occupied Europe.

Great emphasis, in the few written words in this book, is placed on the selection and retention of the guards and their enforcement of the “rules” of the camps and the fact that they were propagandized and, for lack of a better word, “brainwashed” into hating the inmates of the camp. If you did not fit or behave according to the mold you didn’t last as a guard or Commandant in the camp and it was off to the Eastern Front. The mold was fashioned by Theodore Eicke who Himmler got released from a mental institution to become Commandant at Dachau. He set down rigid rules for both guards and prisoners and came up with the well know slogan “Arbeit Macht Frei” meaning you will find spiritual freedom in work not that you would work towards your freedom from the camp. 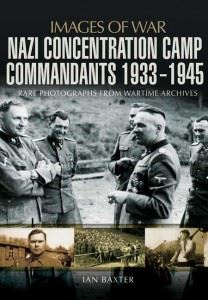 Emphasis is also placed on the fact that the camp Commandants had their only little fiefdoms and that both they and their subordinates enjoyed a life of safety away from any fighting and received extra rations, free housing and other “perks”. It is no wonder that the German Wehrmacht and even the Waffen-SS viewed the concentration camp guards with contempt.

As my Uncle who won the Knight’s Cross put it “we were out there everyday sometimes freezing our asses off and all the time getting shot at and bombed with lousy food, when we got food, and those bastards (the concentration camp guards) were living in luxury and all they had to do was kick a few Jews around”.

Mostly the book is comprised of black and white photographs of various concentration camp commandants some posed some candid and some of parts of the camp themselves. If you are interested in such photography you might consider purchasing this book.

On the downside, Appendix 1 lists the Concentration Camp Commandants in alphabetical order giving their names, date of birth, date of death and a brief synopsis of where they commanded. It does not tell you if they were captured, tried and/or executed. You can kind of piece that together by looking at their dates of death (the closer to 8 May 1945) the more likely they were executed but you shouldn’t have to play that game. Unfortunately even that list starting with Max Pauly and ending with Egon Zill omits the dates of birth and death.

Finally, and this is of some note, the pictures of the commandants and guards show men in uniform that look perfectly normal and if one had to pick them out of a photo array to identify the concentration camp commandants one would be hard pressed to do it. This, however, is a book consisting mainly of photographs and not a how could they do it narrative.