A great battle memoir by one of the 505 soldiers on the ground during The Battle for La Fière Bridge in Normandy. The Battle for La Fière Bridge was key to preventing Panzer and German forces from reaching the beachhead during the D-Day landings. The eye witness, on the ground account by the author details the blood and bold determination of Gavin’s 505 at a crucial time during the fight for Normandy during the D-Day landings. 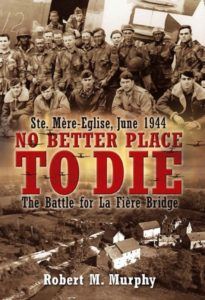 Gavin held the bridge and causeway with determination and grit constantly sending men into harm’s way regardless of loss of life. Some may have regarded this as a reckless loss of life, but most see it as a necessary evil combating the forces of Nazism at the early stages of the invasion of Europe. The author Bob Murphy’s account of the events sheds light on the tough decisions a Commander has to make on the battlefield at the pivotal point of the battle to ensure success. Holding the Fiere Bridge and Causeway cemented the 505th place in History a second time. The 505 had previously jumped into Sicily to turn the tide of the Italian Campaign and would later go on to jump on D-Day and during Market Garden. I can’t think of a unit that is covered in more glory the 82nd Airborne Division’s 505th. The stuff of legends!

If you ever get the chance to visit the site, those from Fort Bragg, will see the “other” Iron Mike statue, that stands guard over the causeway. A great memorial for those soldiers who gave the life during the battle.

Robert M. (“Bob”) Murphy. A Pathfinder and member of A Company, 505th PIR, Bob was wounded three times in action, and made all four combat jumps with his regiment, fighting in Sicily, Italy, Normandy, and Holland. He was decorated for valor for his role at La Fière and is a Chevalier of the French Legion of Honor. After the war, he was instrumental in establishing the 505th RCT Association.

This book is available on Amazon.com (US) and Amazon.co.uk (UK).

1 thought on “REVIEW: No Better Place To Die by Robert M. Murphy”