Peter Schenk’s Operation Sealion: The Invasion of England, 1940 is a detailed analysis of the Third Reich’s planning for the cross-channel invasion of England after the fall of France in 1940. The author takes pains to establish that Hitler relied on the imminent threat of an invasion to win English acquiescence to German hegemony on the continent. He ably makes a case that Hitler viewed Sealion as strategic leverage and establishes the fact that the German High Command, especially senior naval leaders, never considered the invasion of England as a likely to succeed. Senior planners fell prey fears that the Royal Navy would mass sufficient sea power to successfully defend against an amphibious assault. Schenk’s most interesting analysis, however, and the great strength of the book, shows just how much effort lower-level commanders and planners put toward solving the challenges of amphibious warfare. 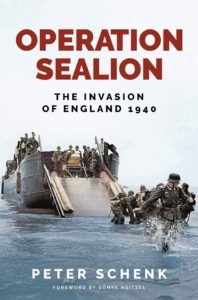 Schenk is at his best describing the level of effort the Germans put forth to create and marshal a collection of modified barges, troop transports, bridging assets and fire support vessels to effect a landing. His use of primary sources, mined from German archives, presents the reader with an impressive amount of information. Schenk emphasizes that the German Army and Navy, with no established joint, amphibious doctrine or proper amphibious equipment, displayed ingenuity and creativity to solve the logistical challenges of moving an army across the English Channel. He excels in telling the story, illustrating his text with an impressive collection of black and white photographs and drawings. His understanding of operational planning is equally impressive. Schenk discusses the necessity for combined arms cooperation inherent in amphibious warfare, the size and composition of proposed landing forces and the operational objectives of the invasion. Here too, he provides an outstanding collection of visual aids that include maps, tables of organization and marshaling plans that complement the text well. Readers who relish details will appreciate Schenk’s efforts.

Operation Sealion: The Invasion of England, 1940 is a comprehensive look at how the Germans planned and resourced what would have been the first large-scale amphibious operation of the Second World War. General readers looking for tales of combat, the soldiers’ view of the war, or human interest may be disappointed and general readers may get lost in the details; however, Second World War enthusiasts or naval warfare specialists who are looking to gain a deeper appreciation of strategic and operational planning will find that reading Operation Sealion is well worth the investment of time.

This book is available on Amazon (US), Amazon (UK), and Pen & Sword Books Ltd