Andrew Rawson’s book covers the struggles and experiences of the Polish Forces and people before, during and after the second World War to include the invasion of Poland, the extermination of the “intelligentsia”, the suppression of the Catholic Poles, slave labor, interrogations, and the massacre in the Katyn Forest of Polish Officers and senior Non Commissioned Officers. All horrific atrocities inflicted by the Germans and Russians. 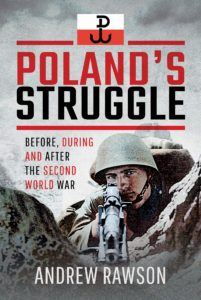 The book starts with the re-creation of the Polish nation after 100 years of suppression under three separate empires. It quickly moves to the destabilization of the government shortly after the Nazi’s came to power in the late 1930s. The German invasion and campaign is covered thoroughly but lacks attention to detail regarding most of the battles and is told from the typical western history perspective wherein the German Forces quickly overran the Polish Forces using blitzkrieg tactics. Truth be told the blitzkrieg tactics were in their infancy and the Germans were halted and stopped numerous times by the defending Polish Forces. The Germans would later go on to evolve their tactics during their later invasions of France, Belgium and the lowlands.

This book has stories of murders, executions, atrocities, brave uprisings and partisan activities which clearly disturbed and upset the German plans for the Polish frontier being their Lebensraum.  As I have commented before, the Polish have a strong spirit which is an innate national stubbornness which few outsiders can comprehend. This stubbornness was clearly demonstrated during and after the Warsaw Ghetto Uprising. An unwillingness to surrender and be treated like a second class citizenry. While Hitler and Stalin conquered the Polish Territory in 1939 and murdered thousands of Poles, they never broke the Polish spirit.  Hitler and Stalin both wanted territory in Poland. Hitler had delusion of Grandeur associated with his Lebensraum theory and Stalin wanted territorial expansion in Poland and the Baltic states to further the spread of communism. History remembers that in 1939 the world turned its back on Poland, especially England and France. It could also be said that they were stabbed in the back and betrayed by England and France who signed pacts to come to their aid in the case of invasion. Neither country helped in any way. They stood by and watched as the German and Russian forces invaded Poland.

Today, after 50 years of brutal occupation Poland has regained its freedom while the previous conquerors have ended up in the trash heap of history. Long live the Polish People!

About the author; Andrew Rawson is a freelance writer who has written over twenty-five military history books. He has written eight books for Pen & Sword’s ‘Battleground Europe’ series and three reference books for The History Press ‘Handbook’ series. He has edited Eyes Only: The Top Secret Correspondence between Marshall and Eisenhower and Organizing Victory: The War Conferences 1941–1945. He has also written a campaign volume of the British Army’s battles in 1914, 1915 and 1916. He has a master’s degree with Birmingham University’s history department. Andrew lives in Mallorca, Spain.