This book primarily focuses on the 3rd Battalion of the 506th Parachute Infantry Regiment, a key contributor to the overall allied airborne assaults during World War II. Although most of the favorable press goes to the 2nd Battalion due to the success of the Book and film, Band of Brothers, any of the airborne infantry regiments could have been the subject of those types of books and films. 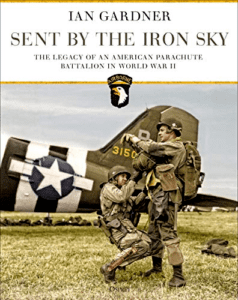 The regiment was initially formed at Camp Toccoa, Georgia in 1942 where it earned its nickname, “Currahees”, after Currahee Mountain which is located inside the boundaries of the camp and became the hill that every paratrooper dreaded to see at Zero dark thirty, every morning for a long PT run. The Cherokee word, which translates to “Stand Alone”, also became the unit’s motto. Members of the unit also wear the spade (♠) symbol on the helmet and the Screaming Eagle 101st patch on the left shoulder sleeve. During World War II, the only commander of the regiment was Colonel Robert F. Sink. The 506th was sometimes referred to as the “Five-Oh-Sink”.

The 506th would participate in three major battles during the war: D-Day, Operation Market Garden, and the Battle of the Bulge. I will focus on one of these battles to highlight the unit.

The unit was directly involved in the Battle of the Bulge in December 1944 – January 1945. While resting and refitting in France after Operation Market Garden, General Eisenhower called upon the 101st Airborne on 16 December to be moved into the Belgian town of Bastogne by 18 December, so that the Germans would not gain access to its important crossroads. The short notice of a move left the unit short of food, ammunition, arms, men, and winter clothing. The unit, along with the rest of the 101st Airborne, was surrounded by the German forces immediately. The 506th was sent to the eastern section of the siege. During the siege, there were reports of problems with tying in the gap in between the 501st PIR and the 506th. To stall the Germans so that the defense could be set up, the first battalion of the 506th (along with Team Desobry from the 10th Armored Division) was sent out to fight and slow down the Germans in the towns of Noville and Foy. One third (about 200 men) of the battalion was destroyed, but in the process had taken out 30 enemy tanks and inflicted 500-1000 casualties. The battalion was put into reserve and the 2nd and 3rd battalions were put on the lines. A supply drop on 22 December helped to some extent. After the Third Army broke the encirclement, the 506th stayed on the line and spearheaded the entire offensive by liberating Foy and Noville in January, until being transferred to Haguenau. They were pulled off the line in late February 1945. 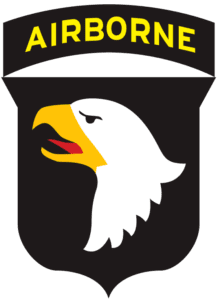 The 101st Airborne Division, to include the battalions of the 506th, was reorganized as Airmobile in 1968, later renamed Air Assault in 1974. During the Vietnam War, five soldiers from the 506th were awarded the Medal of Honor.

The 101st served with distinction and honor most recently in Iraq and Afghanistan with multiple deployments to those theaters of war.

About the author; Ian Gardner served for five years in Support Company, 10th Battalion, The Parachute Regiment as a medic before leaving the Territorial Army in 1993 due to injury. Always enthusiastic about military history, several years after leaving 10 Para Ian became interested in World War II US Paratroopers. After a visit to Normandy in 2000 he decided to focus on the 101st Airborne Division, and in particular the 3rd Battalion of the 506th Parachute Infantry Regiment, which led to the critically acclaimed trilogy Tonight We Die as Men, Deliver Us from Darkness and No Victory in Valhalla. He is also the author of Airborne: The Combat Biography of Ed Shames of Easy Company. Currently self-employed, he is married with two grown-up children and lives near Aldershot in Hampshire.

This book is available on Amazon.com (US), Amazon UK and at Osprey Publishing.