Where does one begin to start the review of this extremely well written, interesting and absorbing book? I have read and re­-read World War II aviation books by Saburo Sakai (“Samurai”) and Hans-Ulrich Rüdel (“Stuka Pilot”) and they were pretty much “the bible” for the best works by a pilot regarding the air war in World War II. Well, just as the “Old Testament” was the only bible for centuries “Shot Down” is the “New Testament” and completely supplants all the other works on the subject.

The author, Steve Snyder, has woven together a tapestry about his father, Lieutenant Howard Snyder, his crew, their backgrounds, the training that they went through, the B­17 in general, the air war in Europe and even a brief history of the First, Second and Third Reichs. 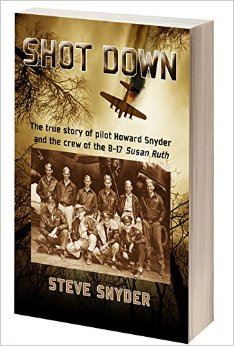 This would seem like an impossible task. How do you weave all that (and more) together and make it interesting, engrossing and make it hold the readers attention. Well, Steve Snyder (the author) has done it. While Sakai and Rüdel (who I had the pleasure of meeting at my Uncle’s place) are focused on pretty much themselves and the aircraft they flew Snyder focuses on everything previously mentioned in the preceding paragraph while not losing his focus on the subtitle of his book.

Want to know the background of Snyder’s B­17 crew? There’s photos and brief biographical sketches of each. Want to know how a B­17G crew layout was configured and the ins and outs of flying one? The training that they went through? The down time? The bombing run? Etc. If you wanted to know everything about what a bomber crew went through “up close and personal” this is the book for you. Snyder was even shot down and fought with the Belgian resistance until “liberated” by Patton.

Steve Snyder weaves the story of his father and his crew through this in such a way that you start thinking of them as the U.S. Army Air Corps “Band of Brothers” and I felt a kinship to those guys that I haven’t felt since my days back in the armies of the United States and Rhodesia. Steve Snyder has brought the crew of the “Susan Ruth” to life and put you there right in with them while at the same time keeping the reader in synch with the times and what’s going on around them in the world. Did I mention he tells the reader how the 918th Bombardment Group of the movie “12 O’Clock High” got its designation? Not to mention where the term “12 O’Clock High” originates? And all this and more without breaking the flow of the story or losing the reader’s interest.

When the “Susan Ruth” gets shot down you’re pulling for all of them that is how deep you’re drawn into this book. I was furious when I read how some of the crew were treated by their captors and I usually just go “ho hum” when I read stuff like that in other books. This crew in general and Howard Snyder it appears are among “the greatest” of “the greatest generation”.

I could go on and on about what is in this book but then I would give away the whole book and that’s not the purpose of this review which is to see if this book is a good one. It is better than good. It is GREAT.

I would highly recommend that you get and read a copy of this book. Buy, beg, borrow or steal it. I have my copy and it’s going right on my display shelf next to but ahead of Sakai’s “Samurai” and Rüdel’s “Stuka Pilot”.

1 thought on “REVIEW: Shot Down by Steve Snyder”