The impressive list of contributors to The Sniper Anthology includes Mark Spicer writing on Harry M. Furness, the last surviving British sniper who went ashore on D-Day; Martin Pegler, who details the famous Soviet sniper Vassili Zaitsev; Adrian Gilbert on the Wehrmacht sharpshooter and lone wolf Sepp Allerberger; and Roger Moorhouse on Simo Hayha, the man with the most confirmed kills in any major war.

The authors of this book is like a who’s who of sniper and military history. Their separate articles on the snipers of World War Two must have been agreed upon ahead of time. As these stories and individual histories were combined the resulted in a great reference book that every Military Historian should have on their bookshelf. Throughout the book the authors cover the details and history of the following Snipers, Simo Hayha, Lyudmila Pavlichenko, Bert Kemp, Vassili Zaitsev, Clifford Shore, Sepp Allerberger, Patrick Devlin, and Harry Furness. 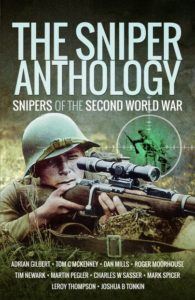 An interesting fact is that not a single sniper’s memoir appeared in the English Language until a decade ago! World War Two snipers often were condemned as cold hearted killers who took lives without risking their own. Snipers often hid their identities during and after the war. It wasn’t a popular job. In recent history that attitude and approach has changed. Today they are recognized as the peak of soldier skills requiring cunning, expert fieldcraft, and worthy elite soldiers that receive high praise from commanders down to the individual soldier. In an ironic twist, the sniper’s worst enemy, his nemesis is the enemy sniper who is on the lookout for the other snipers on the battlefield. Most times this is a one on one competition for the ultimate kill. The final, decisive shot to determine who is the best.

About the authors; Roger Moorhouse is a historian of the Third Reich. He is the author of the acclaimed Berlin at War, The Third Reich in 100 Objects and has been published in more than 20 languages. He is also a tour guide, a book reviewer and a visiting professor at the College of Europe in Warsaw. You can follow him on Twitter at @Roger_Moorhouse.

Martin Pegler was curator of firearms at the Royal Armories for twenty years and during his career shot almost every historic and current sniping rifle. He is the author of a dozen books about firearms but specializes in the development of the sniper and technology of sniping. He lives in France with his wife.

Charles Sasser is a veteran of both the U.S. Navy (journalist) and U.S. Army (Special Forces, the Green Berets). His many other books include Raider and Patton’s Panthers, and he was a contributor to Frontline’s the Sniper Anthology.

Mark Spicer is a foremost sniper instructor who has trained snipers of many of the world’s military and paramilitary forces, including the US Marine Corps and Britain’s SAS. He was the expert witness during the ‘Washington Beltway Sniper’ trials, and also writes and broadcasts on the art of sniping in war and antiterrorist environments.

Leroy Thompson is one of the world’s leading authorities on special army and police units. He is the author of several books on the subject including The Bodyguard Manual, The Hostage Rescue Manual and Secret Techniques of the Elite Forces. He lives in the USA.

The other authors of this book were, Adrian Gilbert, Lt Col. Tom C McKenney, Dan Mills, Tim Newark, Joshua B Tonkin, and the Introduction was provided by John Plaster.