An excellent history of “Det A”. A Special Forces unit with about 100 personnel stationed in Berlin which at that time was in the middle of East Germany! This unit and its personnel were considered legend over the years in the Special Forces community in the US and Europe. Shortly after World War II and as the cold war was getting more intense the US planners assumed that the Russian Armor and Shock Troops stationed along the German border 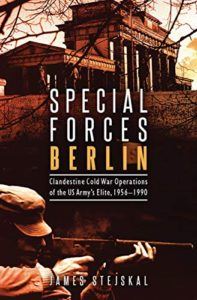 would quickly overrun the US and allied forces in western Europe. This is what the Russians trained for and this is what the Americans and allied forces trained for. Along with these operational plans were strategic plans to leave behind multiple Special Forces detachments trained for stay-behind operations. These were desperate times and called for desperate measures. These Special Forces soldiers were deep in enemy territory and had no plans to evacuate. They planned on staying behind and organizing and conducting guerilla operations to disrupt Russian communications and rear echelon operations. As a note, there were no blacks, Hispanics, or any ethnic looking men assigned. There were all white, European, German-speaking operators. As the detachment’s legend grew over the 60s and 70s this was one of the rotation assignments for some of the elite special forces team members stationed stateside. Bear in mind they would not take anyone. You had to be one of the best of the best to get this assignment. Once you had this assignment and proved you could fit in you became part of the elite within the elite. Legend status.

As the US and European armies were forming anti-terrorist groups and other special forces units they would often work side by side with Det A. The Det A personnel quickly became known as the go-to Anti-Terrorist teams for the US. Their ability to work side by side with units like the SAS, CIA, Delta, GSG-9, 10th SF in Bad Tolz, without causing problems or rework in their plans, quickly earned them professional respect.

Growing up as a young soldier in the Special Forces community at Fort Bragg I was fortunate enough to know people that had already been assigned to Det A and returned to the US for another assignment. I would also run into some of these legends in the GB club (Green Beret Sport Parachute Club) on Smoke Bomb Hill. We would offer them a beer or shake their hands. That’s about it. Mainly these were humble men and did not ever brag about their work, assignment, etc. That’s just the way it was.

This unit was deactivated in the 1990s after years as serving under many names and locations throughout Berlin and the surrounding areas. If you’re a fan of special forces you should read this and pick up this book for your library. You won’t regret it. It represents the US military at its finest.

This book is available at Amazon.com (US), and Casemate Publishing.

About the Author – James Stejskal is an author, military historian, and conflict archaeologist. To gain inspiration and research his writings, he spent 35 years serving with the US Army Special Forces and the Central Intelligence Agency in such interesting places as Africa, Europe, the Balkans, the Near and the Far East