One hardly knows where to begin in summarizing this magnificent book by Hans Schmidt who was born in Germany in 1927 and died – as American citizen for 55 years – in 2010.

This book blends first person historical narrative, historical facts, sociology, the “problems” of current day America in a extremely readable, fast paced, engrossing and, as near as I can tell, historically accurate and insightful manner as it relates to Germany (then and now), World War II and the current day United States.

The book’s prologue opens with a firefight or rather an ambush massacre of SS troops on January 12, 1945 in which the author barely escapes with his life. Schmidt sets a pattern in the prologue which will carry through the entire book. He accurately portrays what goes on and then through footnotes and incorporating it in to the narrative goes beyond the mere description of the events by noting that, for example, the American troops who had sprung the ambush on his SS patrol did not have to keep firing for hours on an exposed, disabled and wounded German pleading for help noting that “the Allies did the same things in the heat of battle that they condemned the Germans for”. 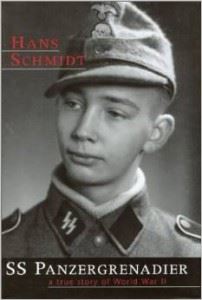 The “real story” begins in 1943 when Hans Schmidt son of a Nazi Party member enlists in the SS rather then get drafted into the Wehrmacht. He was blond haired, blue eyed, physically fit and a regional group leader in the Hitlerjügend and as such just the material the SS wanted in their ranks. In fact, they took him in heartbeat but had to wait to officially enlist him until he did his compulsory labor service. Sounds routine, trite and boring so far, right? Well nothing could be further from the truth. Schmidt makes it into an adventure rich with details. He even goes so far as to note the exact rations given to the teenagers in his RAD (Reichsarbeitsdienst=Empire Labor Service) and the weapons issued to them for that portion of their service that required weapons training, etc. In fact everything that you would every want to know about RAD service spiced up with some lively first person experiences are here (re­-enactors take note, you won’t find a better book for the details of the SS uniforms or weapons but for the “farbie” types you will get sick as to some of the uniform variations that Schmidt and his friends practiced and got away with).

Schmidt then gets down to the nitty gritty SS training and service in the ranks on both the Eastern and Western fronts in first person narratives and documented historical observations that will go against many things that the victors have passed down to us as historical “gospel”. One example that he give is the “Malmedy Massacre”, which it appears after an exhaustive GERMAN investigation, revealed that poor searching by the Germans left the GI prisoners with some sidearms which they used to take pot shots at the SS columns going by them. This resulted in not one but two firefights at the Malmedy Crossroads before the prisoners were suppressed. (Here Schmidt notes that Malmedy was very similar to our Mai Lai)

This is only one example Schmidt gives of the Allies posing as “holier than thou” and the “ crusading white knights” but in order to find out more of this aspect of the book you are going to have get a copy and read it but believe me there are more than a few examples and you will have your eyes opened. Schmidt also tells of the actions and life of an officer cadet in the Waffen SS which is different from what it would be in the Allied Armies at the time as one served their cadetship in the enlisted ranks and was only a supernumerary leader should losses in the chain of command dictate the officer cadet taking charge. He makes the stresses that the Waffen-SS was an elite fighting force and that one became very close to one’s comrades. If you and they survived you had an extremely close friend and comrade for life.

He notes that in the Wehrmacht (Army) you had colleagues but in the SS you had brothers in arms who didn’t forget you if you were wounded and in hospital. I can personally attest to this having been in the US Army where I had mission oriented colleagues who could care if I lived or died as long as the mission was carried out and in the Rhodesian Army were you were part of a “band of brothers” who put the mission first but were concerned about you and you about them.

Schmidt was wounded three times and he goes into detail about the German military medical establishment right down to how they saved, cleaned and serviced the uniform you were wounded in (if it were possible) down to putting the bullets or shrapnel (in Schmidt’s case) in the pocket of the uniform so you had a souvenir of the “one that had your name on it” to take with you when you left the hospital.

This is a really great book. It held my interest and since it was about land forces I was able to identify with the situations and lifestyle that Schmidt describes and get some very good insight (which is documented) that the so called “Good War” that the Allies fought was not only a “Good War” but a war of survival from the German point of view. It did not take too much to compare and contrast what was contained in “SS Panzergrenadier” with the real life of a professional soldier who has “been there and done that”.

This is the autobiographical true story and personal narrative of the German side of WWII. The author recounts the reasons that led him to decide to join the Waffen-SS in 1943 at the age of 16. He details his service in the German Labor Service (RAD) prior to induction into and training with the W-SS in 1944. The author recounts his extensive schooling prior to posting with the Leibstandarte SS Panzer Div., and his personal experiences in combat with the unit in the Ardennes and the final battles on the Eastern Front in Hungary, ending with American captivity. HB, 20 previously unpublished photos from author’s collection, over 400 pages.