Wolfgang’s book covers the story of Colonel Stauffenberg’s plot to overthrow Hitler’s regime and his assassination attempt on Hitler. A conspiracy that started early in World War II but did not come to fruition until late in the war. It begs the question: Was the attempt too late to have had any impact on the outcome of the war? If the assassination attempt had killed Hitler would the Allies have accepted anything other than an unconditional surrender? Would the allies have accepted a new German Regime born out of this internal conspiracy?

Claus Philipp Maria Schenk Graf von Stauffenberg (15 November 1907 – 21 July 1944) was a German army officer and member of the German nobility who was one of the leading members of the failed 20 July plot of 1944 to assassinate Adolf Hitler and remove the Nazi Party from power. Along with Henning von Tresckow and Hans Oster, he was one of the central figures of the German Resistance movement within the Wehrmacht. For his in the movement, he was executed by firing squad shortly after the failed attempt known as Operation Valkyrie. 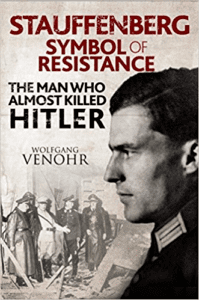 In his autobiographical Bis zum bitteren Ende (“To the Bitter End”), Gisevius writes: Stauffenberg wanted to retain all the totalitarian, militaristic and socialistic elements of National Socialism (p. 504). What he had in mind was the salvation of Germany by military men who could break with corruption and maladministration, who would provide an orderly military government and would inspire the people to make one last great effort. Reduced to a formula, he wanted the nation to remain soldierly and become socialistic (p. 503).

Stauffenberg was motivated by the impulsive passions of the disillusioned military man whose eyes had been opened by the defeat of German arms (p. 510). Stauffenberg had shifted to the rebel side only after Stalingrad (p. 512). The difference between Stauffenberg, Helldorf and Schulenburg — all of them Counts — was that Helldorf had come to the Nazi Movement as a primitive, I might almost say an unpolitical revolutionary. The other two had been attracted primarily by a political ideology. Therefore, it was possible for Helldorf to throw everything overboard at once: Hitler, the Party, the entire system. Stauffenberg, Schulenberg and their clique wanted to drop no more ballast than was absolutely necessary; then they would paint the ship of state a military gray and set it afloat again (p. 513–514).

After several unsuccessful tries by Stauffenberg to meet Hitler, Göring and Himmler when they were together, he went ahead with the attempt at Wolfsschanze on 20 July 1944. Stauffenberg entered the briefing room carrying a briefcase containing two small bombs. The location had unexpectedly been changed from the subterranean Führerbunker to Albert Speer’s wooden barrack/hut due to it being a hot summer’s day. He left the room to arm the first bomb with specially adapted pliers, a task made difficult because he had lost his right hand and had only three fingers on his left. A guard knocked and opened the door, urging him to hurry as the meeting was about to begin. As a result, Stauffenberg was able to arm only one of the bombs. He left the second bomb with his aide-de-camp, Werner von Haeften, and returned to the briefing room, where he placed the briefcase under the conference table, as close as he could to Hitler. Unknown to Stauffenberg he had placed the bomb next to a large wooden leg of the table that shielded Hitler from the blast. A simple act of fate had gotten in the way of assassinating, arguably, the vilest man in history! Some minutes later, he excused himself and left the room.

When the explosion tore through the hut, Stauffenberg was convinced that no one in the room could have survived. As a result, four people were killed and almost all survivors were injured.

Stauffenberg and Haeften quickly left and drove to the nearby airfield. After his return to Berlin, Stauffenberg immediately began to motivate his friends to initiate the second phase: the military coup against the Nazi leaders. When Joseph Goebbels announced by radio that Hitler had survived and later, after Hitler himself personally spoke on the state radio, the conspirators realized that the coup had failed. They were tracked to their Bendlerstrasse offices and overpowered after a brief shoot-out, during which Stauffenberg was wounded in the shoulder.

Colonel Stauffenberg, his aide Lieutenant Werner von Haeften, General Friedrich Olbricht, and Colonel Albrecht Mertz von Quirnheim were executed before 1:00 in the morning (21 July 1944) by a makeshift firing squad in the courtyard of the Bendlerblock, which was lit by the headlights of a truck.

Fromm ordered that the executed officers (his former co-conspirators) receive an immediate burial with military honors in the Alter St.-Matthäus-Kirchhof in Berlin’s Schöneberg district. The next day, however, Stauffenberg’s body was exhumed by the SS, stripped of his medals and insignia, and cremated.

About the author; Born in Berlin in 1925, WOLFGANG VENOHR held a PhD in history and worked as a journalist and freelance writer. For many years he was editor-in-chief of Stern TV. The author of numerous television films and published works, including Uprising of the Slovaks, The Freedom Fight of 1944, and Patriots vs. Hitler – The Way to July 20, 1944, Venohr’s work earned him the Jakob Kaiser Prize in 1972 and the Joseph E. Drexel Prize in 1979. He died in Berlin on 26 January 2005.

This book is available on Amazon.com (US) and Amazon (UK).