An excellent book that covers 9th Infantry Division LRRPS deployments and missions by his team during the Vietnam War. The author Jim Thayer does an outstanding job of covering all the things that make being a LRRP soldier into focus, the long deployments, the difficult missions, weapons and equipment modifications, special uniforms, and the learned restraint of surveillance of the enemy versus direct contact. The value of the LRRPs type of soldiers and the incredible intelligence assets they bring to the Area Commander has always been a huge asset and eyes forward for Corps or Division Intelligence. Having LRRP eyes and ears on the ground can be a huge difference maker when committing conventional forces to the battle. 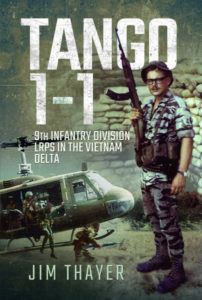 Long-range reconnaissance patrols, or LRRPs (pronounced “Lurps”), are small, heavily armed long-range reconnaissance teams that patrol deep in enemy-held territory. The concept of scouts date back to the origins of warfare itself, however, in modern times these specialized units evolved from examples such as the Long Range Desert Group and Special Air Service in the Western Desert Campaign and North West Europe and similar units such as Force 136 in the Far East during the Second World War.

The US Army long-range reconnaissance patrol concept was created in 1956 by the 11th Airborne Division in Augsburg, Germany. They patrolled near the Czechoslovakian and East German borders, then members of the Communist Warsaw Pact states, and in event of war in Europe would be inserted behind enemy lines to provide surveillance and to select targets of opportunity. The LRRP concept was well known throughout the Army though concentrated in 7th Army in Germany. After the 11th Airborne Division returned to the US, the Department of the Army authorized two Airborne LRRP companies in 1961, Company D and C in the Wildflecken and Nellingen Barracks (near Stuttgart), and were respectively assigned to V Corps and VII Corps. In 1963 V Corps LRRPs (Company D) transferred to the Gibbs Kaserne in Frankfurt near Corps HQ. In 1965 these companies developed the first LRRP Table of Organization and Equipment and in doing so increased their strength to 208 men, team size from 4 to 5 men, as well as adding an organic transport component. All LRRPs from team leader and above were to be Ranger qualified. The experiences of these two companies formed the basis of the first US Army LRRP manual. Both companies used carrier wave (Morse Code) radios including the AN/TRC-77 for long-range communications to their respective Corps G2 (Intelligence) center. In 1968 both companies were transferred to the United States, but neither were sent to Vietnam because they retained their status as LRRP units for V and VII Corps in the event of war in Europe.

On July 8, 1966, General William Westmoreland authorized the formation of a (LRRP) unit in each infantry brigade or division in Vietnam. By 1967 formal LRRP companies were organized, most having three platoons, each with five six-man teams equipped with VHF/FM AN/PRC-25 radios. LRRP training was notoriously rigorous and team leaders were often graduates of the U.S. Army’s 5th Special Forces Recondo School in Nha Trang, Vietnam.

Since satellite communications were a thing of the future, one of the most daring long-range penetration operations of the war was launched by members of the 1st Air Cavalry Division’s, long-range reconnaissance patrol, against the North Vietnamese Army when they seized “Signal Hill” the name attributed to the peak of Dong Re Lao Mountain, a densely forested 4,879-foot mountain, midway in A Shau Valley, so its 1st and 3rd Brigades, who would be slugging it out hidden deep behind the towering wall of mountains, could communicate with Camp Evans near the coast or with approaching aircraft.

In February 1969, all US Army LRRP units were folded into the newly formed 75th Inf

antry Regiment (Ranger), a predecessor of the 75th Ranger Regiment, bringing back operational Ranger units for the first time since the Korean War. The Army had disbanded Ranger units after Korea, but kept the Ranger School, on the premise that spreading Ranger School graduates throughout the Army would improve overall performance.

The art of long-range patrolling and the skills and tactics of the Vietnam LRRPs set the standard for today’s Long-Range Surveillance (LRS), Ranger, and Marine Reconnaissance units.

About the author. Jim Thayer served in the LRPs of the US 9th Infantry Division in 1968-69 in the war in Vietnam. He was highly decorated for his bravery in combat, (Silver Star, 3 Bronze Stars with ‘V’, the Vietnam Cross of Gallantry, 2 Air Combat Medals, and 3 Purple Hearts). Thayer was severely wounded in combat but recovered and went on to a career in law enforcement after Vietnam. He sadly passed away in January 2020.

This book is available on Amazon.com and Pen and Sword Publishing.

[1] Taken from an internet article at https://military.wikia.org/wiki/Long-range_reconnaissance_patrol