REVIEW: The premise for this particular book is an interesting one; rather than a straightforward battalion history, the book is based on a page from ‘The Brigade’, the magazine of the Church Lads’ Brigade battalion, dated August 1917. This page shows pictures of eight men from the battalion who had been wounded, including the author’s uncle. The book is based around her journey to find out more about these men.

The book starts off well enough, with a history of the King’s Royal Rifle Corps as a whole, before looking at the formation of the Church Lads’ Brigade and associated battalion, raised soon after war broke out from serving and former members of the Brigade. Brief details of the lives of the eight before the war are given, along with pen portraits of some of the other men who served in the battalion and were killed.

Unfortunately, the book quickly unravels from this point. Rather than the battalion history I was expecting, detailing its movements and battles and further information about the service of the eight men, we are instead given a very potted chronology of the war. Whilst some of the text focuses on the movements of the 33rd Division (of which the 16th KRRC was part), even this is not consistent. For example, a chapter titled ‘1915: The 33rd Division’ includes sections on trench foot, lice, gas, and shellshock; confusingly the division’s attacks on the Somme in 1916 are also included, as are its movements in 1917 and 1918, and in fact there are only three pages in the chapter that deal with the division in 1915. 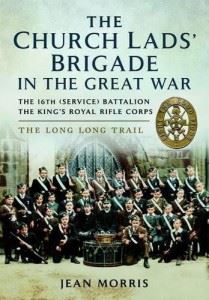 The following chapter deals in more ‘detail’ with the Somme, although the battalion’s costly part in the attack on High Wood on 15th July merits just one short paragraph. A chapter titled ‘Race to the Sea’ follows the chapter on 1917, covering the events of the opening stages of the war in 1914. The author seems to have confused the ‘race to the sea’ with the naval war, as the rest of the chapter uses the term in this context whilst looking at the naval engagements and U-boat campaign, erroneously stating “the Race to the Sea was the actual explanation for Great Britain’s entry into the war.”

Unfortunately this is not the only error encountered in the book. There are just too many generic statements given – the British had more artillery than the Germans; all burials were carried out at night – without any evidence or sources provided. A ‘shot at dawn’ case in the 16th KRRC is very briefly looked at, with the assertion that he was “brutally and mercilessly executed” without any further examination of the case. Whilst many pictures are included, only a few directly relate to the battalion. All the others are generic, and in some cases are captioned incorrectly (for example the famous picture of soldiers resting in Mons is captioned ‘British soldiers waiting to embark’). In addition the text ascribes many thoughts and feelings to the men but it is not clear if these are taken from actual sources, or merely postulated by the author; some footnotes would not have gone amiss.

2 thoughts on “REVIEW: The Church Lads’ Brigade in the Great War by Jean Morris”