As we approached the anniversary of the Gallipoli landings it felt natural to me to select this book for reading, the first thing that caught my attention was its size, at 334 pages it’s by no means a short novel. Without even reading the back cover from the moment you pick up the book you know it will be an interesting read, Leonard Sellers has went above and beyond by writing this book which like many, it was intended for a personal interest before becoming a book.

From the moment you turn the first page you realize that it is a well-structured book which can be used as either as a book in which you can simply sit down and read following the story from the beginnings and the ideas of the royal naval division to its disbandment and its legacy or it can be used as a point of reference book for individual time frames throughout the divisions short 4 year history which was created by Winston Churchill who at the time of the division’s establishment was the first lord.

Leonard Sellers has created a very well written divisional history but also in the same sense has given the book a more human feel by using poems and personal extracts in this immaculate book of a division which sadly doesn’t get as much credit as the regiments who they served alongside such as the highland division at the battle of Ancre. 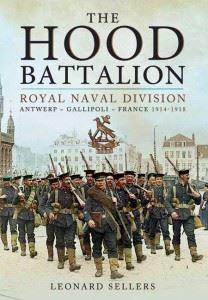 As said before one thing I liked about this book is its structure by breaking it down Leonard has given the reader an easy to follow guide to the division by splitting it into three main sections (Early Years, Gallipoli & Western front and disbandment), this also includes maps and also pictures throughout the book which gives a clearer picture of the division and also its campaigns. The early years give an interesting insight into the establishment but this is where one of my criticisms about this book is that Antwerp could have been made bigger than one chapter whereas the other campaigns are larger and take more detailed but the book does make you think about the fact that many of these sailors turned soldiers from the royal navy reserved envisioned they would serve out the war fighting on ships rather than in the trenches of no man’s land.

My only other criticism with this book is that it does not have a glossary of terms to things like first-line- of-transport kit which I personally feel would help the end user. Given at the time of this review, Gallipoli is exactly a hundred years ago and rightly so it is given to a large section of this book, 9 chapters which it breaks it down into stages from the planning & build up to the actual landings upon the shores of which would be a failed campaign for Great Britain and her allies. We are also given two maps printed in the front of the book to aid us through the campaign for reference.

At this stage in the book we begin to see figures such as deaths, wounded and missing but also of officers who served within the division at that stage of the campaigns before moving onto the second landings and the evacuation of Gallipoli in the third and final part of the book takes into the western front which had been ongoing for two years by the time the hood battalion had evacuated Gallipoli and onto the restructure as they entered France and onto the battle of Ancre before moving Gavrelle and Passchendaele and sadly onto the disbandment which has been given its own chapter within the book.

Another nice touch is within the references as its breaks it down by not only chapter but also by page. One thing I felt that was a nice touch and is rather touching is the muster roll at the back which will keep people for years to come with their own research as genealogy becomes more popular and readily available via online sites and records being downloadable from the national archives website.