BOOK: The Oder Front 1945: Generaloberst Gotthard Heinrici, Heeresgruppe Weichsel and Germany’s Final Defense in the East, 20 March – 3 May by A. Stephan Hamilton.

Nazi Germany’s fall is regularly depicted through the dual images of Adolf Hitler directing the final battle for Berlin from his claustrophobic Führerbunker, and the subsequent Soviet victory immortalized by the flying of the ‘Hammer and Sickle’ over the burnt-out Reichstag. This popular view, that Germany’s last battle of World War II was a deliberate, yet fatalistic, defense of Berlin planned and conducted by Hitler, is largely a historically inaccurate depiction that fits a popularized characterization of the Third Reich’s end.

Germany’s final battle began when Generaloberst Gotthard Heinrici took command of Heeresgruppe Weichsel (Army Group Vistula) on 20 March 1945, not when the massive Soviet offensive intended to capture Berlin was launched on 16 April. Heinrici, not Hitler, decided that there was only one strategic course left for Germany-hold the Soviets back along the Oder Front long enough to entice the Western Allies across the Elbe River. Heinrici knew two things: the war was lost and what remained of Germany was destined for postwar Soviet occupation. His intent was that a protracted defense along the Oder Front would force General Eisenhower to order the Western Allies into the postwar Soviet Zone of Occupation outlined in the Top Secret Allied Plan known as ‘Eclipse’, thereby sparing millions of Germans in the east the dismal fate of Soviet vengeance everyone knew was at hand. Berlin, Heinrici ordered, would not be defended. The capital of Germany would not become another ‘Stalingrad’ as Heinrici told his subordinates. A decision by OKW on 23 April to defend Berlin in a final decisive battle forced Heinrici into direct conflict with his superiors over the conduct of operations along the Oder Front -a conflict that undermined his capability to defend against the Soviets and ultimately cost Heinrici his command.

In a companion volume to his successful and highly-regarded study of the Soviet assault on the city of Berlin, Bloody Streets, author A. Stephan Hamilton describes the planning and execution of the defense of the Oder Front, reconstructing it day-by-day using previously unpublished personal diaries, postwar interviews, Heeresgruppe Weichsel’s war diary and daily command phone logs. Operations of the 3.Panzer Armee, 9.Armee, 12.Armee, and 21.Armee are covered in detail, with their unit movements depicted on over 60 wartime operational maps. The narrative is supported by an extensive selection of appendices, including translations of postwar narratives relating to Heeresgruppe Weichsel penned by senior German officers, biographical notes on notable officers of the Heeresgruppe, and highly detailed orders of battles. In addition to a number of b/w photographs, this study features 64 pages of operational maps reproduced in full color. 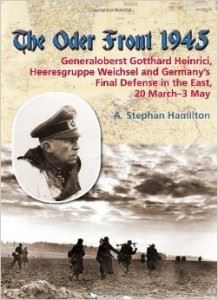 REVIEW: The first in Hamilton’s series on Germany’s desperate fight on the Eastern Front in the last 5 months of WW2, in this book the author focuses on its operational level from March to May 1945. While defenses in the West crumbled the famed tactician Gotthard Heinrici conducted a determined defense in the East to save the most Germans possible from the expected Soviet vengeance. To this end, after taking over Heinrich Himmler’s troublesome command of Armygroup Vistula on 20 March 1945, he preferred a tenacious defence along the Oder Front to save Berlin itself from becoming another “Stalingrad”. Despite causing the Soviet’s higher loss in manpower then at Stalingrad and equipment at Kursk, his willingness to defy orders he deemed immoral or near suicidal, as earlier in the war, put him at odds with Hitler.

Part 1 offers a background to the battle by describing Germany’s general Late War Strategy from June 1944 onwards and outlining Armygroup Vistula’s history up to the point is was taken over by Heinrici. The man himself is also looked at in more detail here, from his experiences at the Eastern Front in WW1 through to those in WW2, character and ideological traits. The part is closed with a chapter on how the latter influenced his decisions when faced with certain orders from his Nazi chiefs throughout the war.

The preparations leading up to the battle in mid April are covered in Part 2 of the book where the author sketches the commander’s intent, the terrain, dispositions and objectives of the armies facing each other. The last offensive operations of the Armygroup around Küstrin and fight against the Soviet bridgeheads are also discussed before going deeper into the operational planning for Heinrici’s defensive Oder Front. In these chapters the contrast is shown between Hitler’s and Heinrici’s defensive doctrines, the latter’s defence in depth and state of the formations available to him at this stage of the war. Extensive attention is given to the important meetings they had in the beginning of April inside the Führerbunker, where Goering, Himmler and Dönitz all promised extensive reinforcements to Heinrici in an effort to outdo each other in front of their Führer. Most importantly he received Hitler’s full authority there to develop a flexible defense for which Heinrici had already prepared without him knowing.

Through many operational reports, telephone logs, interviews etc. Part 3 contains a day by day overview of the battle that broke loose in mid April along the Oder Front until early May, a few days after Heinrici was relieved from command by Keitel. In the center of the book are 65 German strategic maps and details of them in reasonable quality, for the most part showing positioning on a divisional scale. In the next chapter the demise of Armygroup Vistula and subsequent fragmentation of the Oder Front in the final days of the Reich is looked at in detail, followed by assessments on Heinrici’s defensive operations.

In the short final Part 4, the author focuses on the heavy cost of Soviet vengeance such as the near total destruction of Berlin that Heinrici had worked so hard to prevent and subsequent evolution from Soviet occupied zone into the DDR. Concluding with many interesting appendixes including orders of battle and military studies on the desperate final battles of Armygroup Vistula this book offers anyone looking into this chaotic period a superb guide on the subject. It conveys well how this general, despite the seemingly hopeless struggle, remained committed to achieve one of Stalin’s driving fears; the Western allies reaching Berlin before he did.

You can buy The Oder Front 1945 (Volume 1) on Amazon (US), Amazon (CA) and Amazon (UK) or on Helion. Find here an interview with A. Stephan Hamilton.

Part 2 is now available on Amazon (US), Amazon (CA) and Amazon (UK)