World War I was a slaughter on an unprecedented scale. Nevertheless there was no shortage of young men willing to sacrifice themselves for their country. Some lied about their age to join up, not just at the start of the war when it was seen as a glorious adventure, but even towards the end when the true horror of the mechanized butchery was known to one and all. This book concerns the young men who were not yet twenty when they won the Victoria Cross, the British armed forces highest award for gallantry.

Many perished in the action that earned them the VC. Others survived to receive the award, but then went on to die later in the war. One was as young as sixteen. Several were just eighteen, though they were supposed to be nineteen before they were allowed to serve overseas. They were sailors and airmen, as well as soldiers, and they came from Britain, Ireland, Australia, Canada, Nepal and India. Each one demonstrated an exceptional nerve and bravery. While some did survive World War I – even going on to serve in World War II – they showed an reckless indifference to death that made them Too Brave to Live, Too Young to Die. World War I has been over for nearly a hundred years now, but the tales of their valour live on. These men and their exploits deserve to be remembered – in the hope that young men will never be called on to do such things again. 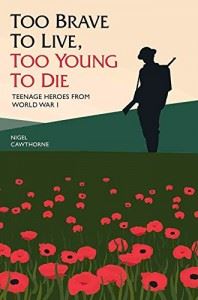 REVIEW: The Victoria Cross as the highest award for gallantry is well documented and there are many different volumes available that cover the deeds for which it was won; by individual, conflict, theatre of war, and nationality amongst others.

This volume takes a slightly different stance by looking at the VC recipients who were aged under 20; the ‘teenage tommies’ of the war. When age is overtly brought into the picture, it makes some of the deeds that led to the award of the VC seem even more courageous. It leads to further questions too; was it their youthful enthusiasm, naivety, or patriotism that spurred them on?

The book covers 28 VCs, nine of which were awarded posthumously. Australian, Canadian, and Indian soldiers feature alongside the British recipients, and the Navy and Royal Flying Corps are represented alongside the more numerous army awards. Some will be well-known to many readers, such as Jack Cornwell who received his award posthumously for staying at his gun on HMS Chester during the Battle of Jutland. The press at the time certainly used his young age (at 16 the youngest to have been awarded a naval VC) as a focal point for their stories, and his name was used in recruitment and fundraising campaigns.

Sidney Woodroffe is another well-known name; he gallantly led his men in resisting the first German flamethrower attack at Hooge in July 1915 – at action in which he lost his life, at the tender age of 19. But just six of the VC winners who stories are told here were officers; the remainder were ‘other ranks’ who probably thought they were just doing their bit, rather than trying to win a gallantry award.

Reading about the VC awarded to Second Lieutenant George Moor, Hampshire Regiment, who rallied retreating troops at Gallipoli and reputedly shot four of his own men, makes for uneasy reading at the best of times; when you learn that Moore was just 18 at the time, it becomes even more so. He was the youngest officer awarded the VC during the war, but it was certainly not a one-off occurrence of courage or recklessness. He would later be wounded, and was awarded the Military Cross and Bar for further acts of gallantry. He was to lose his life during the war, not at the hands of the enemy, but from pneumonia, just a week before the Armistice.

Whilst this is an interesting and well-written work, the lack of any maps, photos, or illustrations is disappointing. There is a wealth of visual material available that can help illustrate these stories, but unfortunately none appear in this work. References and a bibliography are not provided, although the material looks to have been gathered mainly from the obvious sources of the London Gazette, newspaper reports, and obituaries.